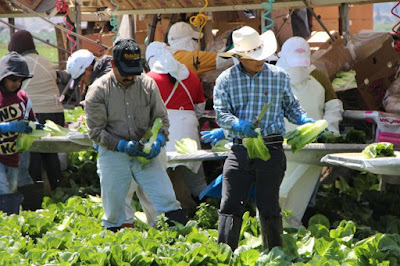 The Adverse Effect Wage Rate is the mandated wage rate for farmers who use the H-2A program.

H-2A is the visa program farmers use to hire legal foreign seasonal workers to supplement their U.S. workforce.

Farmers who hire even a single H-2A worker must also pay the AEWR to every American worker as well if it is higher than what they would otherwise receive. Except for Alaska, each state has its own AEWR, which run from $11.71 to $15.83 per hour in 2020 (based on 15 regions). State minimum wages start at the federal minimum of $7.25 hourly and go to $13.50 in the state of Washington.

According to David Bier at the Cato Institute, in every state, the AEWR far outstrips every state minimum. The average difference between each state’s AEWR and its minimum wage is 57 percent in 2020. In Iowa, Indiana, Kansas, New Hampshire, North Dakota, Utah, and Wisconsin, the AEWR is fully double the state minimum wage. In 2020, DOL is raising the straight average by 5.5 percent from $12.96 to $13.68 hourly. Every state will see the AEWR increase with Ohio seeing the largest increase of 9.5 percent.

The 2020 rate increases continue a 2-decade AEWR march higher. Since 2000, the AEWR has increased from a nominal wage of $7.21 (straight average) to $12.96. This 80 percent growth in the AEWR has doubled the pace of general price inflation as calculated by the Personal Consumption Expenditures (PCE) Index.

Many farmers who utilize the H-2A program grow the fresh fruits and vegetables that are vital to a healthy diet. Over the last five years the national average AEWR has increased by 17% while revenues for fruits and nuts have only increased 3%, and revenues for vegetables and melons have not increased at all. While American farmers are required to pay their H-2A employees more and more each year in addition to already receiving free housing and transportation, the U.S. continues to increase produce imports from Mexico, and Central and South America. The U.S. even has significant wage disparities compared to Canadian agricultural operations where farm workers are paid between $8.72 and $11.55 per hour for their work on fruit and vegetable farms, while in Mexico workers are paid a fraction of that amount. Comparatively, the national average for the 2020 H-2A AEWR is $13.99 per hour.

Furthermore, there are entire sectors of agriculture that cannot access the H-2A program due to its seasonal requirement. Thus, farmers who produce healthy foods year-round – such as dairy farmers or mushroom producers – have no method for hiring guest workers once they have exhausted domestic labor options. Regardless of whether their crop is seasonal or grown yearround, America’s farmers face the same labor crisis. They need access to a guest worker program that will allow them to build the workforce required to continue to feed, clothe and fuel America.

The AEWR is unfair discrimination against farmers who are trying to follow the rules and hire foreign workers legally…The AEWR is obviously designed to suppress hiring of foreign farm workers—which is why labor unions and left advocacy organizations argue that the AEWR should increase even more.

READ ALSO  Quick, cheap to make and loved by police – facial recognition apps are on the rise