Denmark’s #MeToo moment as women open up on harassment

In 2012, Maria Gudme went for drinks with colleagues from Denmark’s Social Democrats party, the repercussions of which are only now being felt.

In a Copenhagen bar, the junior official, then 23, found herself sitting next to Frank Jensen, the city’s powerful centre-left mayor. “He just out of the blue put his hand on my inner thigh. I just froze. I couldn’t do anything,” Ms Gudme told the Financial Times, adding she quickly reported the incident to her boss.

Nothing happened to Mr Jensen, who carried on as mayor for the rest of the decade. Until this week, when he was forced to resign over this and other such incidents as Denmark, belatedly, has its own #MeToo moment.

Three years ago, as the original #MeToo movement led women around the word to begin telling stories of the harassment they had endured, and powerful men in politics and culture faced a reckoning for their behaviour, Denmark largely resisted.

Danes have some of the most generous parental leave measures, cheap childcare and low pay disparities between male and females, leading Denmark to be ranked this year as the best country to be a woman. But despite its reputation for gender equality, Danes had some of the most sceptical attitudes towards #MeToo in the developed world, according to surveys. One showed that Danish women were happier to be wolf-whistled by a man than be called a feminist.

The abrupt change in public attitudes began last month when Sofie Linde, a popular television host, told an awards ceremony that as an 18-year-old starting out in the industry, a well-known celebrity — who she declined to name — told her to perform a sex act on him or else, “I’ll kill your career. I’ll destroy you.”

The effect was immediate: within days, hundreds of Danish women in politics, culture and academia came forward to say they had been sexually harassed in the past in a way that never happened in 2017. Ms Gudme said: “Sofie Linde’s speech definitely turned my shame into the courage I needed to act.”

It led to the resignation of Morten Ostergaard as head of the Social Liberal party after he admitted to several cases of sexual harassment. There has also been renewed pressure on Jeppe Kofod, the Danish foreign minister who was forced to quit the same role in 2008 after admitting having sex with a 15-year-old. Denmark’s age of consent is 15 and Mr Kofod, who returned as foreign minister last year, has said he deeply regretted his conduct.

Campaigners say the Scandinavian country is experiencing a long overdue shift. “This is just the first phase. This is the most important issue going on in Denmark,” said Camilla Soe, a member of the centre-right Liberal party who helped Ms Gudme collect hundreds of signatures from across Danish politics from women who said they had been sexually harassed.

In the past, she said, Danish media was not interested in what politicians did in their private lives. “What we see now is not a #MeToo wave, it’s a tsunami,” she said. In her own case, she tells how a former boss once said to her: “‘You should unbutton your shirt while you make coffee for me’.”

There has been some resistance to the movement, particularly from older politicians. Pernille Vermund, the female leader of the populist New Right party, argued on a TV debate that “unless arranged marriages are the way forward, physical flirting is a prerequisite for the survival of the species”.

Inger Stojberg, the female deputy leader of Ms Soe’s Liberals, wrote on Facebook that the #MeToo talk had gone too far and that all men were being portrayed as “sex hungry and abusive monsters”.

Instead, it is the younger generation leading the charge. The 31-year-od Ms Gudme, a parliamentary candidate for the Social Democrats last year, said her generation was tired of being accused of being too sensitive. “My generation has been told: ‘you just have to man up’. We don’t want to do that any more, we just want to be the women we are,” she said. 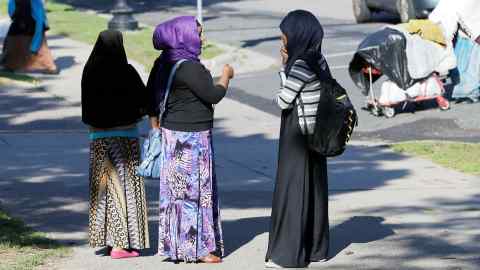 Rikke Andreassen, associate professor of communication studies at Roskilde University, made the point that “feminism” was still close to a dirty word in Denmark. Numerous Danish ministers for equality — left and right, male and female — have insisted they were not feminists.

“In a Danish context, saying you are a feminist very often gives you a negative label . . . Having one of the most beloved TV hosts speak out has really opened the door for other people to talk about feminism,” she said.

Ms Gudme said many Danes would consider a woman to be an “extremist” if she declares herself a feminist. Only one in five people in Denmark would label themselves a feminist, according to a YouGov survey, half the level of nearby Sweden.

Ms Andreassen admitted that researchers had never fully explained why Danes appeared to have different attitudes towards feminism even from their Nordic neighbours, despite having the same focus on gender equality.

She suggested one possibility was that the feminists of the 1970s had entered politics and parliament in Sweden but less so in Denmark, leading Danes sometimes to view the Swedish debate as “politically correct”.

Mr Jensen, the mayor, has apologised for his conduct and said he supported #MeToo but complained that it was difficult to defend himself against multiple allegations through the media.

For the young Danes, the campaign against sexual harassment will continue. They even devised their own hashtag to replace the US-inspired #MeToo: #EnBlandtOs, meaning “one among us”.

“It is never just one person’s problem,” said Ms Gudme. “It is all of us who have to act. This is a threat to democracy.”