Democrats Are Becoming Free Traders in the Age of Trump 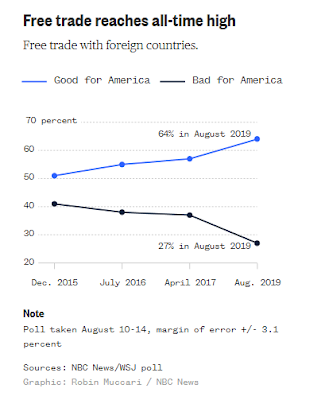 In a new poll from NBC News-The Wall Street Journal, 64 percent of Americans — including majorities of Democrats and Republicans — agree with the statement that free trade is good for America, because it opens up new markets, and the country can’t avoid the fact of a global economy.

This isn’t the result of a new appreciation of free markets by Democrats.
It is more about Trump hate.

“If Donald Trump is for it and you’re a Democrat, you move in a very different direction,”  said Republican pollster Bill McInturff, who conducted this survey with the Democratic pollsters from Hart Research Associates, according to NBC News.

READ ALSO  The Very Odd Trade Deal Between the U.S. and China; What Do the Chinese Really Think About It?