Delta Air Lines: Get Ready For The Slog (NYSE:DAL)

It’s been a while since I last covered Delta (DAL), and following a review of the investment case post-2Q, I am remaining quite firmly on the sidelines. I do acknowledge the post-COVID rally, but going forward, the latest breakeven target (by year-end 2020) appears far too optimistic, in my view. For one, achieving the breakeven target is largely dependent on an increasingly uncertain demand outlook in light of the COVID resurgence and newly introduced travel restrictions. Further, DAL’s outsized exposure to structural business travel changes drives a rather unfavorable risk/reward, in my view. Simply put, I see little improvement to the DAL thesis and, thus, remain firmly on the sidelines.

In sum, DAL is hurting all around, with higher margin and more “sticky” ancillary revenue sources such as loyalty also hurting at -44% YoY. Clearly, 2Q trends aren’t representative of the longer-term outlook (DAL’s adjusted profit, for instance, featured an ~$2-3bn swing vis a vis GAAP numbers), but they do highlight the difficult operating environment DAL finds itself in. A notable tidbit on the call, for instance, was DAL’s no-show rates, which currently lie in the high-single-digit range (up from the historical ~3%), making it challenging for DAL to “revenue manage.”

The cost side was a lot more interesting, in my view, and on this front, DAL is trending well. Management has reduced its adjusted operating costs by ~53% YoY to $5.5 billion (mainly capacity and revenue-related) and is targeting another 50% YoY reduction for the upcoming quarter. On an unadjusted basis, operating expenses stood at ~$6.3bn, though this includes an ~$1.3bn impact from the CARES Act grant.

On balance, this likely won’t be the full extent of the cost out, given ongoing CARES act restrictions. While DAL’s ability to properly align costs with post-COVID demand realities is limited for now, I expect the cost trajectory to steepen further heading into year-end.

Not a Lot of Positives From the Guidance; Breakeven Target is Optimistic

The September quarter guide points toward some incremental improvement, but any recovery looks to be very gradual. Revenue is expected to decline 75-80% YoY (vs. -88% in 2Q), though the guided ~50% decline in expenses should help. Note that though the cost declines are largely in-line with 2Q, capacity is higher at down 75-80% (vs. -85% in 2Q), which looks good. Like Southwest (LUV), the load factor will also be capped at 60% (i.e., middle seats blocked) through September, which means the available seat miles (NYSEMKT:ASM) growth DAL reports will naturally be higher through 3Q20.

In any case, management is calling for ~20- 25% of normal volume as the base case for the summer, which is far from ideal. Per management, DAL is taking the industry’s “most conservative approach” to capacity growth. This makes sense, in my view, given DAL had 700 aircraft parked at the end of 2Q (vs. the original 650), further highlighting the slower pace of the post-COVID recovery. The higher parked aircraft should drive maintenance costs lower in 3Q as well – maintenance is already down 90% in the June quarter vs. the company’s prior target of 80%.

Last but not least, DAL’s is targeting to breakeven on its daily cash burn by year-end, which seems aspirational at best – the achievement of the target is based on a lofty ~$25m/day improvement in revenue. Granted, some of that will come from refunds, but given 60% of DAL’s air traffic liability-obligated cash consists of travel credits, this would imply a ~$2bn ceiling on refunds. As management affirmed on the call, the contributor to the remaining ~$20m/day is volume-dependent and thus, largely out of management’s control.

So, one, the refund activity will continue to wind down. That will be a contributor in that. That’s probably in the plus or minus $5 million a day improvement by the time we get to the end of the year, which leaves about $20 million of cash, sales improvement, and that’s – you think of a company our size, that’s about a 20% improvement in our overall business volume that will get us there. So, we’ll probably need to see that $25 million come from the commercial side of the business, but that’s the roadmap to get to breakeven. – 2Q20 Transcript

Exposure to Business Travel is a Key Disadvantage

Though TSA data has pointed toward a notable uptick in passenger numbers, not all airlines will benefit proportionately. Given the passenger volume recovery has been driven almost exclusively by domestic leisure and travel, the outlook for airlines like DAL, with greater exposure to business traffic, remains bleak. 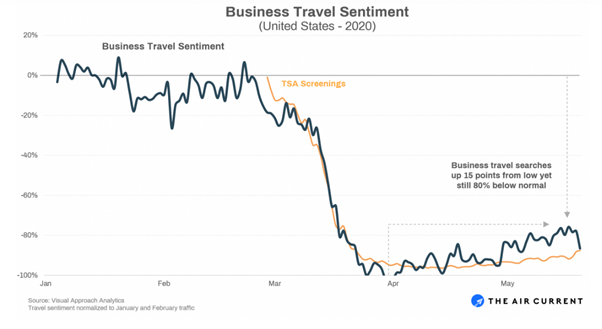 DAL’s 2Q commentary was similarly bearish on corporate travel – management believes business demand will eventually return, but some of it may be replaced by alternative solutions (e.g., video conferencing). Accordingly, DAL’s guidance for a business travel recovery calls for a 12 – 18-month lag, which is particularly bearish for DAL given it generates ~50% of its revenue from business travel.

Per management, Delta is currently burning ~$27m/day of cash ($17m domestic and $10m international), encouraging progress from the ~$50m/day in May $43m/day average for 2Q20. Relative to the $15.7bn of end-2Q liquidity (including the CARES Act’s PSP aid), DAL appears well-positioned at ~19 months of liquidity at the current cash burn rate.

There could be some risk to the cash burn trajectory, however, given DAL expects the daily cash burn rate to remain constant through July despite the virus resurgence and capacity growth. Further, DAL’s base case for an > 2-year recovery timeline could also prove optimistic given its exposure to business travel.

A Long and Slow Recovery

As things stand, the road back for the airline industry looks set to be a slog, particularly for business travel. Though DAL equity seems cheap relative to forward sell-side numbers, I would contend that estimates out to FY21 seem far too optimistic on a recovery. Similarly, management’s cash burn target seems aspirational rather than realistic, and I would be hesitant about underwriting the targeted improvements.

DAL is a high-quality airline, no doubt, but the challenges ahead are unprecedented, and in DAL’s case, likely structural. Not only is the company exposed to business travel risks (which could entail a writedown on decades of investments), but industry-wide capacity growth relative to a slow recovery in US passenger volumes drives incremental risk to the cash burn. Net-net, I would hold off on DAL equity.