Deciphering The Moves Behind Big Tech On U.S. Equity Markets

Subdued iPhone sales and diminishing revenues out of China were central features of Apple’s quarterly earnings. The firm reported quarterly revenues of $64.7B, 59% of which was powered by international sales. Product revenues remain comparably restrained at $50.149B while service revenues gathered momentum as the company moves closer towards a subscription-based service. The major standout in Apple’s filings was a substantive decrease in sales in China – with the rest of the world making up the difference to keep revenues on par with filings made the same time one year ago.

iPhone sales remain down 20% in comparison to the same time last year. New product launches throw some degree of light on the decrease, with consumers holding out anticipating new innovative products. More problematic, however, is the 28% drop in revenues from China.

This drop remains material as China’s economy is the first to show green shoots of recovery from the global health pandemic. Political headwinds between the United States and China continue to be a factor for future revenue outlook. Accordingly, Tim Cook shunned providing future guidance, for a third time consecutively, citing SARS-Cov-2. Price action for Apple continues to be strained post earnings dropping 4.5% after hours.

Earnings moves for the Cupertino tech proponent have primarily been reassuring, with a median shift of +2.3% to the upside 73% of past observations. Price action has customarily tended to be steady post earnings, with more positive moves than negative ones. The most striking negative price action occurred on earnings unveiled July 30, 2019, with a 3.6% upside move followed by 2 weeks of enduring downwards momentum. If historical price action provides reliable guidance, I would expect Apple to be at the same level or marginally higher over the next 2 weeks.

For traders contemplating setting stops, the biggest negative change for the stock during the period was -9.3% and the biggest positive one was +4.3%. Skew to the downside exists, which needs factoring in, particularly in the context of a volatile presidential election and growing anguish over the Novel Coronavirus pandemic.

Scrutinizing Apple data over the past 12 years, balanced observations swinging between negative and positive moves can be remarked. The global securities sell-off of Q4 2018 has distorted data marginally. This is an invaluable consideration given the current macroeconomic climate as an indicator of where stocks could possibly go towards the back-end of the year.

Amazon perseveres with its dominance of the global digital marketplace. This earnings announcement was marked by revenues coming in at $96B for the 3 months ended September 30. This translates into 37% growth on a quarterly basis. For the year to date, total proceeds have been resiliently totaling $260B over the past three quarters. This is a 34% increment in sales of $193B delivered the same time last year.

Operating cash flow continued its ascent topping out at $55B during the same period. Highlights have included efforts in bettering employee benefits, increasing jobs in local communities, addressing environmental initiatives, and continuing to strengthen the business. 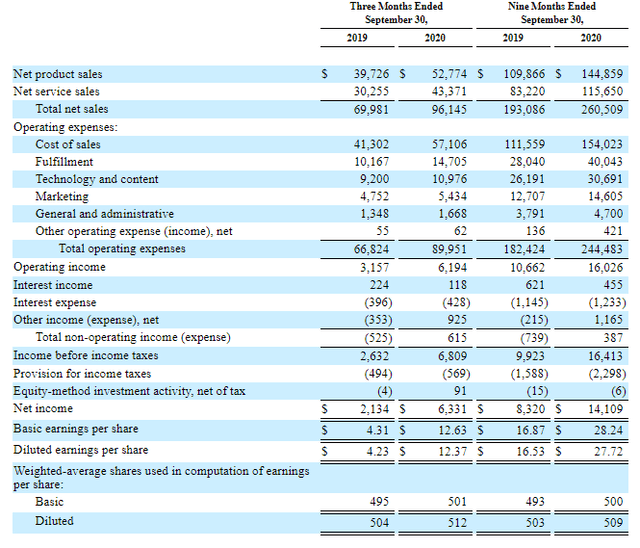 Product and sales lines continue to grow across the board with headline growth (43%) coming from service lines. The preeminence of Amazon Web Services, digital storage, and cloud-based computing remains a growth engine for the company. Efforts to improve employee well-being will gradually reverberate in different cost buckets as fulfillment expenses related to warehouse infrastructure, human capital costs, and logistics expenses climb at a higher rate than revenue streams (+44%).

Historical information organized for Amazon shows the balance between positive and negative moves to be evenly matched with slight bias to the downside. Over the past 11 quarters, the stock has delivered median returns of +0.5% while notably sinking thereafter. The 25 July 2019 quarter was markedly gloomy for Amazon with sustained downside action. This has comparatively affected data sets post earnings for the Seattle behemoth. One week after earnings, 73% of inputs were positive with an average return of -0.2%.

Despite that, median return for the same period was +0.5% emphasizing the importance of data outliers. Two weeks after earnings, Amazon stock was historically on the upside 64% percent of the time, with a median return of +1.4%. For investors contemplating an entry, during this period, the biggest historical gain for the stock was +6.3% and the largest loss was -7.0%.

Price returns for Amazon were markedly distinct to those of Apple over the same period. The company appeared more resilient to the large negative pullback witnessed in the last quarter of 2018. This is reflected more strikingly in data sets with Amazon historically performing well over the November month.

Note the impact of the Great Financial Crisis as being broadly more pronounced for Amazon than Apple. This may be pointed out by Amazon’s leanings at the time towards a more US-centric consumer-based model in comparison to Apple’s more extensive international revenue streams.

We had a strong quarter consistent with the broader online environment. It is a testament to the deep investments we’ve made in AI and other technologies, to deliver services that people turn to for help, in moments big and small

Total quarterly revenues topped $46B, a 14% increase over quarter ended 30 September 2019. Operating income printed in at $11.2B. Broad-based strength was recognized across multiple advertising segments with an observable increase (+32%) in revenues generated by YouTube. Google Cloud was another growth engine registering a 44% increase in revenues on a quarter on quarter basis.

The company continues to maintain a growing cash balance, presently sitting on a deployable war chest of $132B. This will provide flexibility for growth initiatives the company may wish to pursue.

Earnings moves for Google have been passably more evident than its tech peers, with comparably large fluctuations to the upside or downside. On earnings announcements, the stock has traditionally had a negative move 58% of the time with a positive average return of +.01% which implies more distinct swings to the upside. Removing outliers by analyzing median numbers provide us better information with returns being -2.2% on the announcement.

Google has faded comprehensively post earnings, with multiple dates presenting a clear sequence of selling off. The 3 days proceeding earnings saw considerable sell offs with negative observations 75% of the time two days after earnings for a median return of -1.4%. Similarly, three days later, – 58% of observations were negative with a median move of -0.4%. It appears the decline becomes more muted after a few days with swings in the stock price ranging between +5.0% on the topside and -5.7% on the bottom-side two weeks after the event.

Price returns for Google Inc. remained pitched to the upside over the same period with more concrete up moves. Like Amazon, the company suffered little from the large global sell-off in US securities in Q4 2018. Returns during November have remained relatively firm with largest negative moves being less than swings to the upside. This is not the case for both Amazon and Apple which experienced larger negative swings during the same period.

Earnings season for the tech titans is not only paramount in understanding the financial health of the individual companies but provides more detailed insight into directional moves of US securities markets holistically. With the much-followed FANG (Facebook, Amazon, Netflix, and Google) stocks making up a meaningful representation of the entire market capitalization of both the S&P 500 and Nasdaq indices. Any negative moves translate into direct impact on the indexes. This provides us with a good approximation not only of price movement post earnings for these behemoths, but potential clues as to how stock indices will perform in November.

While history seldom repeats itself, it does in many ways rhyme. This provides more in-depth insights into how equity markets may behave going into a very volatile November month. Notably, each stock delivered negative returns during the last US presidential elections in 2016.

It is highly likely that the presidential race produces similar results for Apple, Google and Amazon this year as volatility increases, sentiment becomes increasingly uncertain and the backdrop of a global health pandemic dampens investor outlook.

While my overview for the 3 stocks remains neutral at current price levels, the impact of their moves on US equity markets will most likely be pronounced and to the downside during the month of November taking into account current momentum and price action in 2016.