It’s been an exciting year for the gold juniors (GDXJ), as renewed interest in the sector has bolstered company balance sheets, kicking off the most aggressive drilling programs in nearly a decade. While many companies haven’t hit anything worth writing home about, De Grey Mining (OTC:DGMLF) is an exception, with the company making discovery after discovery on its Mallina Gold Project [MGP]. The addition of several new zones will likely lead to a 150% increase in gold resources to the world-class 5-million ounce mark. However, at a current market cap of nearly US$1.4 billion, the valuation is getting a little stretched here. Therefore, while I see De Grey as a likely takeover target, I would not be chasing the stock at current levels. 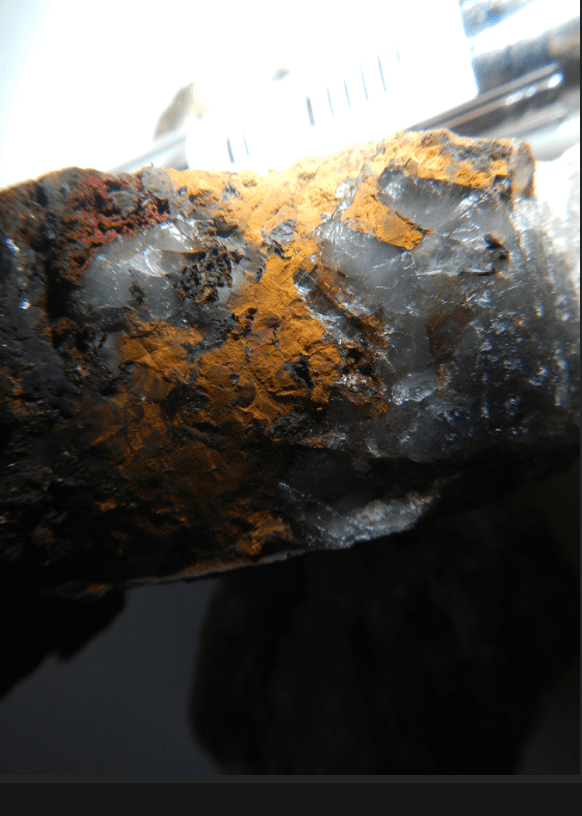 The Gold Juniors Index has been stuck in a funk since August due to weaker gold prices, but De Grey Mining hasn’t got the memo. The stock is up over 50% since August 1st, and 30% in September alone on the back of exceptional drill intercepts from the company’s gold project in Western Australia. It is becoming clear that this is a massive gold system with the Hemi discovery having a strike length of nearly 2 kilometers, with the deposit drilled down to a depth of more than 250 meters. It’s also worth noting that the Hemi discovery with three zones defined to date (Aquila, Crow, Brolga) is entirely separate from the current 2.2 million-ounce MGP resource.

While there are a handful of deposits owned by gold juniors globally with the above-noted dimensions, few have grades that resemble Hemi, with the most recent highlight intercept (HERC-238) coming in at 64 meters of 13.4 grams per tonne gold. This is one of the best intercepts drilled this year in the sector, which confirms that Hemi is not only higher grade than the current Mallina resource (2.2 million ounces of gold), but it’s also capable of producing thick intercepts. Based on the recent drilling and increased mineralized footprint, Hemi is looking like a 3-million ounce discovery on its own. 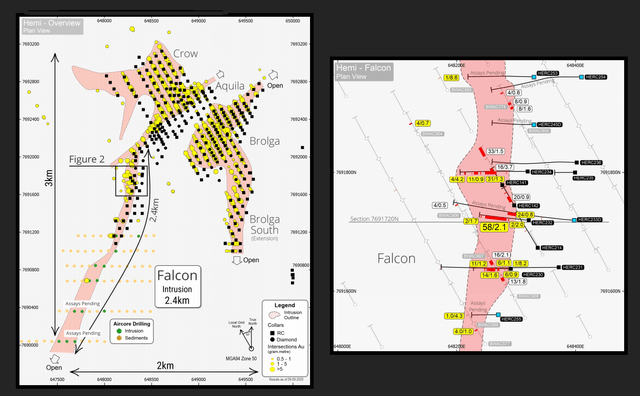 The most recent news is that De Grey has discovered a 4th zone earlier this month that lies south of Aquila, which the company is calling the Falcon zone. The new Falcon prospect’s initial drill results are quite encouraging, with a highlight intercept intersecting 58 meters of 2.1 grams per tonne gold. Based on preliminary drilling, the company estimates that the Falcon intrusion is 1.8 kilometers long, with a thickness of up to 80 meters. We can take a look at the other drill holes intercepted at Falcon below:

READ ALSO  AbbVie: Now It's Time To Dollar-Cost-Average On This 5.6% Yield (NYSE:ABBV)

While not all of these above intercepts are above the current resource grade at MGP, they are quite impressive, given that these are scout drilling holes. Thus far, it looks like the average grade at Falcon is likely to come in at above 1.2 grams per tonne gold, which is a little lower grade than other zones at Hemi. However, this is still well above the average open-pit grade of 1.0 gram per tonne gold across open-pit deposits globally, and adding ounces should dramatically improve the economics at Hemi. This is because all of these deposits are within close proximity of each other and relatively near-surface, which should increase the mine life and allow the project to benefit from economies of scale. 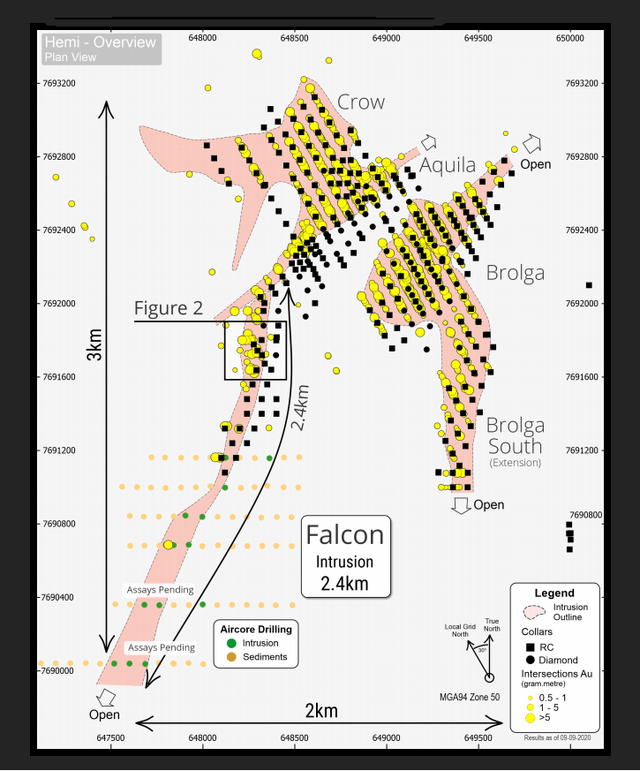 If we take a bird’s eye view of Hemi above, we can see that the Falcon intrusion has increased the strike length at Hemi to above 2.5 kilometers, and mineralization occurs across a 2-kilometer distance east to west, with up to 250-meter depths. Using these dimensions and assuming a conservative grade of 1.40 grams per tonne gold, we are looking at a deposit that should easily come in above 3.0 million ounces of gold. I would argue there’s even 4.0 million ounce potential here. If we add this to the current 2.2 million ounce resource scattered across the Mallina Gold Project, we have a world-class project on our hands. I have increased my Q1 2022 gold resource target to 5.9 million ounces, up from 4.7 million ounces based on this recent drilling and new zones that have been delineated. 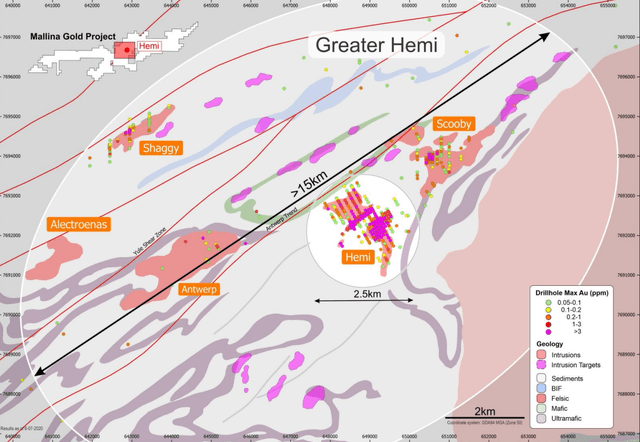 Moving to a bigger picture view, the resource that’s being delineated at Hemi is in just a small portion of the 15-kilometer strike at ‘Greater Hemi,’ with other targets like Shaggy, Antwerp, and Scooby receiving only preliminary drilling to date. It’s far too early to guess how much might be proved up at these new zones as the focus is on Central Hemi (Falcon, Crow, Brolga, Aquila), but this certainly offers exploration upside. Given that the company has over US$80 million in cash after their recent financing, they should have no problem aggressively drilling out this area over the next 18 months.

Finally, if we take a big picture view of the whole project, De Grey is one of the only companies in the sector that’s locked up a 100 kilometer plus strike length, with the MGP being made up of 1,200 square kilometers of tenements. Once again, it would be pure speculation to assume that the company will make multiple discoveries on this complete land package. Still, I would argue that De Grey Mining is one of the few companies in the sector with 10-million ounce potential given that it has likely uncovered over 5 million ounces on just a small portion of its massive land package. This justifies a large premium for ounces in the event of a takeover.

READ ALSO  CIO: "US And China Are Engaged In Full-Blown Financial War... And China Will Fake Prosperity & Growth To Attract Foreign Capital" 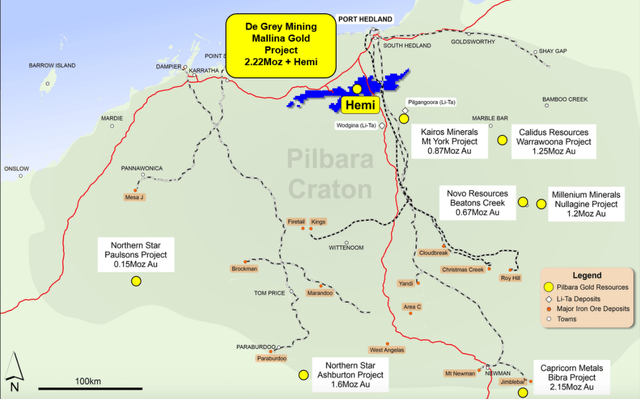 Fortunately, not only is Mallina an incredible project, but it also benefits from exceptional infrastructure. The project has a gas pipeline 5 kilometers away, a 220,000V electricity transmission line 20 kilometers away, and the project sits just 45 minutes (60 kilometers) south of Port Hedland. Therefore, whether a suitor swoops in to buy De Grey Mining or the company builds this mine themselves, the upfront capex should be relatively modest due to the benefit of extensive infrastructure. Based on my estimates of where the resource stands currently, and the long-term potential, this could easily be a 250,000-ounce per year project in terms of gold production.

So, why not pay up for the stock here?

Unfortunately, while De Grey has a resource of 2.2~ million ounces that’s set to grow over 150% based on my estimates, the valuation is getting quite frothy even if we assume that 5.9 million ounces are proven up here. As we can see below, the company has 1,257 million shares outstanding and a share price of US$1.09, and this translates to a market cap of $1.37 billion. This valuation is more than what several gold producers are trading for currently. If we subtract out the company’s US$88~ million in cash, we come up with an enterprise value of $1.28~ billion, which is still quite lofty for an explorer, regardless of how impressive their resource is. 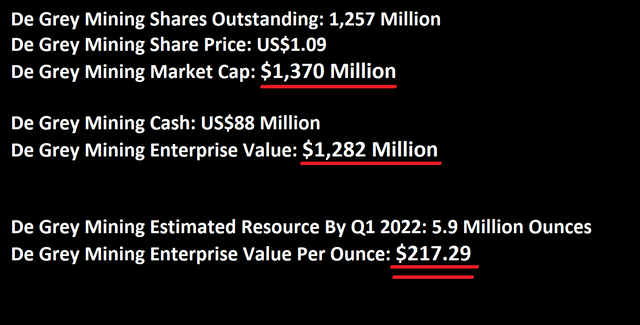 If we assume that De Grey proves up 5.9 million ounces of gold across its Mallina Gold Project by Q1 2022 and we value it this way, we still have an explorer currently trading at a valuation of US$217.29/oz. This is more than double the 4-period moving average for the price paid per ounce in the gold sector presently of $90.74/oz. I would argue that De Grey deserves a 60% premium to this 4-period moving average because this is a Tier-1 jurisdiction project that’s sitting next to infrastructure, and it is one of only about ten projects worldwide with 10 million ounce potential. However, even if we adjust for a 60% premium, which would translate to a fair value on ounces of US$145.18/oz, De Grey is trading more than 50% above this level. As the chart below shows, the valuation is off the charts. Therefore, buying at current levels carries elevated risk as there’s zero safety margin baked in here.

Unfortunately, for De Grey investors, the technical picture corroborates this view. As the chart shows, De Grey Mining is trading more than 50% above its 200-day moving average (yellow line). This level of an extension has given the stock trouble in the past, with the recent signal leading to a 35% correction. While there’s no guarantee that this time plays out similarly, there is a heightened risk for those considering adding exposure at current levels. 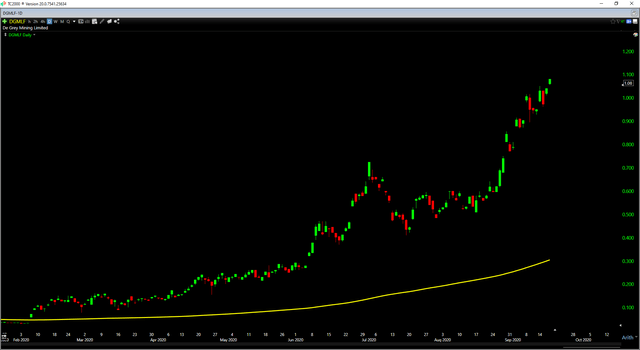 While De Grey Mining is arguably the most impressive discovery in the past year in the sector, and one of few juniors capable of proving up 10 million ounces by 2025, I see very little value at US$1.10. Based on an enterprise value per ounce of above US$215.00, the company is trading for more than double the average paid for previous takeover targets, and 50% above where I believe fair value is ($145.00~/oz). Therefore, while the drill results to date and incredible exploration success are mesmerizing, I do not believe investors should be lured into chasing the stock above US$1.10, where there’s zero margin of safety.