DBS Group: The Worst Is Most Likely Over (OTCMKTS:DBSDY)

Asia’s economies might recover faster than that of Europe and the U.S., judging from the second wave of coronavirus, which is now hitting the western world.

However, the world is interconnected, with greater interdependence now than we have ever seen. The manufacturing sector is humming away quite well, but it is the service sector that is feeling the brunt of the pandemic. Many Asian nations do rely on visitors, whether they are coming for business or leisure.

It is still not clear what the impact will be on thousands of companies. So far, governments have offered help, but is it too little and too late, or is it enough to keep most people employed and the cash registers humming?

DBS Group Holdings (OTCPK:DBSDY), with its main businesses in Singapore and Hong Kong, is also reliant on this development.

It is time to check under the hood, to see how they are doing.

There has been a turnaround in the bank’s net profit from the 2nd to 3rd quarter. They registered an increase of 4% in the third quarter to SGD 1,297 million.

In my last update on HSBC (NYSE:HSBC), I pointed out the squeeze that banks are experiencing on their net interest rate margins. DBS is no different.

Based on the assumption that this low-interest rate environment is going to stay with us for the foreseeable future, and the intense competition there is on constantly renewing the bank’s loan book, it is unlikely that interest rate margin will improve much over the next couple of years.

In view of this, the bank is focusing on making some adjustments to their business model.

More income will come from fees. Hence, their fee income was up as much as 17% in the last quarter.

Fee incomes, from credit cards, services the bank is rendering, and so forth, will become increasingly more important. To illustrate this, we just made a lumpsum payment on an industrial property loan with DBS this month, and the bank charged us the equivalent of USD335 in fee to handle this. Last time we made such an unscheduled lumpsum payment, they waived the fee. Not this time around.

However, we do need to keep things in context. Although the margin is compressing, the interest income is still very important as it constituted as much as SGD 2,171 million to the profit. If we look at fee income, this was SGD 913 million.

Now, let us look at risks associated with lending and giving other forms of credit.

It is this risk of an increase to nonperforming assets (NPAs) which we need to keep a close eye on. 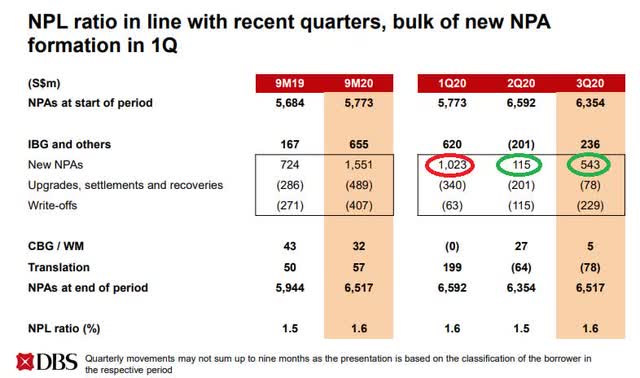 There was a slight increase of 3% in the NPA Quarter over Quarter, but nothing alarming. However, it is worth mentioning that new NPAs are expected to increase once government relief programs expire early next year. During the pandemic, the government mandated that the banks gave lenders a moratorium on payments on their loans. DBS’s exposure to this increased to SGD 13.5 billion from SGD 12.6 billion in the corporate sector. On the consumer side of their lending, it remained unchanged at SGD 5.7 million. This is mostly mortgages of owner-occupied Singapore housing loans with a loan to value below the regulatory threshold of 75%

That is why prudence is critical. In order to shore up capital against these potential non-performing assets, the bank has made General and Specific Provision Reserves recorded as an expense on their income statement and a corresponding liability in their balance sheet. 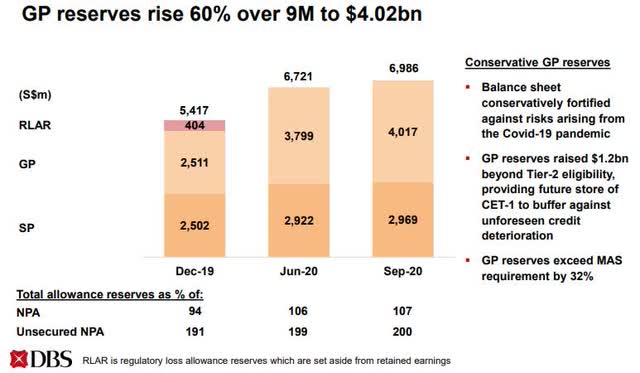 The total reserve now stands at SGD 6.99 billion, which is well in line with their estimated nonperforming asset.

The actual losses as a percentage of the estimated losses vary from bank to bank. It is a result of how aggressive or conservative the bank decides to be when they give their clients credit.

It is important to understand how this works. If a loan has not been serviced in 90 days, it needs to go into the new NPA bracket. The entire loan balance becomes a theoretical liability. However, the probability of the bank losing the entire amount is very small.

The dividend remained at Singapore 18 cents per share for the 3rd Quarter. This translates to a yield of just 2.9% based on the present share price of SGD 24.63.

What that tells me is that the market believes the dividend most likely will be reinstated fairly soon to its pre-COVID-19 level of Singapore 33 cents, bringing the yield up to 5.5%.

The reduced dividend payment has fortunately improved net book value by nearly one dollar from SGD 18.96 in Q3 of last year to SGD 19.94

On 15th November, 15 Asian Pacific nations got together and signed the largest free trade agreement in the world. 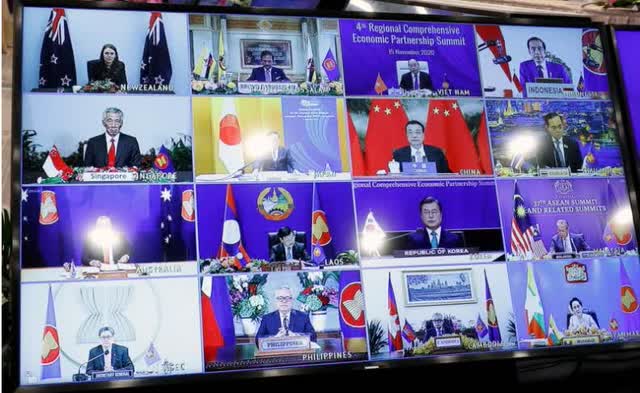 It is called the Regional Comprehensive Economic Partnership and replaces the Trans-Pacific Partnership which the U.S. and the Indian administration walked away from four years ago. With the U.S. out of TPP, it basically left the Asian countries to make their own new free trade agreement.

It may not have attracted much attention, but this deal could reshape a significant part of the global trade over the coming years. In terms of GDP, the participated countries consist of one-third (around 32%) of world GDP, while the affected population reaches close to 2.2 billion people. It accounts for around 27% of global trade in goods and commercial services.

Professor Michael Plummer of Johns Hopkins University has estimated that the RCEP will result in increased trade of over $400 billion in the decade following its enactment.

It remains to be seen if this agreement will lead to an established trading zone in the region similar to the one in the EU, as the agreement is intended to lower tariffs amongst participating nations, limit barriers for the service sector and investments, as well as shape common trade rules and customs administration.

However, we should not expect major effects immediately on tariffs as some are even meant to be reduced over a 20-year period.

Perhaps the most important part of this deal is the fact that China, South Korea, and Japan intend to work closer on the issue of trade. That, in itself, should be considered a milestone.

The beneficiary of increased Intra Asia trade will certainly be financial institutions that are focused on trade amongst these nations. HSBC comes to mind, but DBS with its presence in Singapore which is a hub for southeast Asia, and Hong Kong serving China, will also benefit from added trade activity.

From the numbers delivered by DBS in the third quarter, we can see that the impact from the pandemic is well contained. The bank is still very profitable.

Nevertheless, to be on the safe side, provisions are made to deal with potential non-performing assets, as the fallout from some of this may come only next year.

It is expected that the economies in Singapore and Hong Kong will gradually improve. An important part of this will be opening up to visitors. Both of these two countries do rely on visitors. Unless we see a further resurgence of the pandemic in Asia or deterioration of the global economy, it is likely that some of these reserves they are building up now will be reversed.

This will also be accompanied by a gradual return to the dividend pre-covid19 level. Exactly when this will take place is hard to predict, but my guess would be by the middle of next year.

The share price of DBS has gone up in line with the general market. But it is still good value at the present level.

I remain bullish on DBS.

Disclosure: I am/we are long DBSDY, HSBC. I wrote this article myself, and it expresses my own opinions. I am not receiving compensation for it (other than from Seeking Alpha). I have no business relationship with any company whose stock is mentioned in this article.