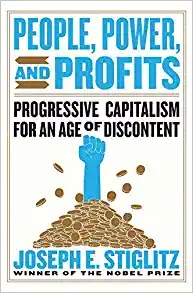 The Mises Institute terminator, David Gordon, has focused his encyclopedic knowledge and powerful analytic ability on the new Joseph Stiglitz book,  People, Power, and Profits: Progressive Capitalism for an Age of Discontent.

Stiglitz never had a chance.

Gordon warms up his review by pointing out a Stiglitz “forgivable slip” in the book:

Stiglitz does spoil things a little when he says…that “the real politik of the twenty-first century” is that those who seek to  preserve  the  “values  I  articulate”  will  have  to  persuade  others to follow the policies he suggests. Since realpolitik (one word, not two)  means  politics  based  on  interests  rather  than  ideology,  this  is  confusing.  It  seems  a  forgivable  slip,  though,  given  Stiglitz’s  seeming endorsement of a distinction basic to libertarian thought.

Then he gets to the heart of Stiglitz model building and a contradiction:

If we persist and ask why Stiglitz is so convinced of the need
for a strong government hand in the economy, we confront a
paradox. Stiglitz is best known as an economist for his work on the
limitations of the neoclassical model of competitive equilibrium.
Concerning the model, he says, “It is not robust—slight changes in
assumptions… lead to large changes in results….” (p. 280, note 1) Yet
he judges the free market inadequate because it fails to conform to
the requirements of this model.

And then Gordon takes out his knife (my bold):

Sometimes, Stiglitz’s bias is comical in its intensity. Thus, he
mocks those in the Reagan era who said that “firms should pursue
their shareholder interest,” not aim at social responsibility. (p. 112)
He tells us that “Milton Friedman the high priest of the Chicago
School… was asserting these positions.” (pp. 314–15, note 22). Yet
later on, he says,

There is no individual abridgment of rights when we restrict corporate
contributions [to political campaigns] indeed, one might argue the
reverse, I buy a stock on the basis of my judgment of the corporation’s
economic prospects. It weakens the economy to have to conflate those
judgments with whether I agree with the CEO’s political judgments.
(pp. 169–70)

He excoriates President Trump for his attacks on the judiciary:

“[T]aking a page from the playbook of despots everywhere… he attacked
the courts themselves, undermining confidence in the judiciary and
its role as a fair arbiter….” (p. 165).

Immediately after saying this,Stiglitz attacks judges appointed by Republicans for their partisan decisions and for “the appointment of a grossly unqualified judge,Clarence Thomas.” (p. 165). It is wrong to impugn the integrity of the Court—except, of course, when I do it.

And the final blow with a little help from Schumpeter:

Stiglitz perfectly illustrates a famous remark by Joseph
Schumpeter: “Capitalism stands its trial before judges who have
the sentence of death in their pockets. They are going to pass it,
whatever the defense they may hear; the only success victorious
defense can possibly produce is a change in the indictment.”