As a result of the pandemic demand contraction and March oil price war, ConocoPhillips (COP) is coming off a second quarter in which it curtailed production by over 25%, much of it in the Lower 48.

Cautious optimism about increasing demand and stabilizing oil price, offset somewhat by new waves of Covid-19 infection, have led ConocoPhillips, a $41.2 billion market-cap company, to plan on restoring its curtailed production. The ruling from Washington, D.C. District Court Judge James Boasberg to shut down the 570,000-BPD (barrel per day) Dakota Access Pipeline could throw a wrench into ConocoPhillips’ plans and those of other Bakken North Dakota oil producers; still, ConocoPhillips is better situated than many of its regional competitors.

Given its reduced budget, second quarter curtailments, balance of U.S. and worldwide operations, moderate dividend of 4.4%, and price at the low end of its 52-week range, ConocoPhillips is a worthwhile stock for long-term energy investors.

With the pandemic demand contraction and the oil price war, U.S. producers cut domestic oil volumes from 13.1 million barrels per day (MMBPD) in February 2020 to 11.0 MMBPD in July 2020.

The price war was resolved when Russia and Saudi Arabia and the rest of OPEC (and implicitly, U.S. companies) agreed to reduce supply to better meet the reduced demand.

Oil demand in the U.S. and abroad has begun recovering.

Four recent events have caused companies and investors to consider midstream regulatory logjams more closely. The first is the judicial decision to shut down and drain the 570,000 BPD Dakota Access Pipeline (DAPL), which brings North Dakota Bakken crude to the U.S. Gulf Coast. The second was the vacating of – at first apparently for all pipelines, then clarified only for Keystone XL – the Nationwide Permit 12 which allows dredging for pipelines across water bodies. This and other regulatory delays led to, third, Dominion (D) and Duke (DUK) to abandon their Atlantic Coast natural gas pipeline and fourth, Dominion to sell its midstream assets to Berkshire Hathaway (BRK.A) (NYSE:BRK.B).

A Washington D.C. judge-ordered closure by August 5 (despite his previous approval in October 2017 of the pipeline’s continued operation) of the Dakota Access Pipeline will shut in this vital Bakken pipeline that has operated since 2017. Judge Boasberg denied an initial appeal of his decision. The appeal next goes to the D.C. Circuit. If it fails there, it could be appealed to the U.S. Supreme Court.

Energy Transfer (ET), the pipeline’s operator, and others have cited the technical impossibility and safety considerations of shutting down and draining the large pipeline so quickly.

Bakken crude production was down from its high of 1.46 MMBPD to 1.0 MMPBD, still, there is insufficient other takeaway capacity to readily compensate for the loss of DAPL. Should Bakken oil revert further to rail transport, the traffic increase will hurt farmers but help railroad companies.

However, investors should note there are many safety (fewer spills and fires), environmental, and economic reasons to prefer continued operation of the Dakota Access Pipeline. 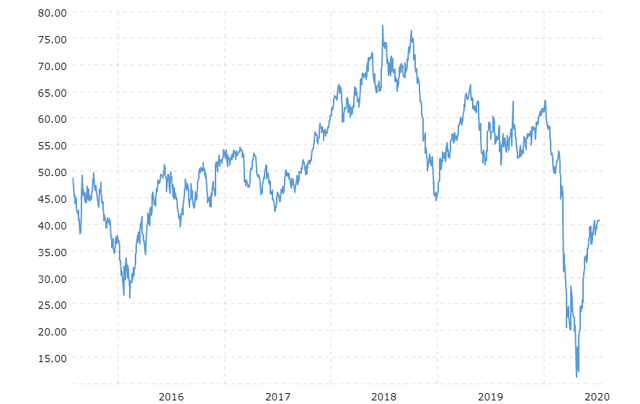 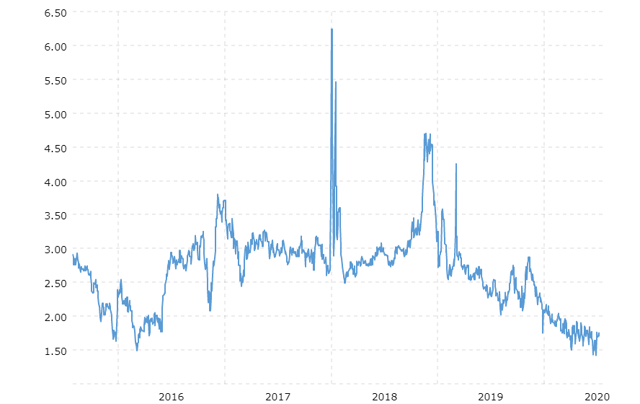 Shutdowns resulting from the Covid-19 pandemic reduced world oil demand by as much as 30% (30 MMBPD) in April; demand is now estimated to have recovered to 85-90 MMBPD. Natural gas saw a slight uptick with smaller volumes of oil-associated gas in the U.S.; however, natural gas remains oversupplied, especially in view of reduced LNG loadings and pandemic-decreased electricity and industrial demand.

It is worth noting that, as seriously negative as a DAPL shutdown would be in a state that gets half its revenues from oil production, for ConocoPhillips, in the very unlikely event that all DAPL volumes of 570,000 BPD were shut in, this might have the effect of raising global crude prices and U.S. natural gas prices (due to less associated gas).

ConocoPhillips explores for and produces oil, natural gas, and natural gas liquids in six geographic regions: Alaska, Lower 48, Canada, Europe and North Africa, Asia Pacific/Middle East and other international. In the U.S. Lower 48, the company produces from several unconventional reserve basins with a “Big 3” emphasis on the Eagle Ford, Bakken, and growing operations in the Delaware sub-basin of the Permian. 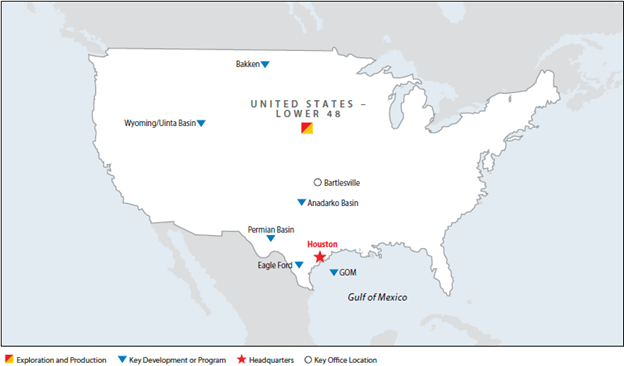 In the second quarter, 65% of the company’s curtailments, or 146,000 BOE/D was made in the Lower 48. While a basin-by-basin breakdown is not supplied, it would likely have been economic to curtail the less-valuable gas-heavy production of the Eagle Ford, followed by the Delaware, then the Bakken. In this scenario, second quarter Bakken production would have remained at 96,000 BOE/D (mostly oil). Another possibility is that COP cut back its Bakken production at the same percentage as the entire Bakken basin cuts of about a third, or to 64,000 BOE/D for COP.

The company had planned to lift curtailments in the third quarter but the DAPL order could lead to different decisions:

*if DAPL is allowed to continue to operate, COP could keep Bakken volumes at curtailed levels or increase them.

*if DAPL is shut down, COP could resume normal pre-curtailment production and use alternate (more expensive) transport.

*if DAPL is shut down, COP could keep Bakken curtailed and use alternate (more expensive) transport.

*if DAPL is shut down, COP could shift curtailment volumes to the Bakken up to what had been the full 96,000 BPD of production and focus activity on other basins.

Should the company be required to shut in its oilier Bakken production, the remaining Lower 48 production will be a more gas-heavy mix, especially Eagle Ford production.

At the end of 2019, ConocoPhillips had 5.26 billion BOEs of net proved reserves. Half of the total was crude oil, natural gas was 37%, natural gas liquids were 8%, and bitumen was 5%.

As of December 31, 2019, the SEC PV-10 discounted cash flow of ConocoPhillips’ proved oil and gas reserves was $34.5 billion, of which $27.4 billion was consolidated operations and $7.2 billion was Asia Pacific/Middle East equity affiliates. By regions, the biggest areas of consolidated operations were Alaska at $9.7 billion and Lower 48 at $10.0 billion. Asia Pacific/Middle East was $10.1 billion, most of which was due to equity affiliates. 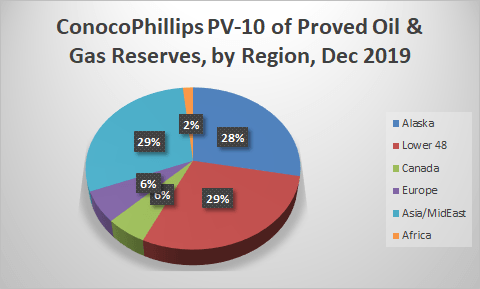 ConocoPhillips’ first quarter loss was -$1.7 billion or -$1.60/share compared to year-ago earnings of $1.8 billion. Cash from operations was $2.1 billion. Production was 1.29 million BOE/day. Even prior to pandemic effects, prices were lower than in the comparable 2019 first quarter:

Insiders own a negligible fraction of the stock. Effective June 15, 2020 stock shorted as a percentage of float was 1.1%.

ConocoPhillips’ beta is 1.69. This is considerably more volatile than the market for a large company, but the combined effect of the pandemic, oil price war, regulatory changes, and stuttering recovery have kept energy markets choppy.

READ ALSO  Inflation Will Be Cyclical, Not Secular: Boockvar

Book value per share at $29.20 is below the stock price, implying positive investor sentiment.

ConocoPhillips’ market capitalization is $42,400 per flowing BOE, which suggests good recognition of its oil assets.

ConocoPhillips is sensitive to global oil prices since half of its reserves and more than half of its revenues come from crude oil. Natural gas prices are the second key factor.

As noted above, U. S. midstream regulatory step changes, especially the potential DAPL shutdown – along with global risk in countries such as Libya – also adds significant uncertainty for the company.

I recommend ConocoPhillips for its careful worldwide and U.S. operations, good cash flow, and even its modest 4.4% dividend.

Risk-averse investors may want to wait for the second quarter earnings announcement at the end of July – which will include the effect of the company’s 25% volume curtailments. While the judicial outcome of the DAPL shutdown decision is a significant uncertainty, ConocoPhillips has enough global and U.S. basin diversity to make whatever operational pivots may be necessary. 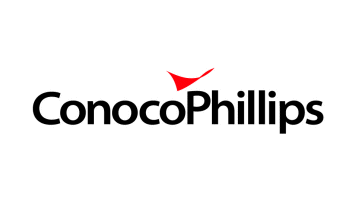 Disclosure: I am/we are long BP, D, EOG, WPX. I wrote this article myself, and it expresses my own opinions. I am not receiving compensation for it (other than from Seeking Alpha). I have no business relationship with any company whose stock is mentioned in this article.