Danaos: Well-Positioned For The Coming Year And Shares With More Room To Run (NYSE:DAC)

Danaos Corporation (DAC) reported earnings on November 5, delivering solid results amidst a resurgent charter market. Since lows earlier this year, shares have recovered and then some, nearly reaching $16 per share. On Tuesday of this week, shares dropped by up to 20% as a company exited a fifteen percent stake in the company. With still-rising charter rates and a growing fleet, coupled with debt reduction, Danaos remains an attractive investment even at these higher levels through 2021.

Danaos reported excellent earnings for the third quarter, with net income of $47.3 million representing an increase of 24.8% year over year from $37.9 million. The company’s operating revenue also grew, to $118.9 million from $111.8 million a year ago. All of this growth was driven by higher charter rates and a greater number of average ships chartered. The company also completed a $31.1 million share repurchase program which caused significant appreciation in the company’s shares and suggests management has confidence that the company will be able to sustain a higher level of earnings.

Looking forward, the company appears well-positioned, with four recent ship acquisitions: two 2009-built 6,520 teu and two 9,000 teu ships. The company expects delivery of the two 9,000 teu ships in January, which will have a positive impact on earnings for the full 2021 fiscal year. Combined with charter rates at a ten year high, Danaos is poised to see decent earnings growth over the next year. 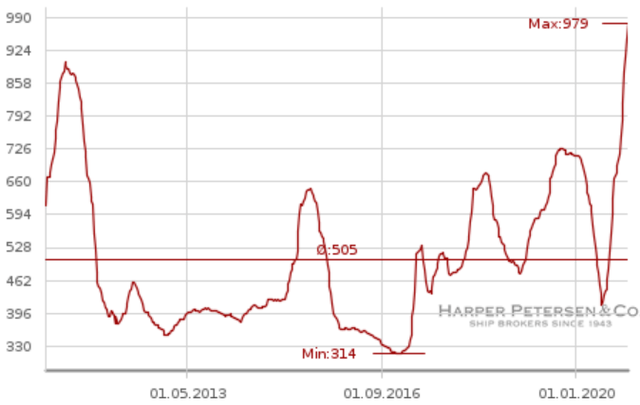 Given historically low newbuilding levels, and a demand that is expected to continue resurging through 2021, charter rates should hold this new-found higher level for the next couple of years. Even if we see a dip from this level, Danaos is still at a much better place than it has been at for many years and is hedged by long-term charters.

With most other figures remaining roughly the same for the period, a significant amount of the growth in their net income can be credited to a decreased debt load and interest expense.

Danaos’ outstanding debt, gross of deferred finance costs, declined from $1,591.4 million to $1,505.6 million year over year, representing an $85.8 million, or 5.7% decrease. This is equivalent to repaying roughly $21.45 million in debt per quarter. The company’s debt to equity ratio declined from 2.51, just over a year ago, to approximately 1.51 as of September 30. This brings Danaos roughly in line, though slightly above, its peers Diana Shipping (NYSE:DSX), Safe Bulkers (NYSE:SB), and Costamare (NYSE:CMRE). With the company stating that they won’t be pursuing further acquisitions for a while, their debt repayment should accelerate some, further helping their valuation potential and risk profile.

Danaos’ share price has increased dramatically from lows in March, though it dropped by 20% this past Tuesday. This selloff was driven by the sale of a 15% stake in the company by Cerberus Capital Management. This has brought share values down to around $12. The company’s EV/EBITDA based on their trailing twelve months adjusted EBITDA is at 5.26.

Trailing adjusted EBITDA is $313.4 million. The most recent quarter‘s adjusted EBITDA of $83.3 million following the previous quarter‘s adjusted EBITDA of $80.1 million, representing 5 and 6% growth respectively, show the company’s improvement following growing charter rates. With its current trajectory in an environment of growing rates, and expecting the delivery of two 9,000 teu ships in January, Danaos should be able to see an EBITDA of $333 million for fiscal year 2021, representing third-quarter EBITDA annualized and a six percent increase over the trailing twelve months.

Assuming Danaos continues to pay down debt at a net level of $21.5 million, as it has over the past year, we can expect outstanding debt of $1,398.1 million by year-end 2021. I maintain my assessment that Danaos would be appropriately valued at an EV/EBITDA ratio of 6.5, which is below its 5-year average trailing ratio of 6.98. Below are share values at various levels for year-end 2021 debt and EBITDA levels.

Danaos is a buy at these levels. The company is executing well and has positioned itself to benefit from resurgent charter rates with a record-size fleet. Management has also guided that they “want to be conservative in the way forward,” which bodes well for shareholders as if the company is content with its current fleet size and can benefit from rechartering, we will likely see increased vigor in debt repayment, which will benefit shares. Additionally, with less concern about CAPEX and the eventual end of COVID, the company may make the much-awaited move of reinstating the dividend.

Author’s Note: If you enjoyed this article and found it useful, please consider hitting the orange “Follow” button up above to be notified when I publish new content and leave a “Like” down below if you would like more content covering Danaos or other marine transportation companies.

Disclosure: I am/we are long DAC. I wrote this article myself, and it expresses my own opinions. I am not receiving compensation for it (other than from Seeking Alpha). I have no business relationship with any company whose stock is mentioned in this article.