Midstream struggled in an otherwise strong week for the market, hurt by a court decision that rocked the Bakken while not offering much confidence for any midstream company seeking to develop energy infrastructure going forward. While the stock market grinded higher, led by growth stocks, utilities were flat and global listed infrastructure was negative, but both well outperformed midstream this week, this year and the last 5 years. 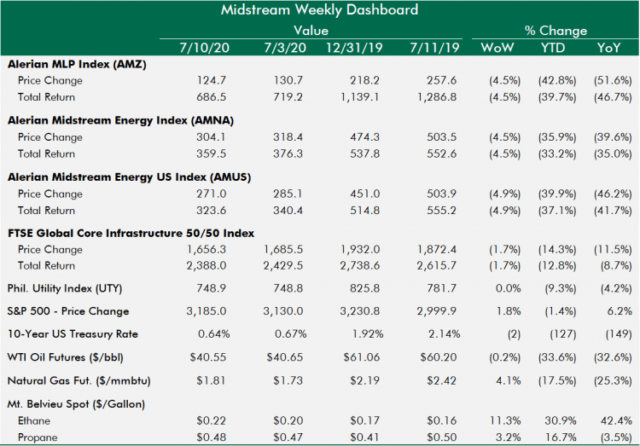 This week’s pipeline news has the potential to be historically significant. A major pipeline development with commercial support was cancelled due to delays and costs, and another existing pipeline was ordered to be shut after being approved and placed into service several years ago. This week’s news raises concern over the outlook for future pipeline development, especially in an election year. The pendulum has swung far to one side, but it doesn’t feel like there’s much hope for it to swing back the other way.

Oil prices held $40/bbl and oil price’s change YTD and YOY are outperforming all midstream indexes. Midstream has devolved into a levered play on oil prices, or at least that’s how the group has acted in recent times.

This week in July 2008 was the peak oil price of just over $145/bbl, its highest price ever. Also, around this time in 2014, oil prices peaked around $107/bbl and by the end of July they dropped below $100/bbl and haven’t returned since.

Some believe we get back to $100/bbl when under-investment lead supplies to run dry. That feels far away given current reliance on global production limits to sustain just $40/bbl. But things can change quickly.

Early July is also around the time in 2007 when MLPs peaked well before the global financial crisis. The July 2007 peak for MLPs was the tightest that the yield spread to the U.S. treasuries has ever been at only 42 basis points. By comparison, today the spread is nearly 1,200 basis points (AMZ’s nominal yield is 12.6%).

Since its most recent peak in June, the AMNA index has dropped 20.9% (AMZ has dropped 26.9%). The bounce off the bottom and the accompanying FOMO (fear of missing out) has faded even as oil prices grinded back above $40/bbl and the S&P 500 continued its ascent.

It is possible that the 100%+ bounce from the depth of despair in March was the post-COVID high point for 2020. Stranger things have happened, but a 30% rally back to early June levels feels daunting from here.

Such strength would require positive news big enough to attract generalist investors away from their ever-rising growth stocks in favor of the midstream sector and its spotty recent track record of sustaining outperformance. The announcement of a stay of the DAPL shutdown would be one clear positive, maybe big M&A could be another. But this week’s big M&A did not do the trick.

There were a few positive MLPs this week, mostly those either without traditional midstream assets (Enviva Partners (NYSE:EVA) and Sunoco LP (NYSE:SUN)) or smaller, more illiquid names like Delek Logistics (NYSE:DKL), Sprague Resources (NYSE:SRLP) and Cheniere Energy (NYSEMKT:CQP). The bottom 5 included two MLPs directly impacted by a Bakken Pipeline (DAPL) shutdown, including Phillips 66 Partners (NYSE:PSXP) and Energy Transfer (NYSE:ET). Crestwood Equity Partners (NYSE:CEQP), which doesn’t own a stake in the pipeline, was also down on the DAPL news given Bakken exposure. 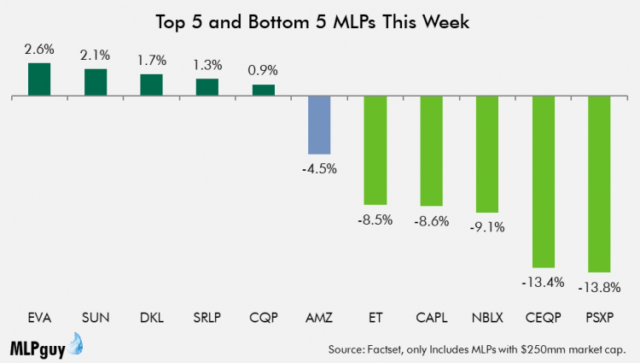 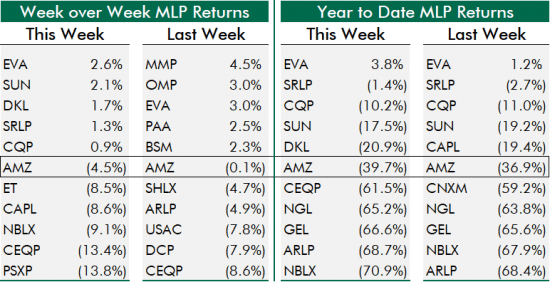 There was one positive U.S. midstream corporation this week, Equitrans Midstream (NYSE:ETRN), which is a beneficiary of the canceled Atlantic Coast Pipeline and a positive Nationwide 12 permitting update. ONEOK (NYSE:OKE), like CEQP above, was hurt by the DAPL news, and dropped 17%. Others with Bakken exposure, like Targa Resources (NYSE:TRGP) and Hess Midstream (NYSE:HESM), were also underperformers. 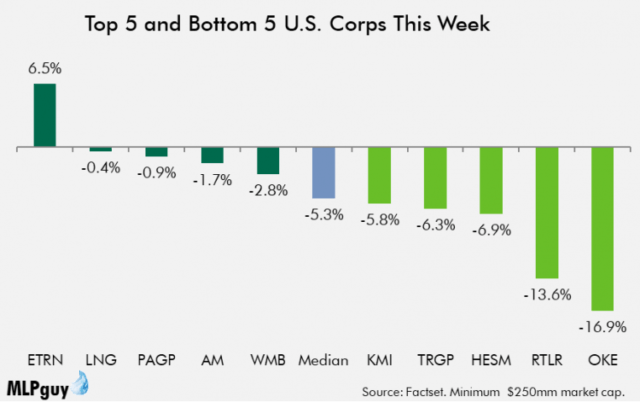 Cheniere (NYSEMKT:LNG) continued its strong relative performance of late, same with Antero Midstream (NYSE:AM), both repeating in the top 5 week-over-week. On the YTD leaderboard, HESM dropped a few spots this week. Of the top 5 performers in this group, 4 of them are primarily natural gas-focused, including Williams Companies (NYSE:WMB) at the top. OKE is back at the bottom of the group this week, replacing EnLink Midstream (NYSE:ENLC). TRGP also dropped a spot, down 55%. 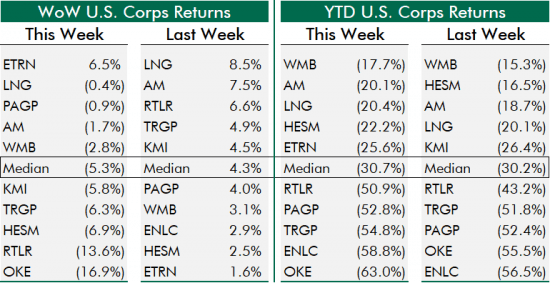 Canada was less volatile and with less dispersion than the U.S. midstream stocks, as per usual. Gibson Energy (OTC:GBNXF) was flat on the week, TC Energy (NYSE:TRP) outperformed the other larger names Enbridge (NYSE:ENB) and Pembina (NYSE:PBA). 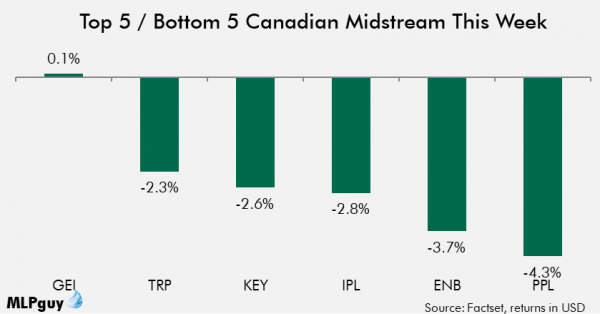 Pembina went from near the top last week to the bottom this week, continuing to trade with more volatility than in recent years. On the YTD leaderboard, TRP remains in front, but Gibson’s strong relative performance this week pushed it past ENB into second place.