Daily Insider Ratings Round Up 4/9/20 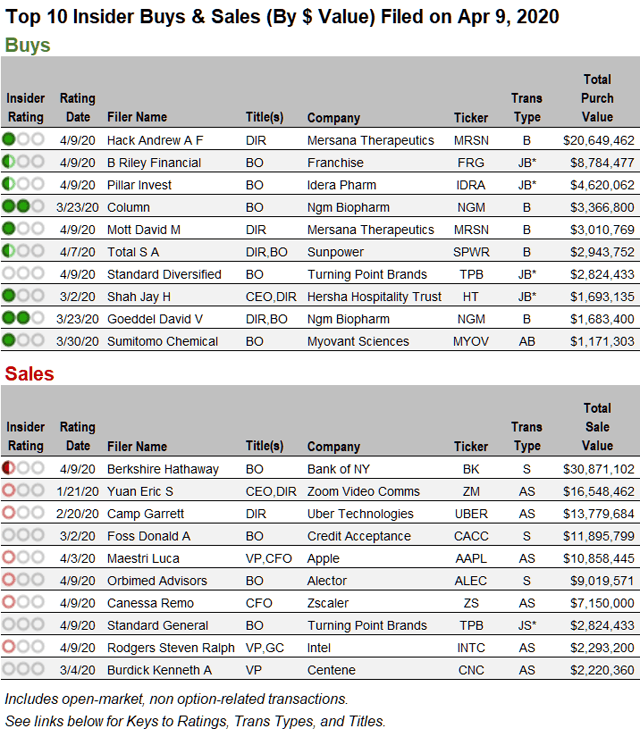 When a new insider transaction occurs, our programs mathematically score the significance of the company’s three-month insider profile based on numerous criteria programmed into our expert system.

Stocks that achieve an InsiderInsights Company Rating of “Significant” and “Leaning” Bullish or Bearish have been independently validated to generate alpha as a group and should be considered by investors looking for new long and short investments.

Seasonal Note: Insider filing volumes are waning, as companies close trading windows to insiders until after March-quarter financials are released. Insider trades usually pick up again in May, but it will be interesting to see if the immense market sell-off changes executives’ behavior during the normally slower month of April.

Insider trades were rated Significant at:

Insider trades were considered Insignificant at:

There is a Conflicted Insider Signal (both purchases & sales) at:

Did you miss our Previous Daily Round Up?

If you’re serious about using insider data in your investment process, you can’t find a better source of investment ideas (or a better value!) than our Daily Ratings Reports!

Trials have been turned off to our MarketPlace after we uploaded 2 Historically HUGE Bonus Reports containing all the active, “Significant” insider signals generated during the March Market Madness. They are just too valuable to simply give away to triallers with no intention of subscribing. So Subscribe Now, and be prepared when the market next opens!