CytoDyn’s (OTCQB:CYDY) most recent (4/17/20) Wall Street Live, “Next Superstock” promo, was worth the time invested for those who are trying to make sense of a CytoDyn investment. It was a new format with CytoDyn’s hard-working CEO Nader Pourhassan [NP] moderating a series of questions for CytoDyn’s two medical gurus, Drs. Bruce Patterson and Jacob Lalezari. Here are my takeaways. 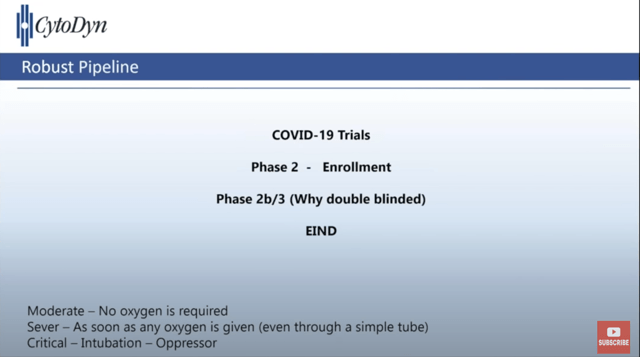 The Phase 2 trial is listed by ID NCT04343651 on clinicaltrials.gov with the following summary description:

The study start date was 4/1/20. The primary outcome measure for the study is clinical improvement of study patients on day 14 based on a designated total symptom score.

The estimated study completion date is listed as 4/4/21. CytoDyn’s ambitions for this study are actually far more accelerated. It is planning to move the trial to full enrollment as quickly as possible, a matter of weeks not months according to NP. Once fully enrolled, CytoDyn will get unblinded data two weeks later. (4:40/45:55).

As for the Phase 2b/3 trial (NCT04347239), its timeline is likely more protracted. Its study completion date on clinicaltrials.gov is listed as 4/1/2021. However, it will include 390 participants and its primary outcome measure is all cause mortality at day 28.

Everyone has heard the saying “if it seems too good to be true, it probably is.” How this saying applies to CytoDyn is no doubt a matter of dispute. I first raised the point in my 2/2019 article, “CytoDyn: What To Do When It’s Too Good To Be True?”

At the time COVID-19 was a nightmare that had yet to take hold. Accordingly, we are now at an entirely new point of discussion. Here we are not talking about an outsider’s assessment. As regards leronlimab’s effect in treating COVID-19, both of CytoDyn’s medical gurus have noted that they found its effect far beyond their expectations.

In their April Next Superstock presentation, both Drs. Patterson and Lelazari were overwrought in their admiration of leronlimab in the treatment of COVID-19 based on patients treated to date. Dr. Lalezari observed that both the world and CytoDyn got incredibly lucky with leronlimab (9:50/45:55).

Dr. Patterson describes the results seen to date as remarkable, with a single therapy restoring immune cells and quieting the cytokine storm unleashed by COVID-19 (9:10/45:55).

He later notes how other therapies in trials are attacking COVID-induced cytokine storm on a piecemeal basis while leronlimab is correcting COVID-induced deficiencies caused across the spectrum of the disease; leronlimab’s performance has been truly “unbelievable” (31:13/45:55).

In order to forestall apoplexy from CytoDyn bulls, let me note the following lead return from a 4/20/20 Google search of the adage:

“The old adage, ‘If it sounds too good to be true, it probably is‘ isn’t always correct. In fact, the suspicion, cynicism, and doubt that are inherent in this belief can and does keep people from taking advantage of excellent opportunities.”

So there we have it. What is an investor to do as regards CytoDyn? First and foremost I urge caution. The situation is filled with both peril and potential opportunity. CytoDyn’s share price for the last year has been a picture of volatility, per the price and volume chart below:

As for the future, I believe it will be strongly influenced by events, particularly those discussed below.

CytoDyn set its table with several near and midterm upcoming catalysts, including potential UK COVID review of leronlimab, potential BLA filing and later a journal article

During CytoDyn’s April Next Superstock promo, NP set out several tasty morsels for investors to look forward to. He suggested that the UK will be looking at COVID-19 therapies as early as this week.

In particular, CytoDyn’s CRO Amarex indicated that under a special program the United Kingdom would be evaluating CytoDyn’s COVID data with potential to provide a limited approval for leronlimab. He noted Amarex’s optimism for a favorable decision given leronlimab’s data (18:48/45:55).

For another potential catalyst this week he noted that he had put out the word to all of CytoDyn’s departments that its BLA for HIV combination therapy “needs to be filed next week.” No sooner were the words out of his mouth than he noted that although CytoDyn had all the required information that if something came up at the last minute he would advise (33:/45:55).

He also noted that with Coronavirus disruption times were tough. You be the judge. Will the BLA get filed this week? I hope so; it’s not much of a catalyst. It’s something that should have been done last year. Once it gets filed, its primary significance is that it will set the clock on CytoDyn’s first critical FDA approval decision, likely this year.

Assuming the data is as compelling as Dr. Patterson has boasted during the Next Superstock promo, then leronlimab would stand a good chance of advancing to the first tier of prospective COVID therapies. This could be a significant step forward for leronlimab. Dr. Patterson has suggested that such an article could be in print within 4-6 weeks. (43:30/45:55).

Atypically for a company of CytoDyn’s diminutive size, it has significant supplies of leronlimab available from a respected source should it ever be approved. It was about a year back when CytoDyn came out with the following press release bombastically titled:

The reference to “$1 Billion Worth of Leronlimab” caused my skin to crawl then and does so now. The very idea that any quantity of leronlimab worth a billion dollars was at issue seemed and seems to involve a gross overstatement, beyond the pale for any but the least reputable company.

What is significant is that with Samsung as the potential source of leronlimab, CytoDyn has corralled one of the world’s top players as a member of its team. Accordingly, instead of supply being a weak point should leronlimab be needed for COVID-19, it looks to be a strong point.

According to NP, Samsung has agreed to deliver 1.2 million doses, enough for 600,000 patients. It can ramp up to a million doses a month. In addition, NP has been in contact with an American manufacturer, AGC, which can provide supplemental supply if necessary (36:11/45:55).

As matters now stand it appears that CytoDyn is well-fixed from a supply standpoint. The two questions are whether there will ever be an FDA approval such that demand might arise for so much as a single vial. That will depend on how catalysts play out as described in this article.

A second question which I will leave to a later discussion is how CytoDyn will ever pay for its arrangements with Samsung if leronlimab fails to get its approvals.

I am a long way from convinced that leronlimab is going to turn into a commercially viable product for CytoDyn. However, I do see a clearer path forward for it to achieve such a status than I have in the past.

The most important catalyst in my view will be whatever Dr. Patterson is able to publish. Its reception will tell a great deal about CytoDyn’s future. If he produces an article that effectively communicates leronlimab’s attractions in treating COVID’S more sinister impacts in a way that resonates with the scientific community, it will be a major positive for CytoDyn.

This is likely the case even if COVID-19 diminishes from its present fearsome cast on the world’s landscape. As he points out in the Superstock promo, there are other viral infections, including the flu, that give rise to deadly Cytokine storm events (34:20/45:55).

Howsoever you may choose to invest in CytoDyn, if at all, use great care. It is a penny stock at heart. Take all comments, with a grain of salt, particularly those which are over the top bear or bull. CytoDyn is an OTC stock and carries extra risk in common with other such stocks.

Disclosure: I am/we are long CYDY. I wrote this article myself, and it expresses my own opinions. I am not receiving compensation for it (other than from Seeking Alpha). I have no business relationship with any company whose stock is mentioned in this article.

Additional disclosure: I may buy or sell shares in CytoDyn over the next 72 hours.

Previous PostSE: Gang i hjuleneNext PostAviation – If aircraft can copy the way geese fly, they will save fuel | Science and technology