As we live in the age of e-commerce, one company that is undoubtedly on the top of everyone’s minds is Amazon (AMZN). In some ways, Amazon has become a boogeyman to the rest of corporate America, as it has and continues to disrupt a number of industries, most notably of which is retail.

While Amazon’s competitors, both present and future, are rightfully wary of their ambitions, I don’t view this as necessarily being a bad thing. If not anything else, Amazon has given many companies a wake-up call to innovate their business models to better serve customers and transition into the future. I believe companies that are resilient in responding to this challenge will not only survive, but also thrive, especially in the growing healthcare sector. 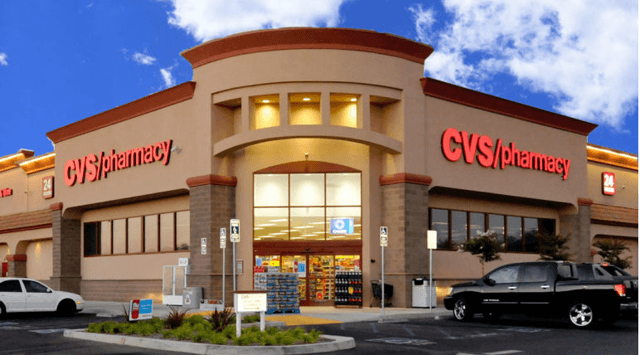 A Company Poised To Thrive

CVS Health (CVS) is one such company that has been resilient to a changing landscape. Perhaps in response to Amazon’s PillPack acquisition in May 2018, CVS made a splash by acquiring insurance giant Aetna in late 2018, thereby transforming it into one the largest integrated healthcare companies in America. Along with Aetna came 33 million members on the medical, dental, and pharmacy benefit management (PBM) side, adding to the already robust PBM business that CVS had from the Caremark acquisition it did earlier.

This integrated model plays well into CVS Heath’s ambitions to become a leading healthcare company as its 9,900 current retail locations are within 3 miles of 70% of the U.S. population. By integrating the insurance business, CVS is able to reduce the cost of care for Aetna’s members while boosting profits to its bottom line at the same time. I believe this vertical integration compares favorably to the horizontal integration that its top competitor, Walgreens (WBA) has pursued through its acquisition of Rite Aid (RAD) stores.

While the word “synergy” gets thrown around a lot when it comes to corporate mergers and often fails to materialize, I think this merger actually makes sense from an operational efficiency stand point, with the rapid growth of MinuteClinics being a prime example. 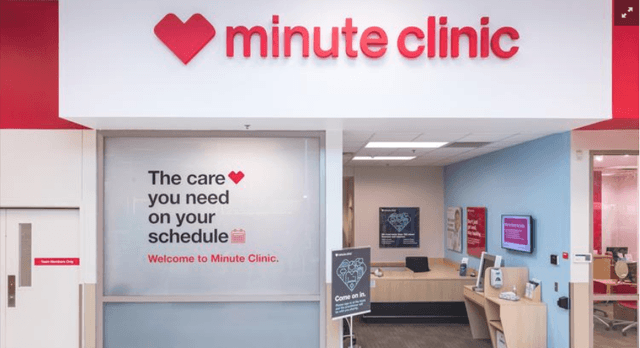 According to CVS Health’s June 2020 Investor presentation, the company experienced an impressive 600% YoY increase in utilization of telemedicine through its MinuteClinics even before the impacts of COVID in April and May. What I find attractive about Aetna is that its eligible members receive services at MinuteClinics at no cost. I believe this provides a strong competitive advantage and a moat to both the insurance and physical retail/healthcare locations as the integrated model gives it a low price advantage without necessarily sacrificing margins. Over time, I see tremendous opportunity for CVS to convert its large store formats into HealthHUBs. By the end of 2021, the company expects to have 1,500 HealthHUB locations, which equates to 15% of its current physical footprint.

In the medium to long-term, I see increases in the aging population and a move towards suburbanization as strong tailwinds. According to reports, COVID has accelerated the pace of millennials moving away from urban centers to suburbs, where most of CVS’s locations thrive. This is due to the higher infection rates of urban centers and the increased adoption of remote work that is expected to continue even after the pandemic eases.

The aging populating is another tailwind for healthcare companies like CVS Health. I like the fact that CVS saw a 1,000% increase in home delivery in the latest quarter, even before the brunt of COVID in April and May. This increased home delivery capacity undoubtedly helps CVS better serve a growing population of 65+ year old seniors, which is expected to reach 73 million, or just under 20% of the population, by the end of 2030. 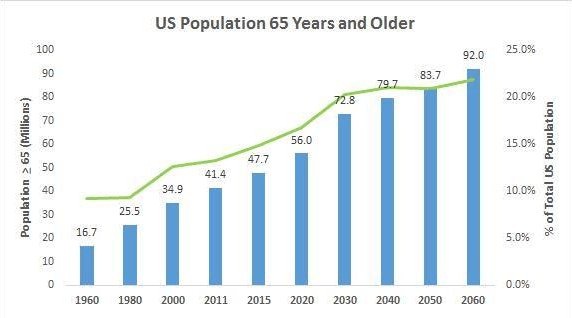 In addition, according to CMS, national healthcare spend is projected to grow at an average rate of 5.5% per year through 2027 and reach an astounding $6.0 trillion by then. This puts healthcare spend on pace to grow at 0.8 percentage point faster than the US GDP, resulting in 1 in 5 dollars of the GDP being healthcare related within a decade. I believe that CVS, as a large integrated healthcare provider company, is in a prime position to benefit from this trend.

Looking into the financials, CVS is showing no signs of slowing down as free cash flow has grown at a solid clip, increasing 63% since 2015 to $9.00 per share for the trailing twelve months. Encouragingly, this is in spite of approximately 280 million new shares being issued in relation to the Aetna acquisition. 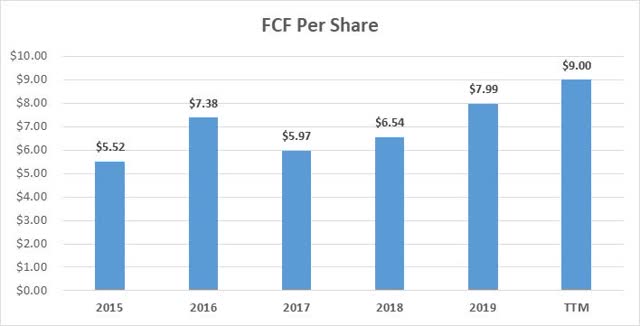 (Source: Created by author based on company financials)

As seen below, CVS was on track to reducing its share count by roughly 4% per year before the Aetna acquisition. I would expect share repurchases to continue after the company further pays down the debt related to the acquisition. 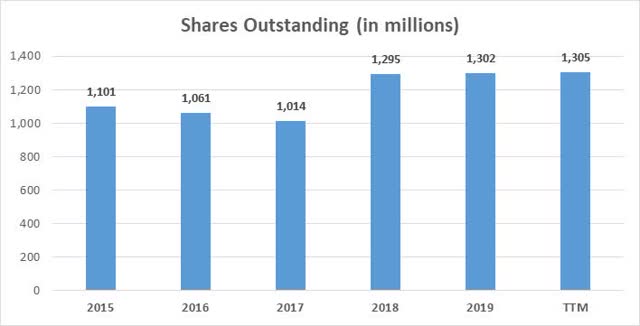 So far, the company has been aggressively paying down debt with excess free cash flow. Since 2018, long-term debt has been reduced by nearly $6 billion. As debt was used as part of the financing for the Aetna acquisition, I view debt pay down as a proxy for share repurchases. In essence, if all of the debt related to the Aetna acquisition were paid down, then the debt-financed portion of the Aetna deal would be contributing to the EPS as free and clear of encumbrances on a going forward basis. 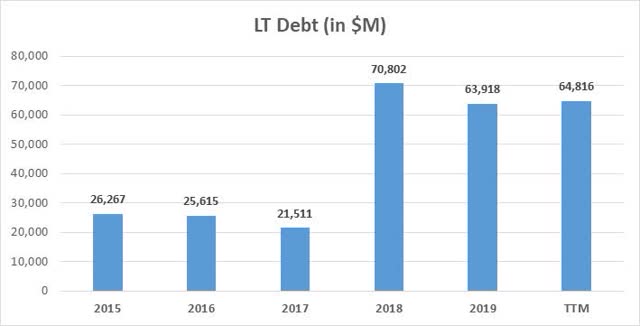 Execution risk and the high debt load remain as key risks for CVS Health. I’m encouraged, however, by the integration and debt reduction efforts so far. Nonetheless, investors should continue to monitor this.

In addition, COVID continues to present challenges to physical retail locations, especially with the risk of a second wave of infections. As seen below, the company has seen a slight drop-off in Pharmacy sales for the month of May. I don’t find this too concerning, as the slight YoY decline could be more to do with what I would call “medicine cabinet stuffing” that occurred March, as the figures show below. In addition, I’m encouraged by a lower decline in Front Store sales in May compared to April.

While the threat from Amazon will loom in the background, I believe CVS Health is way ahead of the game, as it has and continues to transform itself into a leading healthcare provider company. Its growing base of MinuteClinics and HealthHubs with Aetna integration maximizes the usage of its physical locations and helps it to form a meaningful moat around the business. In addition, CVS’s growing digital presence through Telemedicine and at-home delivery of drugs and healthcare supplies tells me that management has the right strategy in place as it adapts to a changing healthcare landscape.

I believe shares are highly undervalued at the current price of $64.49 and a PE ratio of 9.1. I also view the 3.1% dividend yield as safe, with a cash payout ratio of just 22%. This allows the company to steadily reduce its long-term debt. I have a one-year price target of $85 based on the catalysts described above, which, equates to a conservative PE ratio of just 12.0 and represents significant upside from today’s levels. 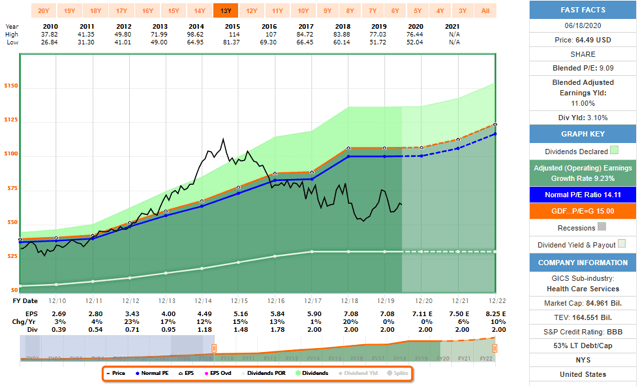