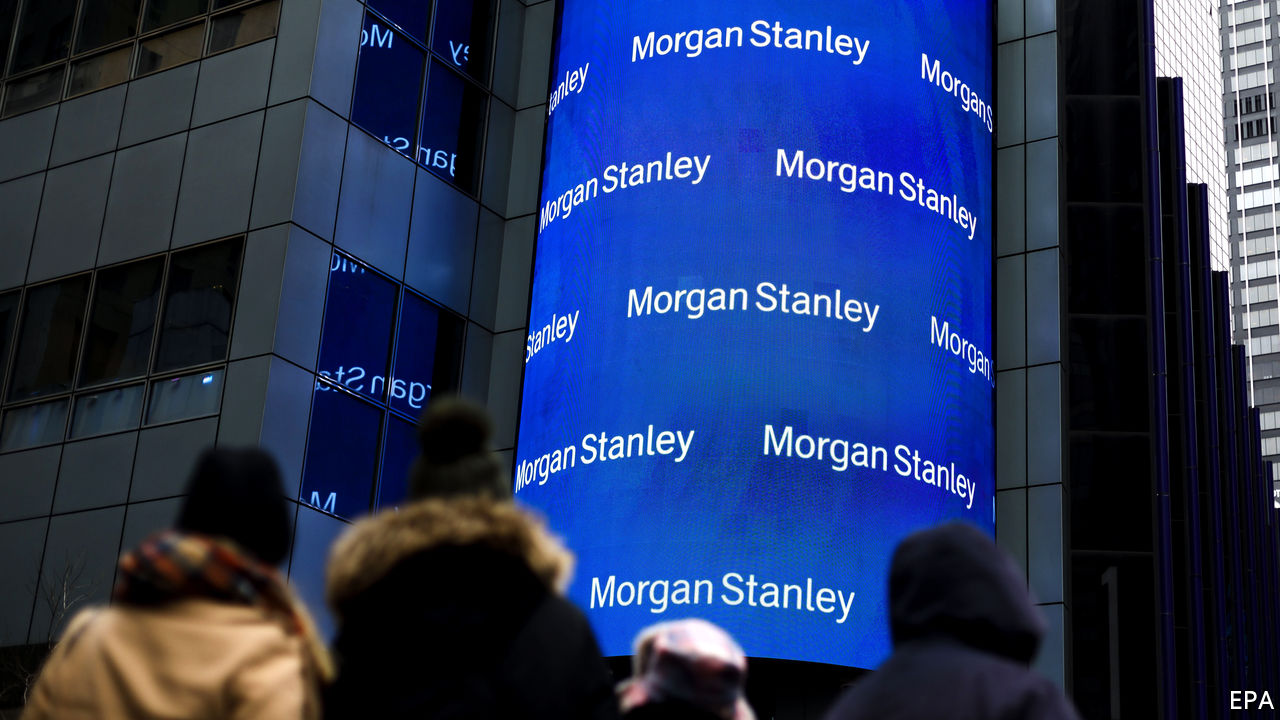 “I THINK OF it like an aircraft-carrier,” said James Gorman, the boss of Morgan Stanley, last March. He described his bank’s wealth- and asset-management divisions as “ballast”, steadying the ship, because they bring in consistent, recurring revenues. The “engine room” is investment banking, which earns large, lumpy sums when markets are strong but can falter during a crisis. “We might be a little slower than some others, because we’re dragged by the ballast, but we’re more stable.”

This strategy has helped turn Morgan Stanley—badly battered in the financial crisis of 2007-09—into one of the steadiest in the Wall Street fleet. A decade ago the bank earned most of its revenues and two-thirds of its profits from its engine room. Its core business then was buying and selling securities. But last year wealth- and asset-management contributed a shade more than the investment bank to both revenue and profit. Morgan Stanley’s market value, as low as $7bn during the crisis, is now around $88bn—more than Goldman Sachs, its old rival and once Wall Street’s undisputed king.

Mr Gorman wants even more ballast. On February 20th Morgan Stanley said that it planned to buy E*Trade, an online broking firm, for around $13bn, 34% above its market value the previous day. Morgan Stanley will acquire 5.2m retail customers with $360bn in assets and an online bank with $56bn of cheap deposits. After the merger is complete, wealth- and asset-management will have become the bank’s main business, making 57% of profits, up from just a quarter in 2010.

READ ALSO  SE: It's Critical Not to Politicize a Covid Vaccine: J&J CEO

In buying E*Trade, Morgan Stanley is acquiring a different clientele from that which it is used to serving: merely well-heeled, rather than truly rich. Its current 3m clients hold $2.7trn in assets with the bank; E*Trade’s 5.2m customers hold just $360bn. The logic is that digital services will allow Morgan Stanley to make money from customers who, being less wealthy, might not have been profitable in the past; and those customers may also one day be very rich. It is also making a bigger step into managing employees’ share plans. In February 2019 it bought Solium, a Canadian firm that managed employee stock plans, for $900m. Buying E*Trade will make Morgan Stanley a leading player. It will acquire 4,000 corporate customers and $580bn of stock held on behalf of their staff.

Mr Gorman claims he has long been interested in E*Trade, approaching the firm when he was at Merrill Lynch in 2002 and again while at Morgan Stanley in 2007. But recent turmoil in the discount-brokerage market may have made E*Trade keen to sell. Last October Charles Schwab, the biggest of America’s discount brokers, declared that it would no longer charge retail customers for trading shares online. The share prices of all its rivals slumped; E*Trade, which made 17% of its revenues from commissions, was forced to follow suit the next day. On November 25th, Schwab and TD Ameritrade, another leading broker, announced they were to merge. All that left E*Trade vulnerable.

Both deals could still be scuppered by regulators. This is the largest acquisition attempted by any of America’s big six banks since the crisis, though there have been tie-ups between smaller banks. But Americans have plenty of choice among firms offering to manage their wealth, from giants such as Fidelity and Vanguard, which offer their own funds, to brokerages and fintech upstarts. With Morgan Stanley muscling in, the competition will get fiercer still.