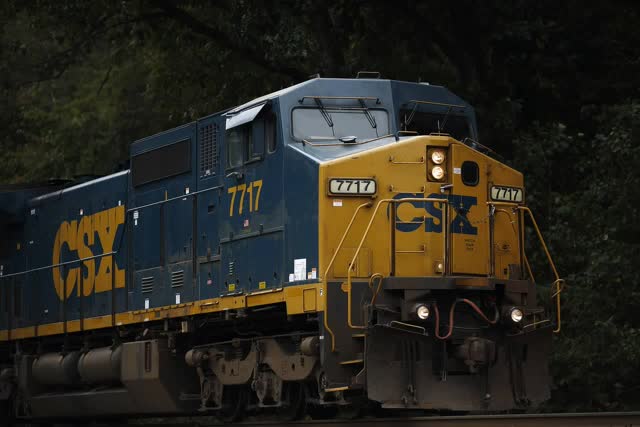 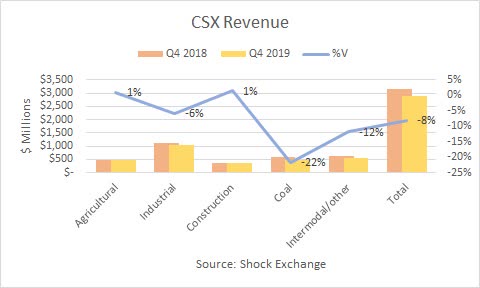 Of the company’s five major product segments, only Agriculture and Construction reported increases in revenue. Agriculture revenue rose 1% Y/Y on a 1% increase in volume and flat ASP. I assumed Agriculture would be a catalyst this year after trade tensions thawed with China. However, the coronavirus has made the outlook cloudy. President Trump recently announced $19 billion in aid to farmers, which could imply farmers may have suffered setbacks due to the shut down of the economy.

Construction was buoyed by increased shipments for construction and paving projects. Meanwhile, Coal fell over 20% on a 17% decline in rail traffic and a 5% decline in ASP; weak global benchmark pricing weighed. Intermodal revenue fell by double-digits due to a rationalization of lower density lanes. It represented over 40% of the company’s total revenue.

Three of CSX’s produce categories also reported declines in volume. The Industrial segment reported a decline in the high-single-digit percentage range. It will likely fall further now that several businesses have been shut down due to social distancing. Coal volume fell by double digits. Competition from low natural gas prices will likely create more headwinds. 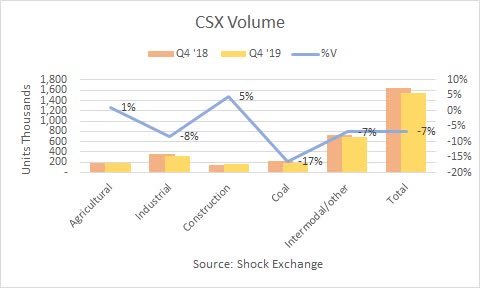 Bernstein analyst David Vernon believes low oil prices could give an advantage to trucking pursuant to transporting products. This could create even more headwinds for rail traffic in the first half of the year. 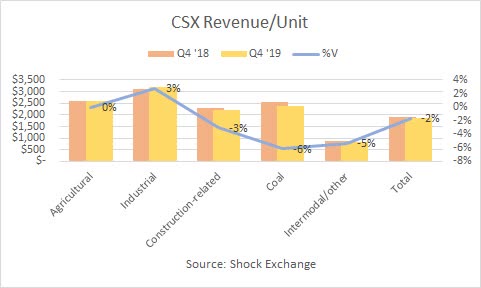 The ability to hike prices could dissipate with a sharp drop in the economy. Falling rail traffic and flat to declining ASP could make for a tough first half of 2020 for CSX.

Canadian railroads have consistently delivered operating ratios sub-60%. Their U.S. counterparts have gradually closed the gap via cost containment efforts. Last quarter CSX reported an operating ratio of 60%, stellar for a U.S. carrier. It could be difficult to repeat the feat now that CSX is losing scale due to falling freight revenue. Last quarter total operating costs were $1.7 billion, down 7.6% Y/Y. They fell less than the 8.2% decline in revenue, which caused the company’s operating ratio to deteriorate.

Labor costs were flat, while costs for materials and fuel fell 20% and 15%, respectively. Management has made significant reductions in head count over the past few years. It is still looking for ways to cut labor costs that do not simply involve reducing headcount. Labor was CSX’s largest expense item at 38% of total operating costs. Cutting these costs could be important if management wants to maintain its stellar operating ratio. The question remains, “At what point does more head count reductions lead to a decline in employee morale?”

EBITDA was $1.5 billion, down 6% Y/Y. EBITDA margin was 52%, up about 120 basis points versus the year earlier period. The decline in scale caused EBITDA on a dollar basis to decline. I expect more of the same in Q1 2020. The company has been more efficient than its U.S. counterparts, and investors have historically rewarded CSX with a robust valuation. CSX currently has an enterprise value of $63 billion, or 10x last 12 months (“LTM”) EBITDA. I expect more declines in revenue and EBITDA, and it may not subside after the economy re-opens. I am not sure the valuation reflects this.

CSX is down over 20% Y/Y. I expect dismal results for the first half of the year and weak guidance on the Q1 earning call. Sell CSX.

Disclosure: I am/we are short CSX. I wrote this article myself, and it expresses my own opinions. I am not receiving compensation for it (other than from Seeking Alpha). I have no business relationship with any company whose stock is mentioned in this article.