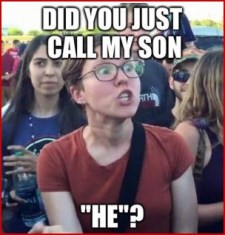 I thought this was interesting: https://www.coindesk.com/coinbase-severance-apolitical-mission

Essentially, Coinbase is paying employee SJWs to leave the company if they are unhappy with the company’s lack of an “activist mission.”  Both parties walk away relatively happy:  Coinbase can focus on doing Coinbase things and the SJWs can find new jobs elsewhere where they are happy doing SJW things.  The alternative is internal strife and a deteriorating company culture.  Some people might see the Coinbase’s offer as an extortion payment.  Perhaps it is.  Certainly, it is a non-violent solution to the problem.  People who can’t live together probably shouldn’t.

If only our political associations could be as easily broken up.

What is instructive here is that Coinbase has determined that it needs to pay severance to people who won’t get with the program.

Back in the old days when things were a lot more free market-oriented, if you didn’t get with the program, the only separation package you got when shown the door was a boot to the butt that separated from your butt only after you were out the door.

I’m sure Coinbase made economic (and legal) calculations that show it makes sense to just pay the SJWs off but I am sure there are other ways troublemakers could have been pushed out (Off the top of my head I can think of a couple ways). That said the one thing that is certain is the SJWs are noisemakers so it is going to be interesting to see how all this plays out.

READ ALSO  The Reckitt Benckiser share price is cleaning up! Here’s what I’d do right now

And no doubt, if this becomes popular, at some future point legislation will emerge that prevents employers from asking prospective employees if they are “woke.” So it is possible a woke employee could take a job only for the experience of being bought out for being an SJW.

From a big picture perspective, we need to focus on returning to free markets, not the curious workarounds. Workarounds in the long run will be captured by the statists. Remember, health care insurance was originally provided to employees as a workaround to wage controls during World War II. Before that healthcare costs were very low and you just went to a doctor when you needed care and paid out of pocket.

Now, look at the expensive mess that healthcare is with government getting involved in what was at the start only a workaround.

I am not against workarounds per see, a small tiny one that does not have grand applications may be fine, but I am highly concerned as to where broader applied workarounds lead. I will take fewer regulations and free markets any day.