Earlier this month, growth-oriented master limited partnership Crestwood Equity Partners LP (CEQP) gave a presentation to its investors. As is usually the case with presentations like this, the company devoted a significant amount of time discussing its current operations and position in the industry. The company also naturally made an investment case in itself. The company also discussed some of the ways that it has been working to adjust to the low energy price environment that was precipitated by the outbreak of the COVID-19 coronavirus. In that regard then, the presentation does appear to be at least partially intended to comfort investors. Fortunately, the company does do a reasonably good job at that, and Crestwood Equity Partners is one of the stronger midstream partnerships in the industry, and this positions the company well to ride out the current conditions until energy prices return to a somewhat normal level.

Crestwood Equity Partners is a mid-sized midstream company that focuses on natural gas and natural gas liquids. The company has operations in most of the basins in which these resources are produced: 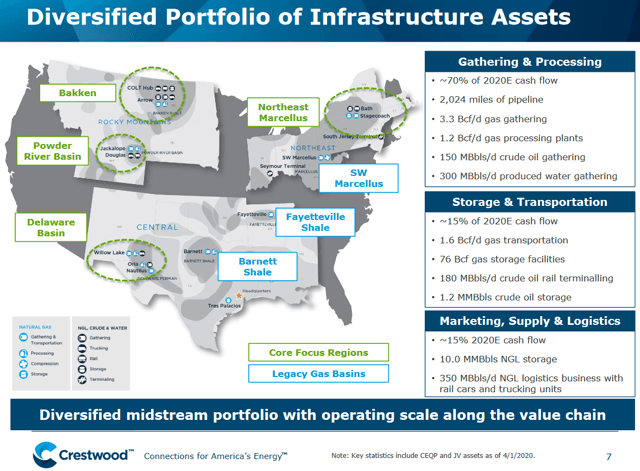 This is something that is nice to see as it provides the company with a certain amount of diversity. It is nice to see this because each of these basins has somewhat different fundamentals. For example, the basins in the Appalachian region are much more weighted towards the production of natural gas than the Bakken shale is. In addition, each of these regions has a different cost of production. For example, it is cheaper to produce resources in the core areas of the Permian basin or in the Marcellus shale than it is in the Bakken shale. Thus, by having its operations in a variety of locations, the company is effectively diversifying its operations across all of these different fundamentals. This could be good if production either increases or decreases in one basin but not another in response to energy price fluctuations. We saw this happen in the middle of the decade when commodity prices crashed and production declined much more in the Bakken than it did in the Permian basin. 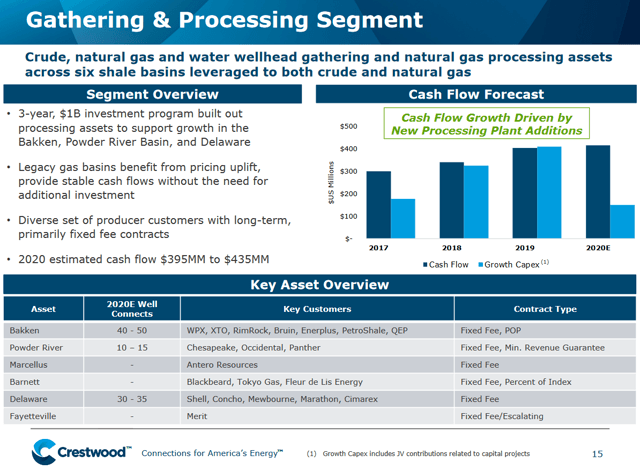 As we can clearly see here, the company’s gathering and processing assets are located in essentially every major basin in the continental United States in which natural gas is produced. As is the case with many midstream operations, the company performs these operations under long-term, fixed-fee contracts in which revenues correlate to volumes and not to the price of the commodities. At least, this is true in the case of gathering pipelines. The company’s processing plants generally charge fees in which the fees are set by a certain margin over the prevailing commodity price. This is why we sometimes see these companies have lower revenues and cash flows despite most of the revenues being based on a “toll road” model.

One of the company’s most important gathering and processing systems is the Arrow system in the Bakken shale: 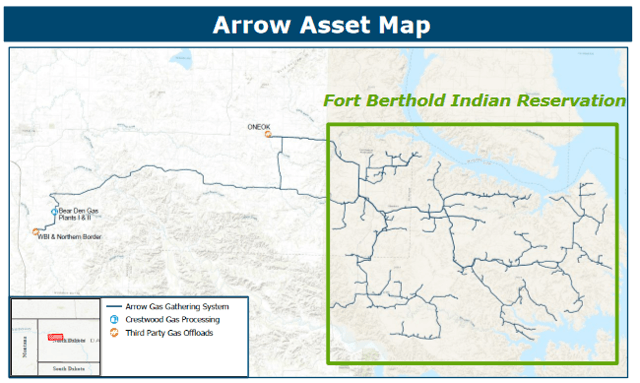 The Arrow system covers 150,000 acres on the Fort Berthold Indian Reservation in North Dakota and contains about 702 miles of pipelines. The system is capable of gathering crude oil, natural gas, and water. The system’s total capacity is 150,000 barrels per day of crude oil, 150 million cubic feet per day of natural gas, and 110,000 barrels per day of water. The system also has the capacity of processing 150 million cubic feet of natural gas per day or essentially its entire system capacity. This system has also been a center of growth for the company over the past few years as Crestwood Equity Partners has invested approximately $600 million over the past three years to build out this system, which includes a large expansion to the Bear Den processing plant that allows Crestwood Equity Partners to internally process all the natural gas that is gathered by the Arrow system. As I pointed out in my last article on the company, this was one of the projects that stimulated growth for the company in the first quarter.

One of the most significant effects that the COVID-19 pandemic had on the energy industry is to drive down the price of both oil and natural gas. It is unlikely that anyone reading this is unaware of this fact. One of the ways in which exploration and production companies have responded to this is by sharply reducing their spending on both growth and on other things. I discussed this in a few recent articles such as this one. We can see the effects of these spending cuts already on Crestwood Equity Partners’ operations in the Bakken. It is currently estimated that the company’s upstream customers will only make 40-50 well connections to the company’s Arrow system this year, which is down significantly from what they did last year:

As we can see, this number could very easily be lower than what we saw during the last year that West Texas Intermediate crude oil dropped below $30 per barrel. This reduction in well drilling could unfortunately have a negative impact on Crestwood Equity Partners’ volumes in the near term. The company itself expects them to decline in the second and third quarters, but I think that volumes could be down for somewhat longer. This is especially true if energy prices do not recover quickly (as I expect) or if a second wave of COVID-19 force politicians to shut down the economy once again. This would have a negative impact on the company’s revenues and cash flows over the course of the year.

The Arrow system in aggregate accounts for about 45% of Crestwood Equity Partners’ revenues, or at least it did in the first quarter. Crestwood does not state what percentage of its cash flow comes from that region, but if we assume that it is proportional to revenues, then we can estimate that approximately 40-50% of its cash flow comes from that region. Therefore, the roughly 69% reduction in well connections could reduce its overall cash flow by about 30%. For its part, Crestwood’s management does not expect its cash flow to decline by that much. The latest management guidance states that the company’s full-year 2020 cash flow will be down by about 14% from its annualized first-quarter run rate. As I do think that management may be somewhat optimistic in expecting a recovery in the second half of the year, it is likely that the actual cash flow decline will be somewhere between those two numbers.

READ ALSO  Beirut explosion: ‘In the blink of an eye, the whole world changed’

Some readers may point out that we have already seen energy prices recover somewhat. It is certainly true that they are currently much higher than their lows during the coronavirus-driven shutdown. However, the world remains quite oversupplied with both oil and natural gas as economies around the world have still not completely opened up to where they were. In fact, here in the United States, we have been seeing another round of shutdowns. At the end of June, Arizona Governor Doug Ducey ordered his state’s businesses to shut down again. In Pennsylvania, Governor Tom Wolf just ordered a shutdown for the southwestern portion of the state that took effect on Thursday. In addition, many people around the world are still quite hesitant to take air travel, cruises, or engage in other activities that consume fuel. It is unlikely that the oversupply will clear until that happens or until we see more reductions in production. The clearing of this oversupply is necessary in order for energy prices to return to their previous levels due to the law of supply and demand.

One thing that many midstream companies have done in response to the upstream spending cutbacks is to reduce their own spending on growth projects. This makes some sense as the fact that production growth over the next year or two is going to be lower than expected at the start of the year means that there is no longer the same need for new midstream infrastructure that there once was. In response to this, Crestwood Equity Partners has reduced its spending on growth projects by 64% in 2020 compared to 2019 levels. The company has also reduced its planned spending on maintenance by 15% over 2019 levels: 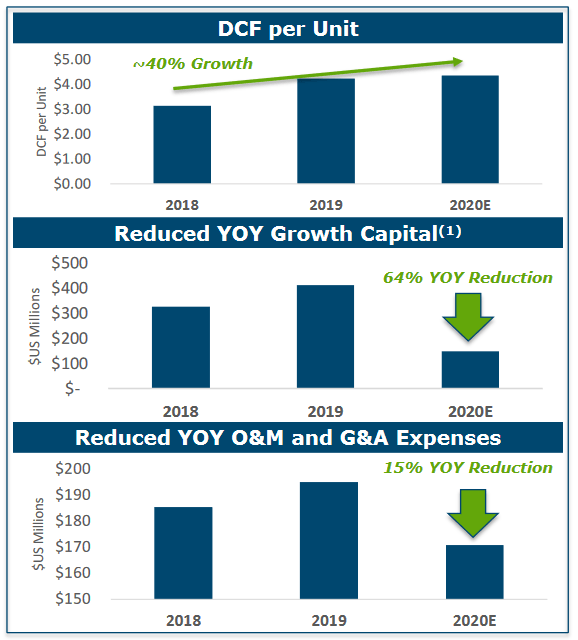 It is interesting to note that these cuts come in spite of the fact that the company expects its distributable cash flow to be somewhat higher than what it was last year. We have in fact already seen this as Crestwood Equity Partners’ results from the first quarter of 2020 were significantly stronger than what it had in the first quarter of 2019. This was largely the result of the company’s growth projects that came online last year. The extra cash flow from these projects combined with the lower spending levels is why the company expects to have a higher distributable cash flow than last year. This is a reasonable assumption if we assume that the upstream production costs do not hurt the company’s upstream volumes too much.

In various previous articles, such as this one, I discussed how one of the biggest concerns that the market has regarding the shale oil and gas companies is the risk of bankruptcy with energy prices being as low as they are presently. This comes about because of the fact that the overwhelming majority of upstream companies have not been able to generate positive cash flow even with oil and gas prices at levels significantly higher than today. In some cases, a bankrupt company might be able to break the contracts that it has with a midstream company, although admittedly thus far Chesapeake Energy (OTCPK:CHKAQ) has been having a difficult time doing that. This risk though is the reason why we want to have a look at a midstream company’s customer base. Here it is: 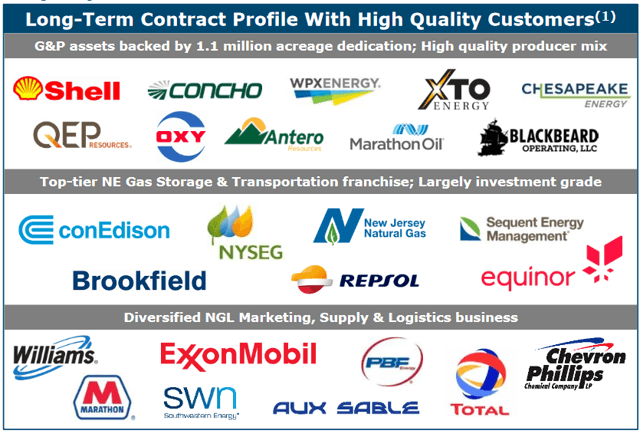 Unfortunately, Crestwood Equity Partners does not break down its customer base in terms of what the extra credit rating of its customer base is as many other companies that we have discussed here have done. We do however see that a sizable percentage of the company’s customers are large and well-financed companies. This is a comforting fact as these companies are likely to be able to ride out the current market conditions better than a smaller or weaker company. Thus, we should have at least some confidence to know that a sizable percentage of the company’s contractual revenues are secure.

In conclusion, Crestwood Equity Partners appears to be reasonably well-positioned for the current environment. Unfortunately, the company’s upstream customers have been cutting back on their drilling and production activities, which could prove to be a drag on its cash flows in the near term. While management does expect the firm’s distributable cash flow to be higher than it was in 2019 on a per-unit basis, I am a little more skeptical unless energy prices recover quickly. Overall though, Crestwood Equity Partners could be a reasonable option here.

Additional disclosure: This article was published to Energy Profits in Dividends a week ago so subscribers to that service have had that amount of time to act on it.

Previous PostTesla to hold annual shareholder meet and ‘Battery Day’ on Sept. 22Next PostThe pensioner bandit – At 78, a Sardinian ex-kidnapper is on the run | Europe