Crescent Point Energy (CPG) is a company with costs that are somewhat higher than the best. But management makes up for those higher cost by producing a high percentage of oil. That usually makes for superior margins. Lately, oil has been so out of favor as prices crashed to record lows (for recent years) that the company’s strategy was “out of order”. But that means the share price is at bargain levels for those who believe that the superior margins of oil will be back to historical norms.

In the meantime, this company pays for its expenses using a lot of Canadian dollars, while receiving sales prices that are somewhat linked to United States dollars. Any debt in United States dollars has been hedged to reduce the long- term currency risk. The debt itself is on the balance sheet in Canadian dollars, while the hedging is disclosed in the footnotes. I have often thought that the current value of this type of hedging should appear in long-term debt so investors would get an accurate gauge of the value of long-term liabilities.

But so far, the accounting agencies in charge do not agree. Therefore, investors do need to read the financials completely, as this company uses the rules in Canada even though it is currently listed on the NYSE. Another significant difference in accounting is that Canadian accounting allows impairment charges to be reversed as market conditions change, whereas the United States accounting does not allow for the reversal of impairment charges.

Crescent Point operates in both the United States and Canada. In that sense, this company is similar to Baytex Energy (BTE), which also operates in both countries. But where Baytex began as a heavy oil producer, this company generally went for less-discounted products but also did some more expensive secondary recovery projects. 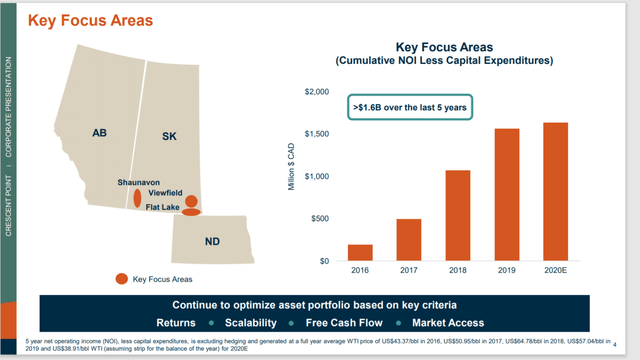 This is one of the few companies covered with no operations in Alberta. The Bakken part of the leases is both on the Canadian and the North Dakota side of the border between the two. The North Dakota production is nowhere near as significant for Crescent Point as the Eagle Ford production is to Baytex Energy. 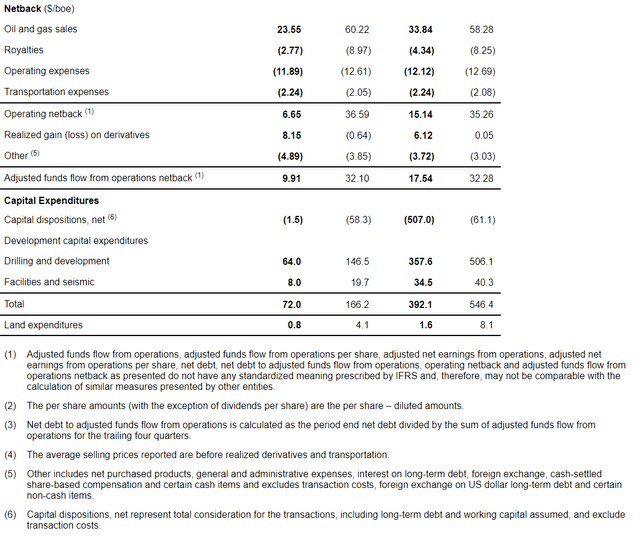 The operating netback margin was running at more than half of the selling price as shown above until the coronavirus challenges decreased pricing significantly. Similarly, in the previous fiscal year (when things were closer to normal historical conditions), the adjusted cash flow margin was roughly half of the average selling price of the production.

The result was that Crescent Point was not “burning cash” at a furious rate from operating activities during a period of low commodity pricing. In fact, the company had some cash flow before the commodities gains enhanced that cash flow considerably.

The margins posted here are comparable with some very good margins throughout the industry.

Until recently, the cash flow actually began to run at about the level of the debt. Now Crescent Point had been rapidly repaying debt. 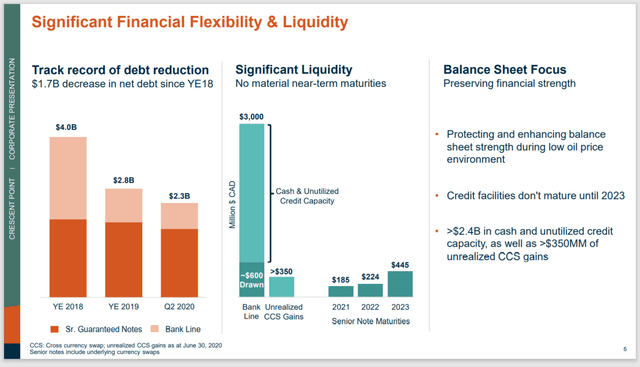 As shown above, those “gains” are not with the debt. The individual investor has to do the work that the company presentation did here. The key is that the company essentially froze the conversion rate of Canadian currency to United States dollars (or the other way around… whichever you prefer).

Quarterly adjusted cash flow appears to have been running at a C$2 billion annual rate until the current quarter. Therefore, that debt load is likely to prove conservative now that commodity prices are rallying.

Offsetting the higher operating costs are some unusual finding and development costs. 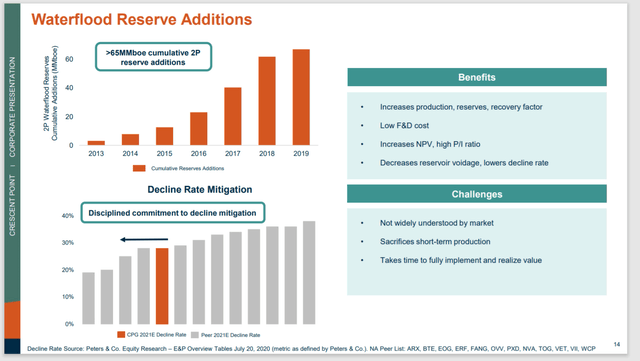 The secondary recovery costs are higher. But they are not as high as those for some high-cost operators like Denbury Resources (DEN). This enables other costs to offset the operating costs. In this case, the finding and development costs help to get total costs within competitive boundaries.

Now, the further benefits of a high percentage of production being oil as well as the known low decline rate of this kind of production means that a very competitive proposition has emerged. Had this not been case, the company would not have been able to reduce debt through various means at the speed shown in the slide before on debt.

Crescent Point, like so many energy companies, has been effective thrown into the garbage by Mr. Market. Yet, this company now trades at a fascinating bargain to the cash flow of the last fiscal year.

Even with the recent price rally, this issue trades at roughly an enterprise value around 2 times the cash flow of fiscal year 2019. Given that the second quarter of the current fiscal year is likely to be an outlier even in a very challenging year, the current stock price is still quite a bargain.

The common stock of this company may continue to rally as the price of oil firms and even increases. Generally, this is a very quiet company that does not do a lot of promotion. But the growth record is established during more reasonable times than the present. The locations are good enough that this company could be a takeover candidate.

Steady producers like this one are generally not easy to find at the current relative enterprise valuation. Once the market gets past the coronavirus demand destruction, investors will be unlikely to see these pricing levels in the future. This management has steadily delivered profits and production increases in the past. That record will likely continue in the future.

READ ALSO  Alcoa: Why I Am Passing On The 10% Free Cash Flow Yield (NYSE:AA)

There has been no impairment of future earnings power at the current time. Therefore, a wide variety of investors may want to consider this company for an investment. Note that in the past, the company has had a dividend. But like many Canadian companies, the dividend will be reduced sharply or eliminated when threatening industry conditions like the current conditions prevail. For an income investor that can assume the risk, future dividends based upon the current stock price could prove to be rewarding.

I analyze oil and gas companies like Crescent Point Energy and related companies in my service, Oil & Gas Value Research, where I look for undervalued names in the oil and gas space. I break down everything you need to know about these companies – the balance sheet, competitive position and development prospects. This article is an example of what I do. But for Oil & Gas Value Research members, they get it first and they get analysis on some companies that is not published on the free site. Interested? Sign up here for a free two-week trial.

Additional disclosure: Disclaimer: I am not an investment advisor (or a lawyer), and this article is not meant to be a recommendation of the purchase or sale of stock. Investors are advised to review all company documents, and press releases to see if the company fits their own investment qualifications.

Previous PostECB confident it can overcome challenges to create a digital euroNext PostNYTimes Admits WHO’s Decision Not To Close Borders At Start Of Pandemic Was Based On “Politics”, Not Science