Over much of the past year, I have discussed the potential of gold in the current environment. This is due to the fact that gold is a hedge against inflation, which is a very real possibility when we consider the unprecedented wave of government spending and money printing that has been unleashed in response to the COVID-19 pandemic. In addition, gold historically does well in times of fear and uncertainty, such as what we are seeing today. Unfortunately, one of the problems with gold is that it does not provide its owner with any sort of income that can be reinvested so investors are entirely dependent on capital appreciation. Fortunately though, there is a way around this. That is to purchase the Credit Suisse Gold Shares Covered Call ETN (GLDI), which will be the topic of the remainder of this report.

The Credit Suisse Gold Shares Covered Call ETN is an exchange-traded note that is designed to track the Credit Suisse Gold FLOWS 103 Index. This is an interesting index that essentially involves writing covered call options against the SPRDR Gold Trust ETF (GLD), which is an exchange-traded fund that tracks the price of gold. These call options are 3% out-of-the-money. The notes then pay out a monthly distribution to investors that historically is one of the highest yields available in the market. This is even more true in gold bull markets like the one that we are in now because option premiums tend to be fairly high in such markets. The notes currently have an annualized yield of 15.43%, which is certain to be appealing to anyone who is looking for income.

The fact that the notes basically generate this income by selling 3% out-of-the-money covered calls could make these notes somewhat less appealing to a gold bull. This is because of the way that covered calls work. In short, an investor is sacrificing any upside beyond the call premium. Thus, this strategy could end up underperforming gold if the price increases very rapidly. When we consider that the options are sold on a monthly basis, though, it would take a very rapid appreciation in gold for this to be a significant problem. What we are more likely to see here is very steady price appreciation due to the bull case for gold (as will be discussed shortly) while collecting a very attractive yield.

Another important thing to note here is that these are exchange-traded notes. This means that unlike an exchange-traded fund, there are no actual assets backing these securities. Rather, they are unsecured debt securities upon which Credit Suisse (CS) has simply promised to pay the holder an interest rate corresponding to the return of the index. This means that there is a certain amount of counterparty risk because if Credit Suisse runs into severe financial trouble, then it might default on the notes and leave its investors with nothing. With that said, Credit Suisse is the second-largest bank in Switzerland and has a very strong balance sheet, so this risk is likely minimal but it does still exist.

The Bull Case For Gold 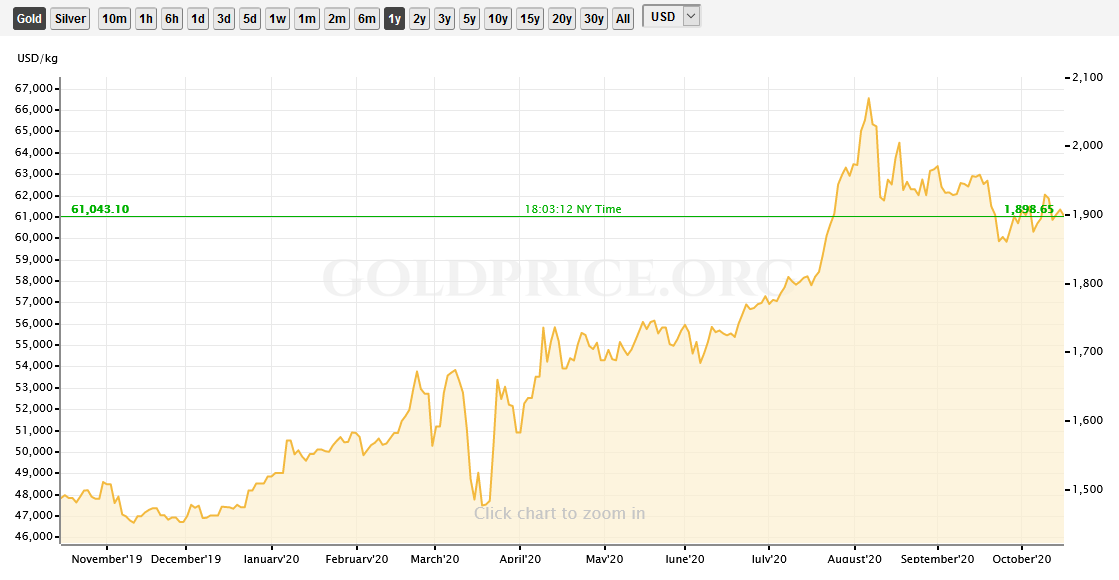 While this is certainly an impressive performance, we can see that it was even higher over the past few weeks and months. In fact, back in August, gold set a new all-time high of $2,070.50 per ounce. There are reasons to believe that this strong performance will continue going forward despite the disappointment over the past few weeks. One of the biggest reasons for this is the potential for inflation.

Most economists would define inflation as a general rise in price level relative to the available goods. It is generally considered to be a normal and unavoidable thing in any economy but this is only partially correct. Inflation is actually a result of the money supply increasing more rapidly than the production of goods and services in the economy. This scenario results in an increasing quantity of dollars (or whatever other currency is being considered) attempting to obtain the same limited supply of goods and services. The law of supply and demand says that in such a scenario prices will increase. This is in essence inflation.

The unprecedented response of the federal government and the central bank to combat the economic damage of the pandemic-related lockdowns has greatly increased the money supply. As I have pointed out in the past, Congress passed the largest spending bill in American history back in March. The Coronavirus Aid, Relief, and Economic Security Act had a price tag of more than $2 trillion and was paid for by the Federal Reserve, which printed new money to finance all of this spending. As this was done by the federal government creating new debt that was sold to the Federal Reserve, it caused the assets of the bank to surge. That is far from the only policy action that has led to an increasing money supply this year. In response to the steep fall in asset prices that occurred at the start of the crisis, the Federal Reserve started buying corporate bond funds. This was truly unprecedented as the bank never even did that during the 2008 subprime mortgage crisis. As was the case with the CARES Act, the Federal Reserve simply created new money out of thin air to finance this spending. As might be expected, these programs caused the assets of the central bank to surge:

READ ALSO  SE: U.S.-China Relationship Will Not Change Much in the Short Term under Biden, Baucus Says

As we can clearly see here, the Federal Reserve consistently had total assets (almost exclusively U.S. Treasury bonds) of $800 billion up until the second half of 2008. This is when it began its multiple rounds of quantitative easing to calm the markets and finance the stimulus spending of the United States government in response to the Great Recession. We can clearly see, though, that the spending this year has caused the Federal Reserve’s balance sheet to balloon much faster, nearly doubling this year. As might be expected, this has caused the money supply in the economy to surge, which was the basic point of all of these policy actions:

This only tells part of the story, however. As I pointed out earlier in this article, it is not solely an increase in the money supply that leads to inflation but the money supply increasing more rapidly than the supply of goods and services in the economy. That has unfortunately been the case. This chart shows the gross domestic product of the United States over the same time period:

As we can see, the money supply has increased by 112.69% over the past ten years but GDP has only grown 30.78%. This is the type of scenario that leads to inflation since it results in a growing amount of currency chasing after the same quantity of goods and services produced by the economy. Gold actually benefits from this, however. This is because gold cannot be created out of thin air like fiat currency can. Rather, it can only be produced through the hard labor of extracting it from deposits in the ground. Thus, gold will also see a growing quantity of currency chasing after the same limited supply of it, which should push up its price. This is likely the reason why gold prices have been run up so much this year.

Naturally, though, as investors, we are much more concerned with what an asset will do in the future rather than what it has done in the past. Therefore, the question that we should be asking is whether this trend of a growing money supply relative to the economy will continue. In all likelihood, it will. One piece of evidence to support this is the recent ongoing debate between Congress and the White House regarding a second stimulus package. While the size of this is still being debating, many officials are aiming for at least one trillion dollars or more. If this is implemented, the Federal Reserve will likely end up having to monetize this second package too, which will further increase the money supply.

The election is unlikely to change this trend either, regardless of who wins. The two presidential candidates are generally not planning to reduce spending. The reverse is actually true as we are hearing demands from both candidates for much higher levels of spending. This will undoubtedly lead to the Federal Reserve continuing to print money, which is overall bullish for gold. As the Credit Suisse Gold Shares Covered Call ETN tracks the price of gold (excluding the caps imposed by the calls), it should also see its price increase.

One thing that some investors might not like is that the notes do not pay a steady distribution. As we can see here, the distribution changes from month to month:

This varying distribution is because of the covered call strategy. As already mentioned, the distribution is determined by the premiums received from selling one-month 3% out-of-the-money call options against GLD. The premiums received for this is a number that is always changing depending on the market’s desire for these options. When gold is in a bull market, as it is today, the demand for these options is higher and so the premiums will be higher. Thus, the distributions paid by the notes will be higher. Thus, the notes could offer a good way to play a gold bull market, which seems likely to continue for quite a while.