Unlike Germany and Italy, Boris Johnson proclaimed on Tuesday, the UK was a “freedom-loving country” as he grappled with competing instincts about tackling the spread of coronavirus at the same time as protecting individual liberties and Britain’s economy.

“If you look at the history of this country over the last 300 years, virtually every advance from free speech to democracy has come from this country and it is very difficult to ask the British population uniformly to obey guidelines in the way that it is necessary,” the prime minister told MPs.

While some scientific critics argued the measures announced did not go far enough, others judged them as muddled, highlighting that they will last for six months and that the army may be deployed to help support the police.

“I think the public, rightly, are getting confused because the policies are changing so rapidly and we don’t know what’s behind the decision,” said Chaand Nagpaul, who chairs the ruling council of the British Medical Association.

Mr Johnson is once again walking a delicate line between combating the virus and safeguarding the UK’s fragile economic recovery. By opting to introduce a 10pm curfew for pubs and restaurants in England and asking people to work from home, the prime minister appeared to err towards the needs of businesses.

What are the new restrictions in England?

READ ALSO  Creditors Finally Wake Up To An Apocalyptic Reality: Bond Losses As High As 99%

One veteran libertarian was also scathing of the government’s plans, questioned why parliament was unable to debate the plans and argued the official advice should be made public.

“I’m not at all persuaded that they are using any respectable scientific evidence behind their decision. The quality of the decision making is absolutely appalling and I’ll be supporting Graham Brady’s amendment next week [which will force a parliamentary vote on future restrictions],” the MP said, referring to the influential chair of the Conservative 1922 committee.

On the introduction of the six person limit on social gatherings announced this month, another senior Tory said: “I have no idea where the rule of six comes from — the fact other nations [in the UK] said six shouldn’t include children indicates how dubious the science is.” This point was echoed by former health secretary Andrew Lansley, who said the rule was “for simplicity not its scientific rationale.”

Sticks but no carrots

Scientists said Mr Johnson’s measures would have some impact on the transmission of Covid-19 but few thought they were strong enough to lead to an actual decline in infections during the autumn, rather than slowing the increase.

“The question is whether or not these measures will in themselves be sufficient to reverse the increase in cases as we move into autumn,” said Paul Hunter, professor of medicine at the University of East Anglia. “It is doubtful that the measures currently being enacted will be sufficient to reduce the R value to below one much before this side of Christmas.” The R value, the average number of new cases generated by an infected individual, was estimated to be between 1.1 and 1.4 in the UK on September 18.

Linda Bauld, professor of public health at the University of Edinburgh, said the measures were “not as stringent as might have been expected”. 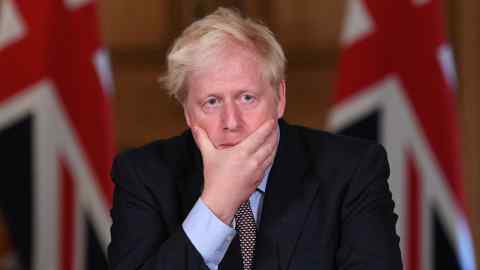 “What is worrying is that they will be accompanied by sticks but no carrots,” she added. “A punitive approach, if not accompanied by adequate [financial] support, risks further declines in public support for the UK government. It also risks rising levels of non-compliance.”

Several public health experts, such as Michael Head of the university of Southampton, predicted that the 10pm curfew would have little impact. “A far better approach would be to shut all pubs and restaurants and properly compensate businesses and employees for the loss of income,” he said. “This would ensure that public health is prioritised, and business and staff are in a stronger economic position when they are allowed to resume.”

Dr Nagpaul, meanwhile, said he worried that closing bars at 10pm would simply lead people to do their drinking more intensively earlier. “We may in fact have more people visiting bars, pubs and restaurants in a shorter timescale,” he added.

If the latest restrictions do not halt the spread of the virus, Mr Johnson warned that the government would “deploy greater firepower with significantly greater restrictions” — although he “fervently” hoped to avoid doing so.

One Whitehall official said further nationwide measures were not the government’s focus. “We are in a very different place to earlier in the year. Our focus is to be more targeted and focus on the local measures, with the priority being to keep the virus suppressed, protect the economy and education until a vaccine or mass testing is available.”

Yet if this fails to control the spread of the virus, ministers expect that England will follow Scotland — as well as the existing regional lockdowns — by introducing restrictions on socialising between households. “That’s the obvious next step if we need to,” said one member of the government.

Ian Boyd, a professor of biology at the University of St Andrews and a contributor to Sage, the government’s scientific advisory group, warned that a “circuit-breaker” full lockdown might still be necessary, possibly with no end date. “Two weeks is sensible because it’s the minimum period needed in order to know whether the measures are effective. If they are not then more time will be needed.”