COVID-19 Will Be A Stagflationary Shock, Stay Long USD In The Short Term

The global economy was already declining before COVID-19

The past two years were marked by a constant slowdown in the business cycle after the global economy peaked in the last quarter of 2017. The rise of uncertainty globally, with Brexit at first and quickly followed by the US-China trade war and political risk in the euro area (France’s yellow vest, Italian elections…), generated a rising demand for the traditional safe-haven assets: US Treasuries and the US dollar. We previously saw that the rise in uncertainty has historically been associated with a stronger USD (figure 1, left frame). Even though global growth has constantly been weakening in the past two years, the market did not react and the 20-percent drawdown we saw in the end of 2018 was followed by a sharp recovery in 2019 due to the significant increase in global liquidity.

However, we do not feel very optimistic in the near to medium term despite the massive liquidity injections from the Fed and other major central banks. In previous downturns, equities have usually fallen for a longer-than-anticipated period despite an increase in liquidity. Indeed, rising excess liquidity tends to usually lead risky assets such as equities (by 6 months), but the relationship breaks down during recessions. We do think that COVID-19 will mark the divergence between excess liquidity and global stocks (figure 1, right frame).

More bearish than bullish for now

Two narratives are currently making the headlines: the first one is optimistic and predicts that the economy will be back on track by early June and that the ZIRP policies combined with depressed oil prices will generate a significant push in consumption in most of the developed countries, leading to a sharp recovery in the second half of 2020. The second narrative is more pessimistic: unemployment skyrockets around the world, creating a huge demand shock leading to social unrests in most of the countries.

It is clear for us that economies will have to temporally deal with massive unemployment, and then the question of social unrests will depend on how well governments will manage the global crisis (helicopter money, MMT…). There is no way that the economy will recover sharply in the second half of this year as social distancing will be implemented in a lot of countries at least in the beginning. It is currently fair to assume that the uncertainty of employees’ working status has never been higher than today; therefore, how could we expect consumption to recover sharply in H2 2020 when household net wealth and real disposable income, two important drivers of real consumption, are falling?

The reality is that households will save carefully in the coming months and consumption will remain depressed for a little while. As a result, it is hard to believe that we will see a sustained period of rising equities while consumption keeps deteriorating.

Hence, as we are heading towards a tough 18-month outlook, the buyers on dip should remain vigilant in the near to medium term. Figure 2 shows how Japanese investors would have performed poorly in the 1990s if they were rushing to buy the dip each time the market corrected. 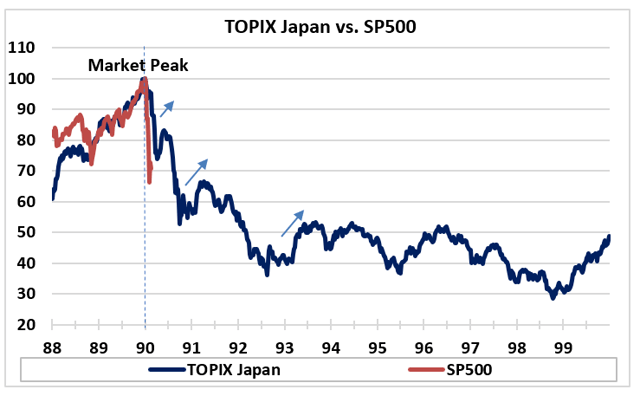 ‘This time is different’: we expect a stagflationary shock

To the difference of the 2008 Financial Crisis, the COVID-19 is a supply shock that will spill over demand in the coming months; as a result, these aggressive measures from governments will lead to more money in the system chasing fewer goods and could therefore generate an unexpected increase in inflation. We believe that COVID-19 will be stagflationary rather than deflationary and governments may have to eventually intervene to limit the appreciation of certain goods.

However, we agree that the services industry will suffer in the medium term as households’ spending will be significantly reduced in the coming months. For instance, as Variant Perception precisely mentioned in their latest report entitled ‘Recession and Shocks,’ it takes up to 16 months for employment in the hospitality and leisure industry to recover after an exogenous shock (figure 3, left frame). It may take even longer to recover this time due to social distancing; does it mean that restaurants will be forced to reduce the amount of tables for the first few months after the activity starts again? What about pubs?

Figure 3 (right frame) shows the performance of global food (retail & distribution) stocks relative to leisure stocks and clearly highlights the devastating effects of COVID-19 on certain industries or sectors. It indicates that investors will have to be very picky regarding the stocks they chose in the coming months as buying aggregate indexes will not be a profitable strategy as it has been in the past decade.

Historically, flat or falling growth combined with rising inflation has been the worst outcome for stocks (to the exception of few industries such as tobacco, food producers or healthcare). Therefore, we think that gold will perform well during that period and that the precious metal could trade at new all-time highs (in USD terms) in the coming months.

Even though we are bullish on gold in the medium to long run as the ultimate hedge against rising money supply and equity selloffs, we expect the US dollar to appreciate against most of the currencies in the near term. Even though numerous drivers are pointing towards a lower greenback in the short run (higher reserves held at the Fed, recovery in cross currency basis swaps indicating less concerns on the global USD shortage narrative, lower US yields), we do think that the USD will outperform most of the DM and EM currencies as long as price volatility remains high.

Figure 4 shows that most of G10 currencies perform poorly when VIX is high (VIX > 20), to the exception of the two other ultimate safe havens: the Swiss franc and the Japanese yen. We also think that any bull bounce in markets could be seen as an opportunity to buy the yen against traditional crosses such as GBP, EUR or AUD. 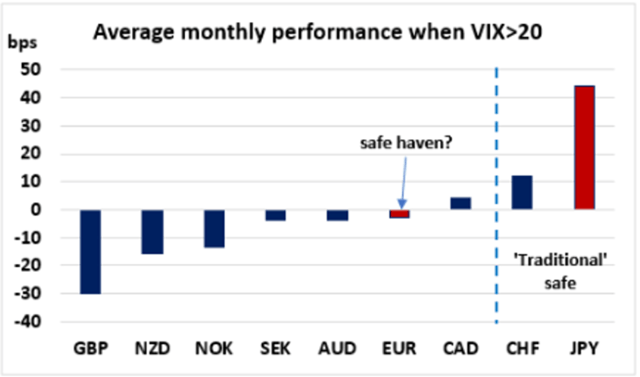 Disclosure: I/we have no positions in any stocks mentioned, but may initiate a long position in USD over the next 72 hours. I wrote this article myself, and it expresses my own opinions. I am not receiving compensation for it (other than from Seeking Alpha). I have no business relationship with any company whose stock is mentioned in this article.