COVID-19 Vaccine Race Heats Up: Moderna Faces Off Against Pfizer And BioNTech (NASDAQ:BNTX)

There have been a few developments since I last wrote about the front-runners in the COVID-19 vaccine race; BioNTech SE (BNTX) and Pfizer (PFE), Moderna (MRNA), and AstraZeneca (AZN) and Oxford. This article takes a look at recent progress as we near a readout from these studies.

Beginning with PFE & BNTX, the companies announced on September 12 that they were increasing enrolment of their late-stage study to about 44,000, up from an initial target enrolment of 30,000. There was some speculation regarding the reasons for this increase, a major theory is that the rate of COVID-19 infections is below expectations, meaning more subjects might need to be enrolled to show a difference between placebo and the vaccine. This wouldn’t mean the vaccine is weaker than expected, just that participants in the trial, in both arms, are getting COVID-19 at a lesser rate than expected.

According to the September 12 press release, PFE is confident of producing efficacy results by the end of October, meaning we are about 30 days away from an answer as to whether or not the world has a vaccine for COVID-19. In an August 20 press release, PFE was guiding for regulatory review as early as October, so an update on guidance to efficacy data by the end of October indicates a delay. That being said, due to PFE’s delay, could MRNA or AZN/Oxford produce results sooner?

Looking at the recent rate of enrolment for PFE/BNTX’s COVID-19 vaccine trial, the company had enrolled 29,012 patients as of September 15, and by September 28, had enrolled 35,469. An enrolment rate of approximately 3,200 per week. At that rate then, PFE would be about 2.6 weeks from completing enrolment as of September 28. This gives us a potential date of approximately October 16 for the completion of enrolment. The obvious caveat is that enrolment rates could vary, but either way, PFE is within a few weeks of completing enrolment.

Much like PFE/BNTX and AZN, MRNA has encountered its own delays. The company has had to slow enrolment of its trial to make sure minorities were adequately represented. Still, the trial had nearly completed enrolment as of September 25, with 27,232 participants enrolled, 15,454 of whom had received a second shot. That 27,232 number was up just 1,256 patients from a number of 25,976 supplied a week earlier on September 18. At that rate, it will still take 2.2 weeks to reach the target enrolment of 30,000. As such, MRNA appears to be on track for completion of enrolment as of October 10. Again, enrolment rates can vary and indeed have been varying for MRNA.

It should be noted that PFE/BNTX’s study has the advantage of looking at events just seven days after the second dose of vaccine and dosing participants with the second shot after just 21 days. MRNA is dosing participants a second time after 28 days and looking at events after 14 days, so PFE has an intrinsic two-week advantage based on that trial design.

During a CNBC interview, MRNA CEO, Stephane Bancel, noted that sufficient data to determine if mRNA-1273 works might be available by October, but more likely by November. Bancel acknowledged further that a drop in infection rate could push that timeline out to December.

While I’ve discussed a race to complete enrolment between PFE/BNTX and MRNA, both companies have made protocols available that discuss, in detail, planned interim analyses. Of note is the fact that PFE/BNTX will conduct four interim analyses at 32, 62, 92, and 120 events with a final analysis at 164 events. Analytics firm, Airfinity, speculated that 32 events could pass/have passed as soon as September 27.

Table 1: Table 5 from PFE protocol of the phase 2/3 study of BNT162b2. Note that if an interim analysis of the first 32 cases has already passed, the vaccine would need to have been at least effective enough to produce a split of the 32 cases such that only 6 were in the vaccine group and 26 were in the placebo group. This is well above the efficacy of 50% required for approval by the FDA. Source: PFE protocol.

Note that futility (trial stopping due to lack of efficacy) is an option at the first three tests in PFE/BNTX’s trial.

By comparison, MRNA will conduct two interim analyses at 53 and 106 events, with a final analysis at 151 events.

Table 2: Table 13 from MRNA protocol of phase 3 COVE study of mRNA-1273. Note there is no discussion of futility boundaries. Source: MRNA protocol. 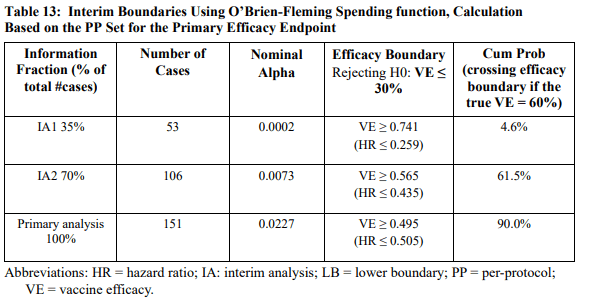 With AZN and Oxford University, there has been a potential toxicity issue with an apparent case of transverse myelitis occurring which led to a halt in enrolment. Enrolment in a 30,000 patient study in the US appears to be on hold, while enrolment in the UK and Brazil has resumed. As such, AZN appears to be out of the race for the first to complete enrolment of a large trial in the US, leaving MRNA and PFE/BNTX to face off.

Despite a delay for PFE, triggered by an increase in enrolment, the company should still complete enrolment at a similar time to MRNA, in mid-October. The first to declare a result might come down to interim analyses, which adds additional difficulty in saying which name might produce a result first. PFE still retains the intrinsic advantage of dosing patients a second time after three weeks, not four, and looking at cases/events at one week, not two. That might give PFE an advantage in terms of reaching enough events to declare a result, but unfortunately, we can’t assume the efficacy of the two vaccines would be the same, even if they have similarities in the technology behind them. Further, we can’t even assume the vaccines work, but of course, everyone is hoping they do.

Investing isn’t about hope. Holders of PFE/BNTX or MRNA need to consider they might be beaten to the punch by the other. It is unclear what that would even mean for the stock of each company. Success for PFE/BNTX might in fact cause MRNA to trade up, as it could be considered validation of an RNA vaccine and show that making a working vaccine for COVID-19 is indeed possible. By that reasoning, might MRNA sell off if PFE/BNTX declares failure? These are the questions investors and traders should be asking, among others. I predict PFE/BNTX will succeed and MRNA will trade up slightly in response, but that is just my opinion.