Coronavirus is expected to dominate the first and only vice-presidential debate between Mike Pence and Kamala Harris, which will take place on Wednesday night despite the outbreak of the disease in the White House.

With less than four weeks until election day, the incumbent Republican vice-president and Democratic challenger will stand 12 feet apart behind Plexiglas shields during a 90-minute debate at the University of Utah in Salt Lake City.

The debate will go ahead despite concerns about the spread of Covid-19 in the White House after US president Donald Trump tested positive for the virus just two days after debating Joe Biden last week.

Mr Trump, who was hospitalised at the weekend but returned to the White House on Monday evening, has attracted criticism for not taking precautions to prevent his infection and for playing down the severity of the disease since his diagnosis. More than 200,000 Americans have died from the virus.

On Wednesday night, join Swamp Notes columnists Ed Luce and Rana Foroohar, along with US Managing Editor Peter Spiegel, for a night of real-time commentary and shrewd analysis. On the homepage from 7pm ET.

The Trump and Biden campaigns said Mr Pence and Ms Harris were regularly tested for Covid-19, and would enter Wednesday night’s debate with a clean bill of health.

But Ms Harris, the Democratic senator from California, is nevertheless expected to attack Mr Pence, who chairs the White House coronavirus task force, for the Trump administration’s handling of the pandemic.

“Mike Pence has completely abdicated his responsibilities as head of the White House coronavirus task force,” Symone Sanders, senior adviser to the Biden campaign, said on Wednesday. “Mike Pence stood by as Donald Trump, the president of the United States of America, encouraged Americans to inject bleach.”

Mr Pence is expected to defend the administration’s record on Covid-19, as well as economic and social issues, and present a more moderate image of the White House.

The Trump campaign is facing an uphill battle heading into election day, with Mr Biden leading in all big national polls as well as most surveys of key battleground states. 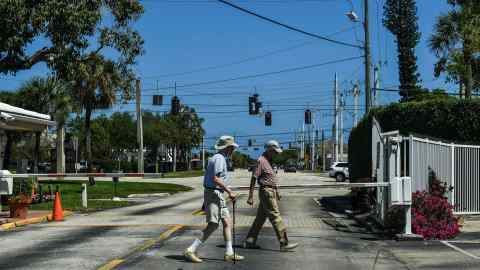 Mr Trump’s handling of his illness has caused alarm in Washington and within the White House, after many members of his top team tested positive for Covid-19, including Bill Stepien, his campaign manager; Kayleigh McEnany, press secretary; and Stephen Miller, senior adviser.

Multiple Republican senators have also tested positive for the virus, leading to concerns on Capitol Hill among lawmakers, aides, journalists and service workers.

In a memo released by the White House on Wednesday morning, Sean Conley, the president’s physician, said Mr Trump “feels great” and had been symptom-free for over 24 hours.

Dr Conley also said that Mr Trump had tested positive for antibodies that are thought to protect those who have contracted the disease from becoming infected in the future. However, that could be because he has taken an experimental antibody treatment, according to Regeneron, the drugmaker developing the therapy.

Tens of millions of Americans are expected to tune in to the debate, which will air across all main networks starting at 9pm eastern time.

The vice-presidential debate four years ago between Mr Pence and Hillary Clinton’s running mate, Tim Kaine, attracted an estimated 37.2m viewers, according to Nielsen. The debate will be moderated by Susan Page, a veteran reporter and current Washington bureau chief for USA Today.