COVID-19 Bailouts, Bailouts and More Bailouts: How They Are Very Different From the 2008 Financial Crisis Bailouts 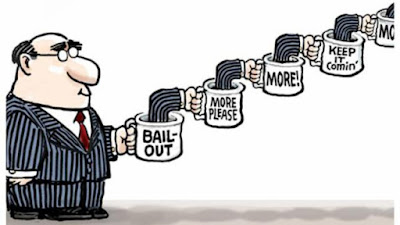 The current economic crisis related to COVID-19 is much different from the 2008 financial crisis.

As I explained in yesterday’s EPJ Daily Alert, much of the 2008 financial crisis-related bailouts were just paper shuffles. The Fed bought mortgage-backed securities that it put on its balance sheet and the banks, in turn, were given Fed reserves, a good chunk of which they kept at the Fed as excess reserves ($2.7 trillion at peak) and the money never hit the economy.

There were minor other parts of the bailout but the key factor was the bailout of the banks in the paper shuffle.

The current crisis is different.  The bailouts are hitting the real economy. It is not a paper shuffle. There is going to be billions (trillions?) of new money hitting the economy.

The Trump administration said it backs a plan to send $1,000 checks directly to every adult American. This money is going to hit the economy, it is not going to end up back at the Fed as excess reserves. It is going to be spent and put into the system bidding up prices.

Further, at present, a slew of industries are asking for various forms of bailouts:

It remains to be seen what the structure of these bailouts will look like but, to the degree they are not a debt for some other kind of debt swap (paper shuffle) and rather funding for operating expenses, it will be more money pumped into the system (NOTE: It will be a Fed money pump since I expect the Fed to monetize a large amount bailout of these bailout activities.)

In addition to this, the Administration is muscling various agencies to tear down regulations that hamper banks from more aggressive loan making. Not to mention, the Fed is encouraging banks to borrow from the discount window, has lowered key rates to just above zero, and has lowered the reserve requirement to zero.

If you aren’t a boomer (or older), you haven’t seen the type of price inflation that is coming on the other side of this current COVID-19 panic.

Previous PostUSA and all of Europe will look like Italy within one month!Next PostAsia stocks follow US higher after coronavirus support measures