Coupa (COUP) at this point seems unbeatable. The software company best known as wanting to be the Amazon (AMZN) of B2B purchases has just turned in its first-quarter results and surprised the Street by how unaffected its business was by the global pandemic. Not only has Coupa been outperforming the broader market all year (right now, Coupa is up ~50% year-to-date while the S&P 500 is a few points short of flat), but the stock is also grinding toward new all-time highs.

At the low point of the market this year, I called for caution on Coupa based on the following two reasons:

Coupa’s Q1 results and confident guidance outlook for the remainder of FY21 seems to have taken care of the first concern – however, valuation remains the thorn in Coupa’s side. To that end, I think it’s fair to revise my view on Coupa to neutral. There can be no doubt that Coupa has proven itself as a brilliant, heavily-used product in a procurement field that was ripe for disruption (though we note that SAP’s Ariba has been in the game for longer than Coupa, and is still larger). Investors like Coupa’s story so much that at the moment, valuation seems to not be the foremost concern.

I am worried, however, that a stock that’s trading at a higher multiple of revenues than the broader market is as a multiple of GAAP earnings is literally priced for perfection. Valuation eventually gives every stock its glass ceiling, and so I find it will be challenging for Coupa to continue rising substantially beyond this point.

A quick valuation check: at Coupa’s current share prices near $230, the stock carries a market cap of $15.37 billion. After we net off the $705.9 million of cash and $686.1 million of convertible debt on Coupa’s latest balance sheet, we’re left with an enterprise value of $15.35 billion.

For the current year, meanwhile, Coupa has revised its guidance as follows: 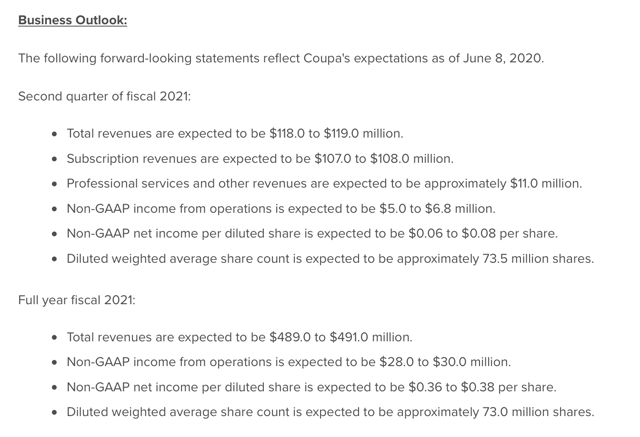 The $489-$491 million revenue range represents 25-26% y/y growth over FY20 revenues of $389.7 million, which is slightly ahead of consensus expectations of $489.2 million (+25% y/y) and marginally higher than the company’s prior guidance of $488-$490 million. The fact that Coupa is providing any guidance at all for the current year is an indication of the company’s good revenue visibility, whereas most other software companies have withdrawn their full-year outlooks (and some even their current-quarter outlooks).

Versus the midpoint of this range, Coupa trades at 31.3x EV/FY21 revenues – again, a steeper multiple of revenues than the S&P 500 is trading at as a multiple of earnings. Furthermore, Coupa trades far above where most other SaaS companies that are expected to grow in the ~30% range this year are currently trading:

Based on comps, a mid-teens multiple appears to be more appropriate for Coupa, and Coupa has shot far past that mark. Having Coupa gravitate down to its peer multiples would imply cutting the stock price in half.

This being said, it’s important to acknowledge the strengths in Coupa’s most recent results. Take a look at the earnings summary below: 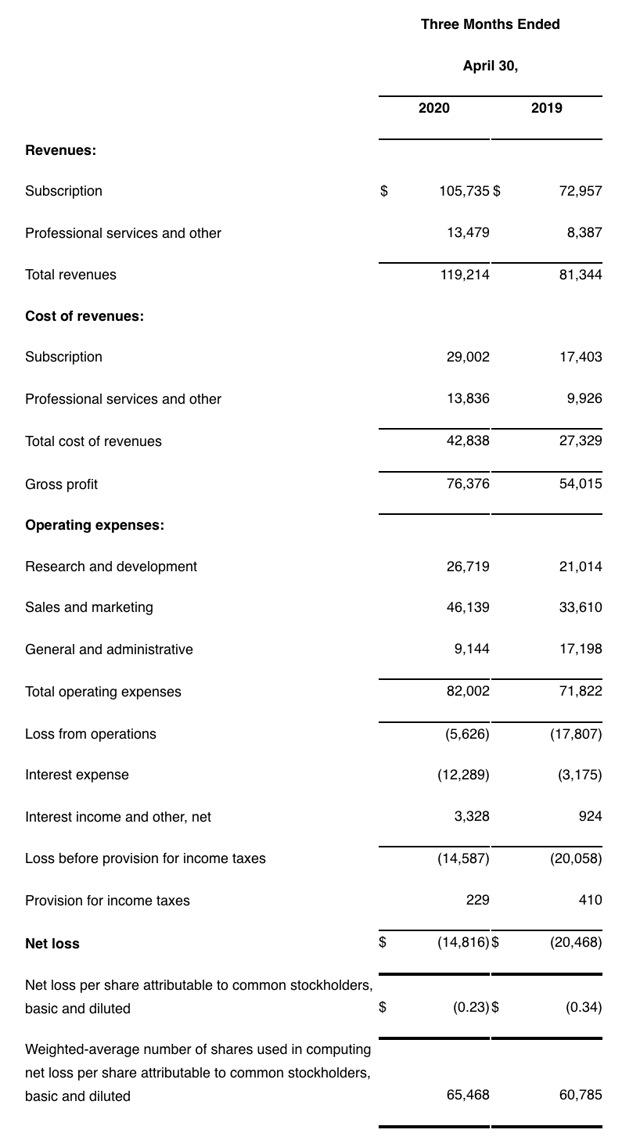 Most impressive of all is the fact that Coupa’s revenues still grew at 47% y/y to $119.2 million, decelerating only one point from last quarter’s 48% y/y growth – and we note that Q1 contained two months that are arguably the hardest-hit by the pandemic, March and April. Wall Street, meanwhile, had only expected $111.8 million in revenue (+38% y/y).

Todd Ford, Coupa’s CFO, noted that in spite of macro challenges, Coupa has entered the second fiscal quarter with a healthier pipeline than ever. Per his prepared remarks on the Q1 earnings call:

With respect to guidance in particular, our current operating thesis is that the macroeconomic environment will remain challenging for at least Q2 and Q3 with things beginning to open up more broadly in Q4.

We entered Q2 with a stronger pipeline than the same time last year, both on a gross basis and in terms of what we would consider to be later stage qualified pipeline. Not surprisingly, many of our customers and prospects are now operating with significant headwinds, especially those in industries highly affected by the pandemic, making it difficult to predict the timing of when deals will close.

There were very few remarks on higher churn, lower B2B spend on the platform, or anything of the like – which is the major reason shares of Coupa continued to rally post-earnings, when most of the Street was prepared to hear some bearish commentary.

But another key reason that Coupa has been able to win investors’ favor is the fact that the company continues to grow its operating leverage. Helped by a 100bps rise in pro forma gross margins and continued efficiencies on the sales and marketing side, Coupa grew pro forma operating margins by five points to 10%, as shown in the chart below: 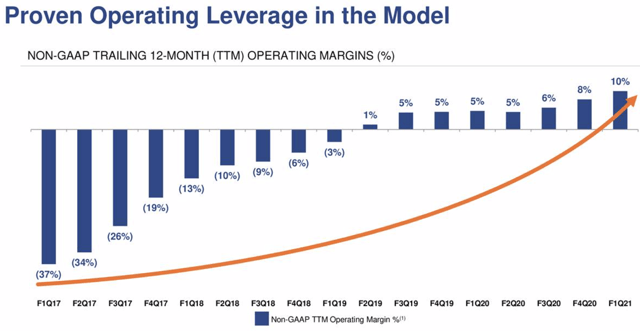 Coupa also emphasized the fact that it scores exceedingly well against the commonly-used (but often variably defined – Coupa uses adjusted FCF margins in place of operating margins) “Rule of 40”. In FY20, Coupa generated 50% y/y revenue growth and 14% adjusted FCF margins, earning the company a score of 64. 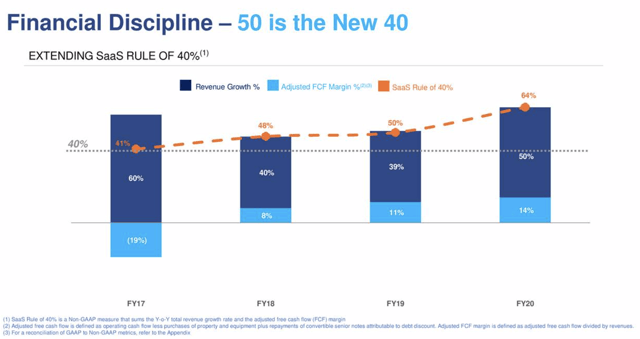 Even this year, amid an expected slowdown in revenue to 26% y/y growth in FY21, Coupa will still achieve an above-40 score if the company can hold onto its 14% FCF margin from the prior year. (In reality, we also think growth will clock in higher – if Q1 came in at 47% y/y even despite the impact of the pandemic, Coupa’s full-year growth will likely come in stronger than just 26% y/y).

It’s obvious that Coupa is such a richly valued stock because it delivers such strong fundamentals, on both the top and bottom line. The company is also a clear category leader in a huge market. Betting against this stock has been a difficult play, but I also find it unrealistic for investors to hope that Coupa can rise much higher when it’s one of the few software stocks that trade above >30x forward revenues. I’d prefer to remain on the sidelines here.

I’m launching The Daily Tech Download, a Seeking Alpha Marketplace service, on June 22. Subscribers will get access to a daily comps sheet tracking valuation changes in the tech sector and access to exclusive ideas. Stay tuned and contact me for more information.