An investment case rests on a successful turnaround with the following elements: 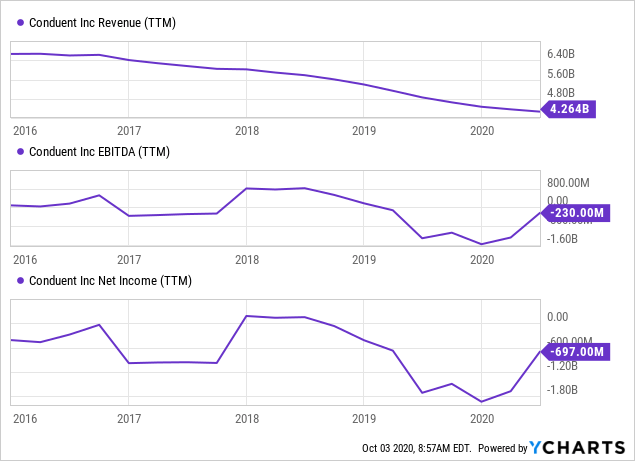 Indeed, since the spin-off from Xerox (NYSE:XRX) in 2017, the company hasn’t actually been able to grow revenues, quite the contrary, and SA contributor The Alpha Sieve succinctly sums up the reasons for the underperformance:

But, from a point of potential turnaround, it has a lot of potential, both in terms of growing revenues again and in terms of operational improvements, which have already started. Here is the transformation plan (earnings deck): 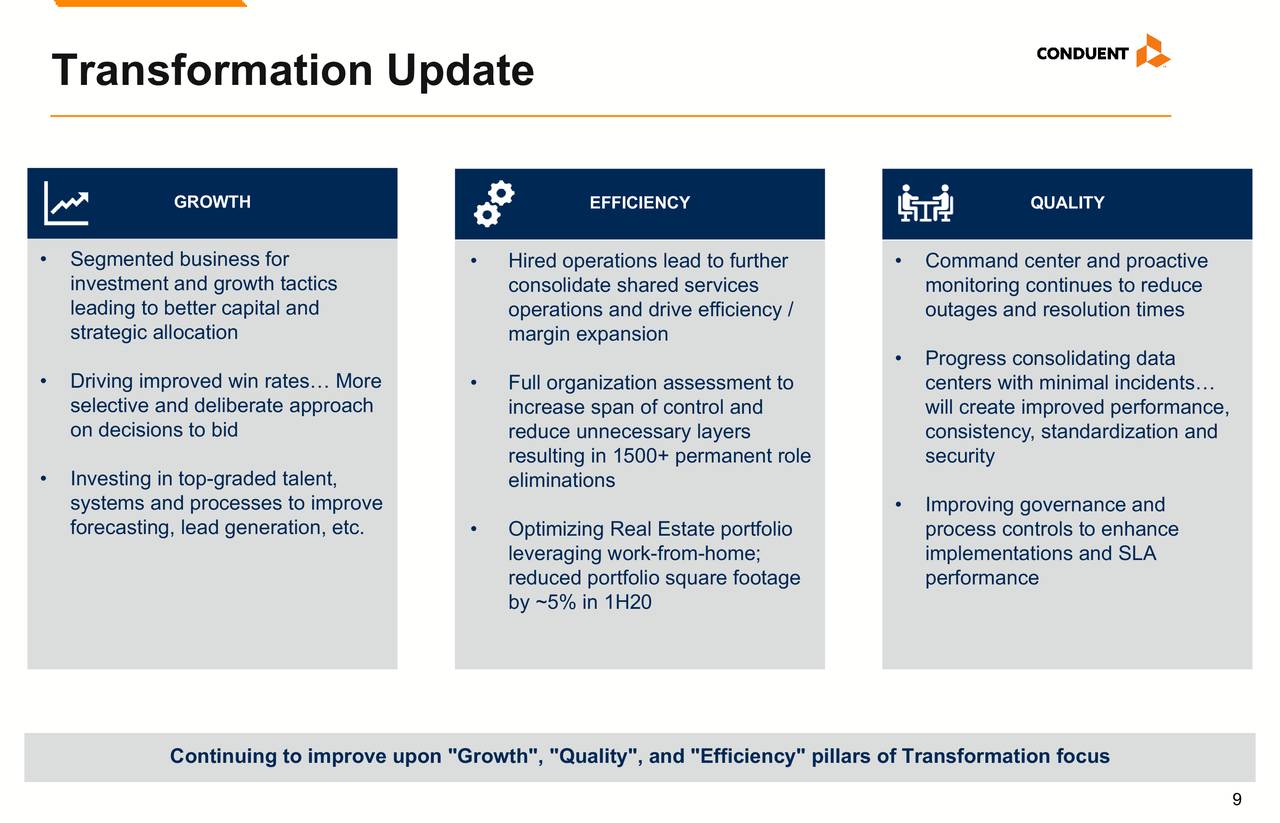 key initiatives include standardizing processes and the operating model, trimming the cost base, consolidating real estate & data centers, revamping the IT infrastructure, moving away from commoditized offerings to SaaS-based offerings (Software as a Service), centralizing the sales functions, hiring a chief revenue officer, and launching a client retention program.

Growth seems to be working, with the company raking in $623M of new business (or roughly $600M if one strips out the COVID-19-related P-SNAP business). From the earnings deck: 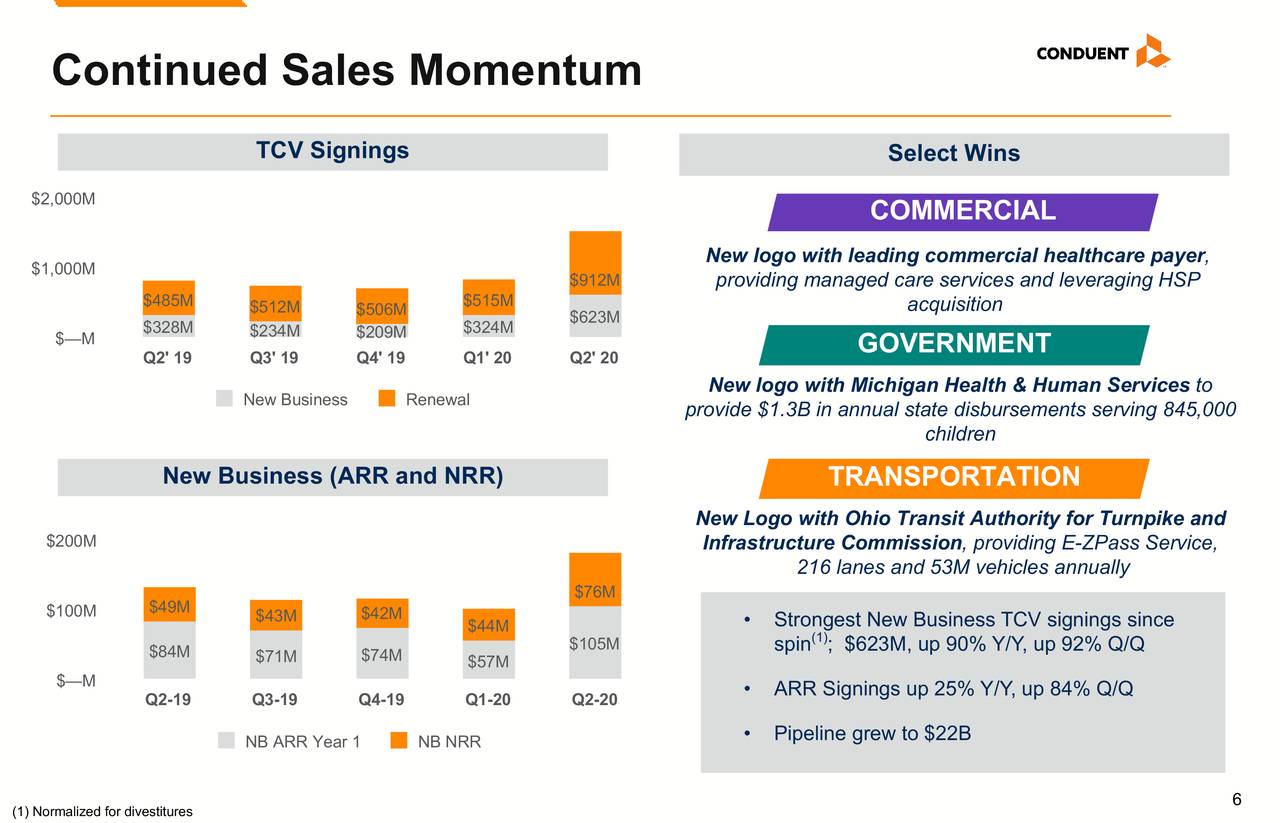 Management ascribes this to a revamped sales process (Q2CC):

It’s a lot more about process improvement, dedicated teams, upgrading talent, the governance, bid management and certainly leadership. And so it’s a changed sales environment. We are bidding on things we think we have good shot at and we are not messing around with others. With respect to tenure of the deals in that $623 million, it is up, driving the TCV up. So we are looking at roughly 5.2 year average deal length versus in previous quarters in the neighborhood of high threes, into the fours.

The impact of that will come (Q2CC):

we are up on quarter-over-quarter, we are 25% or on ARR and in some cases up, upwards of 83% above what we were last year. So not only is the TCV up, but the annual recurring revenue is up and the deal length is up.

Management argued that, with new deals, they are looking at deals that produce a higher margin than their existing business, with some exceptions. However, these will not manifest themselves in the first year as there is a ramping-up effect; margins can even be negative in the first year.

The company is also achieving more on the cost-cutting side than the $100M originally budgeted, from the earnings deck: 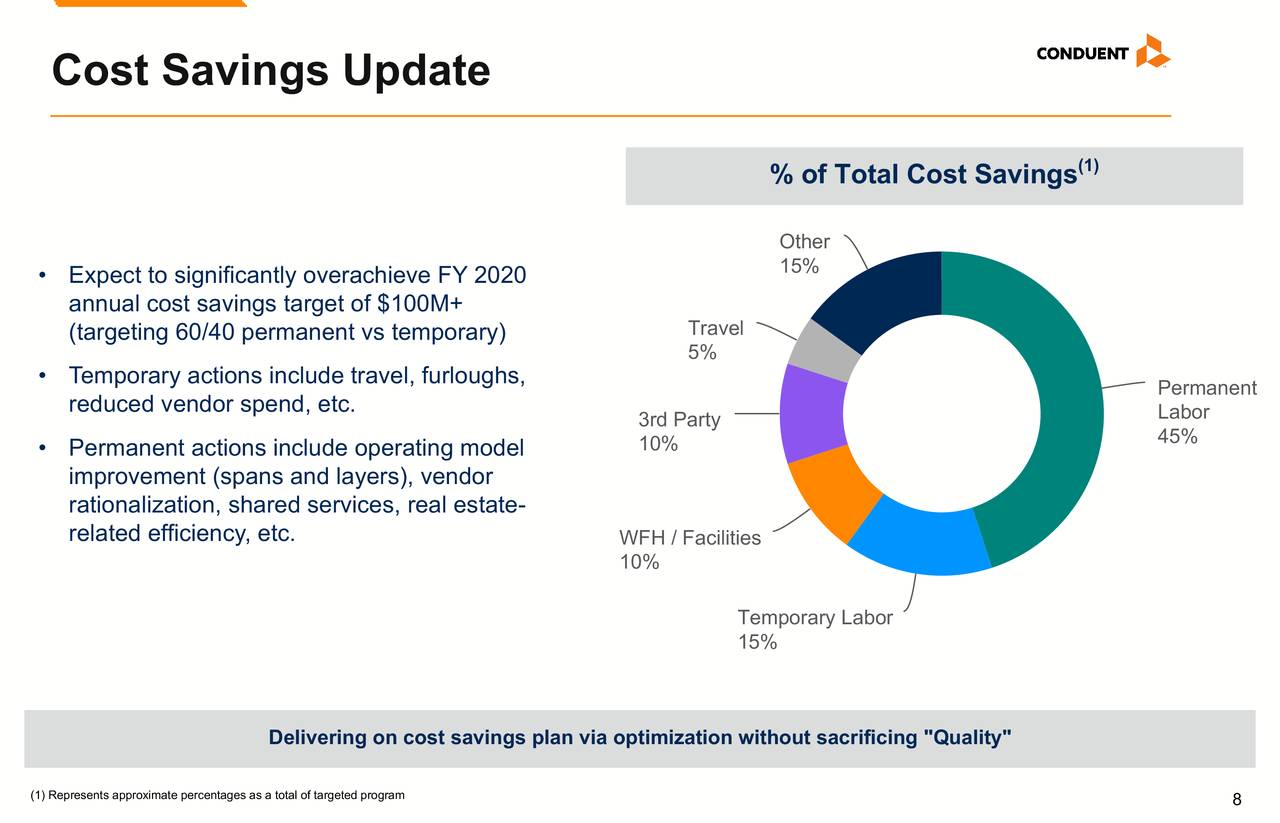 There is a temporary and permanent aspect to that with roughly 40% of cost cutting being temporary and related to the pandemic. Management expects this to overachieve the $100M in the neighborhood of 20% to 40% this year.

They are already some 70%-80% into the execution here, so we should see a considerable impact this year in the cost structure.

In previous cost exercises, management has cut into the bone, and this has affected revenue growth, so in order to avoid the same mistake, they take a different angle (Q2CC):

We looked at it from operating model changes, spans and controls, areas where we just don’t think we have an opportunity to grow and areas where we can combine talent and create more shared services to drive, what I would call, efficiency plays that will then along with automation that will drive some of those reductions. And it’s obviously not just people. But it will involve people as well.

Another reason not to fear that is that the company is actually hiring new sales people and is about 25% over the low point last year in terms of sales headcount, and they are expecting another 10%-20% uptick in the next nine months or so.

One should also keep in mind that the cost cutting efforts will, to some effect, remain hidden in the figures as they are in part overshadowed by the ramping effect of the new contract wins (new projects can even produce negative margins in their first year).

Given the somewhat higher margin profile of the new contracts and the overshooting of the cost cutting target, we can expect adjusted EBITDA margin to increase, but the additional investment in growth will keep it in the 10.5%-11.5% range for a couple of years, according to management. 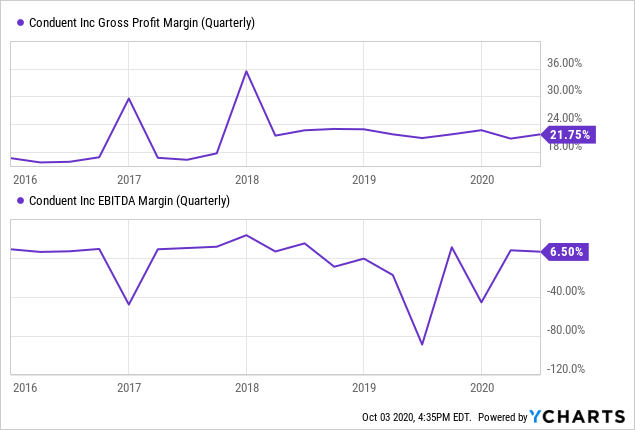 The above EBITDA margin is in GAAP and obviously lower. Management sees no reason why the company wouldn’t be able to reach 15% adjusted EBITDA margin that competitors manage longer term. Here is some further info on segment margins, from the earnings deck: 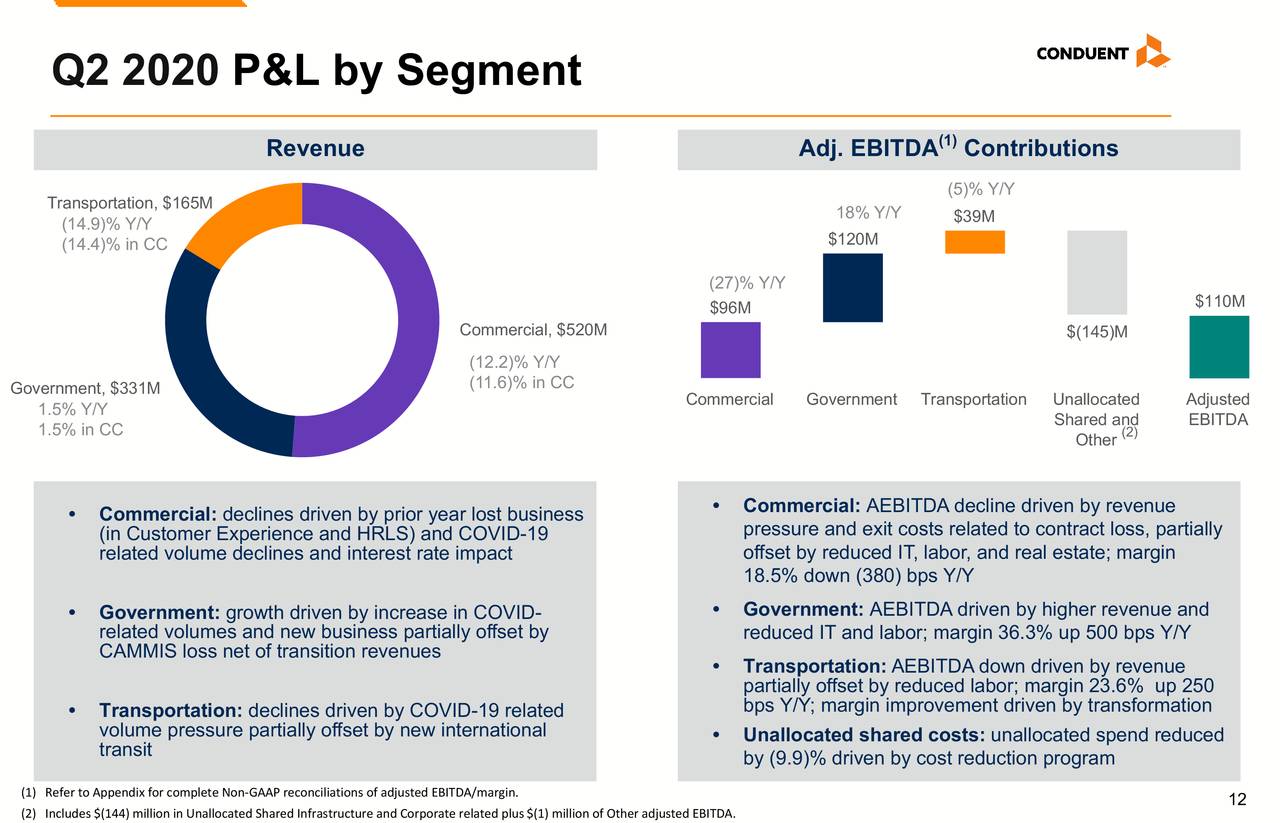 The COVID-19 impact is neatly summarized in a slide from the earnings deck: 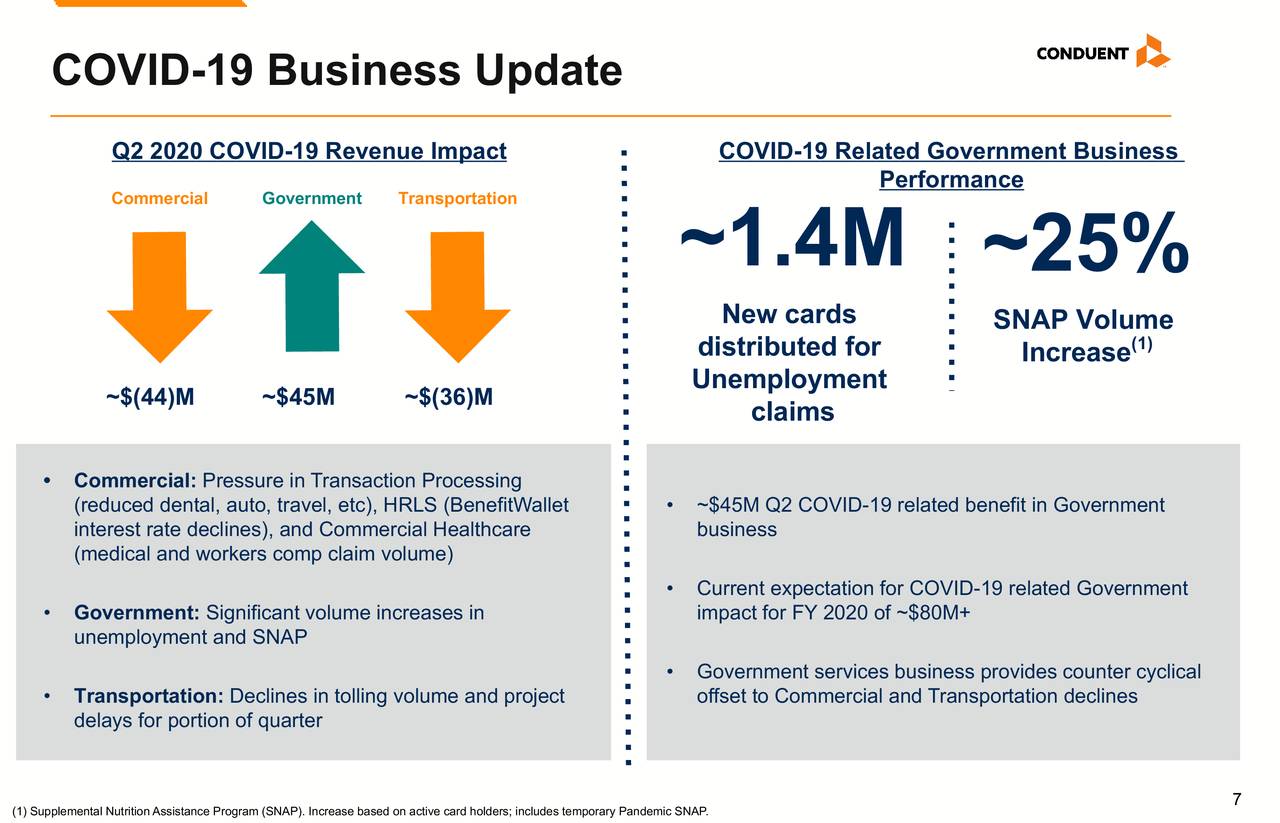 All in all, the decline in transportation was less than feared, while the surge in government segment was larger than expected. The total impact on revenue was roughly $35 negative in Q2.

Without that impact, the Q2 revenue decline would have been 5.5%, less than the 6%-8% guided at the beginning of the year.

The pandemic is likely to have boosted margins a little as the government segment tends to gather considerably higher margins compared to the other two segments.

The Q2 results came in much stronger than expected:

Here are the results per segment (earnings deck):

The results of the commercial segment were particularly bad (Q2CC):

our commercial business revenue declined 12.2%, driven primarily by prior year lost business, COVID-19 related volume declines and the interest rate impact of the BenefitWallet business. Adjusted EBITDA was down 27.3% while adjusted EBITDA margin of 18.5% was down 380 basis points year-over-year.

At the low-end to midpoint, this isn’t including any extension of Federal government unemployment supplement. At the high-end, it does include extension into August and September (which is obviously not the case, given that there is still no new fiscal package agreed in Congress).

In a recent update (September 10), management argued that they expect revenue and adjusted EBITDA to come in at or above mid-point and that the company is on track to meet or exceed its full year target 60% improvement in new y/y business signings.

Management is refraining from FY2020 guidance. Here are some further metrics, from the earnings deck: 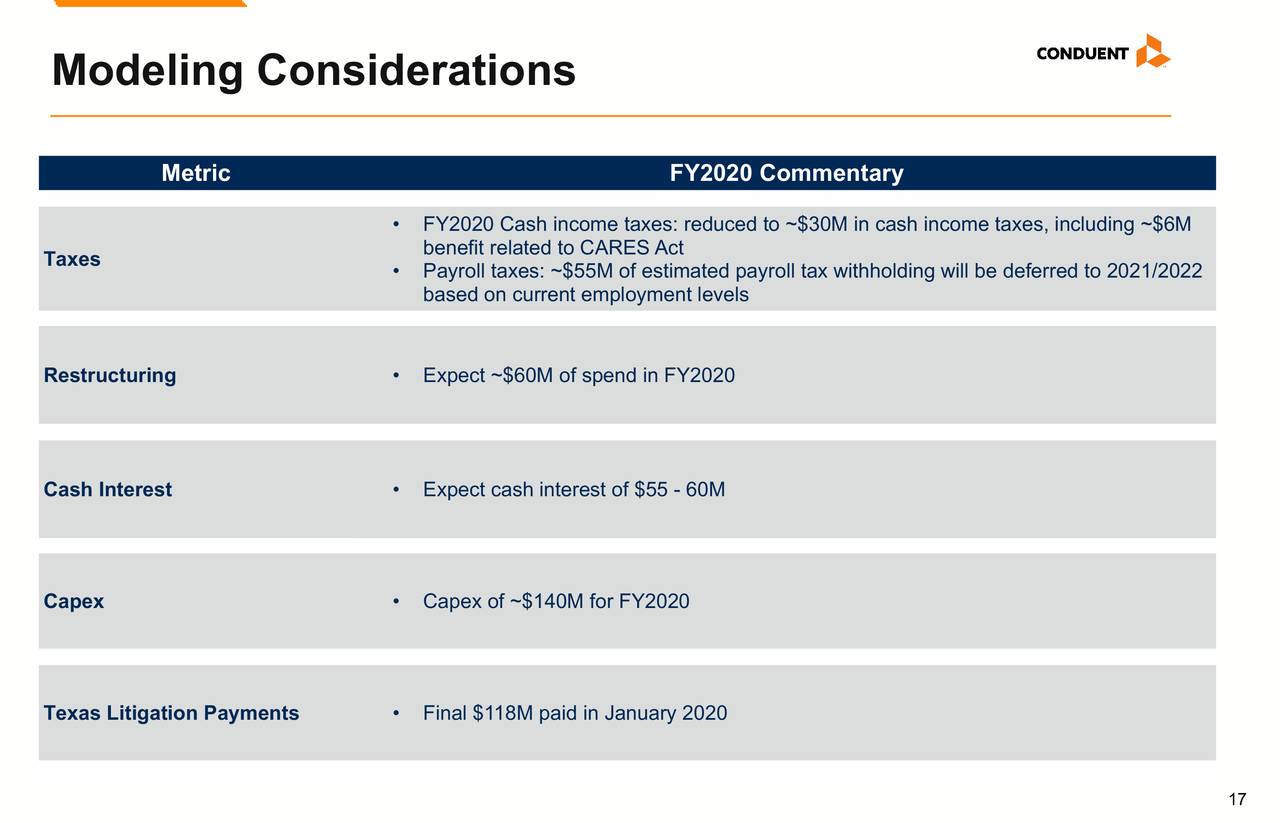 Here are cash flow and the balance sheet from the earnings deck: 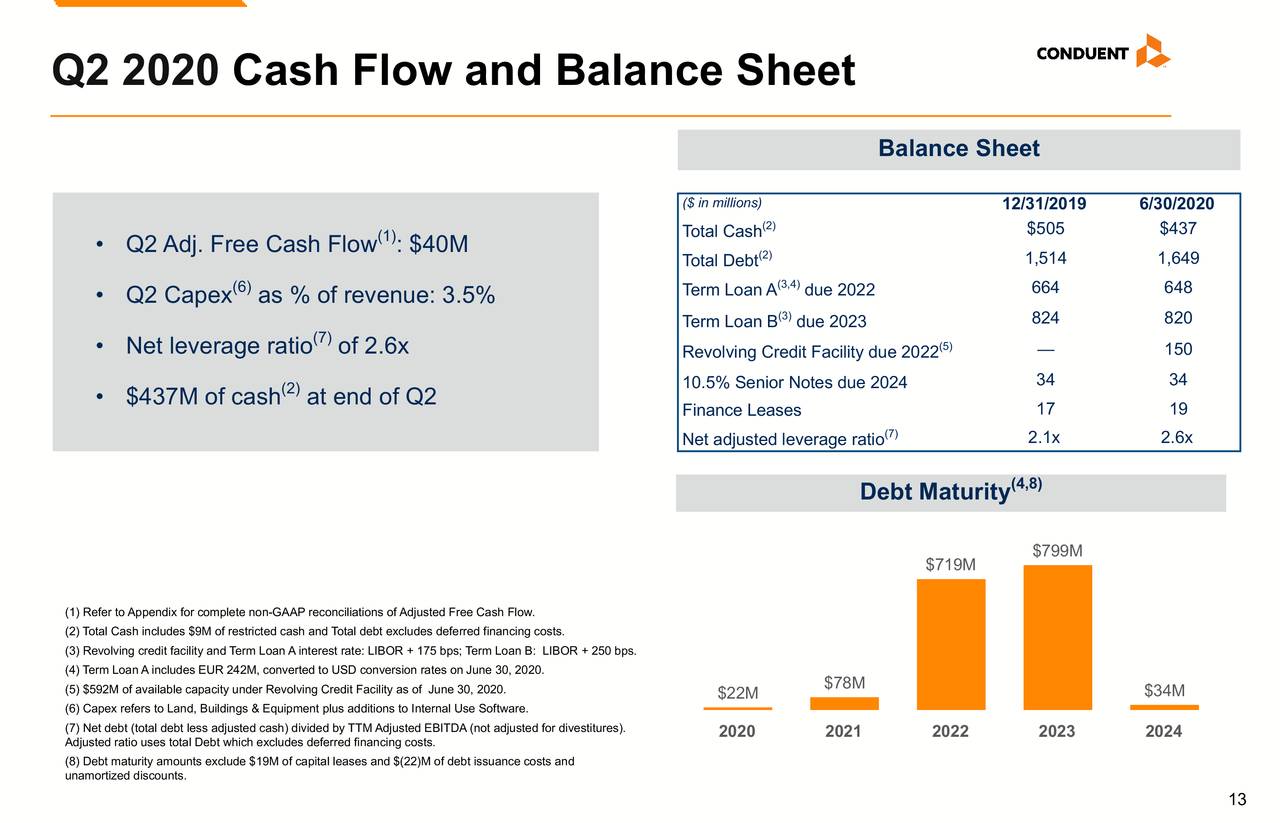 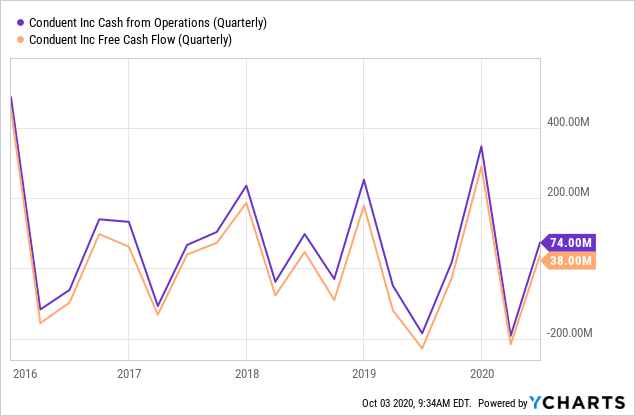 But last year’s Q2 wasn’t so good as it still showed a significant cash outflow which has turned around despite the pandemic. However, the good Q2 2020 performance has been helped by working capital adjustments and $18M in payroll tax deferral from the CARES Act.

While the company has $437M in cash (and $592M available from a revolver), it also has substantial debt at $1.6B. The company expects to spend $60M on restructuring this year and $55-$60M on interest.

Share-based compensation has declined markedly, and dilution isn’t a problem: 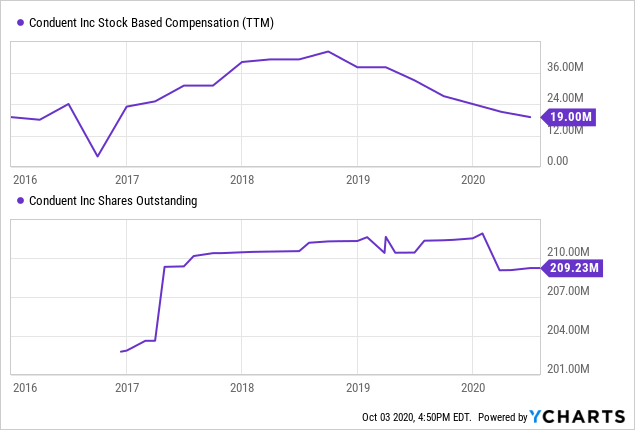 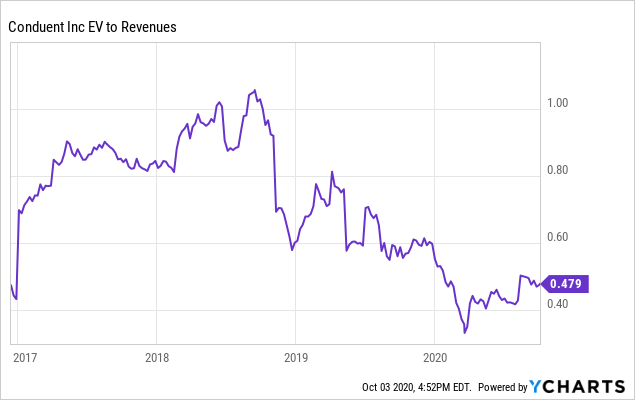 Valuation is fairly modest suggesting considerable room for the shares to run if the turnaround gets legs, which manifested itself in the 90%+ share price jump on the favorable Q2 results early August:

Analysts expect a (non-GAAP) EPS of $0.41 this year rising to $0.48 next year, which gives the shares a multiple in the single digits. One has to keep in mind that the company has a substantial debt; cash flow is more important than EPS at the moment.

The company was victim of a cyber attack in June, although that doesn’t seem to have affected its signing on of new business. One should also keep in mind that Conduent is a small player in the competitive, fragmented BPO (business process outsourcing) industry.

Any significant deterioration in the outlook, for instance, as a result of a resurgence in the pandemic, is a risk, and the company has a substantial debt.

We think the company is in the early innings of a promising turnaround, but the end result is far from a given. However, there are some key takeaways:

If you are interested in similar small, high-growth potential stocks you could join us at our marketplace service SHU Growth Portfolio, where we maintain a portfolio and a wachtlist of similar stocks.