Brazil’s economy has officially entered a recession following the swingeing impact of the coronavirus crisis, which has so far killed more than 120,000 Brazilians and pushed millions into unemployment.

According to the Brazilian Institute of Geography and Statistics, gross domestic product shrank 9.7 per cent quarter-on-quarter, reflecting the effect of widespread economic shutdowns, which have hammered consumption and investment and triggered a wave of corporate bankruptcies. Compared with the same quarter last year, GDP was 11.4 per cent lower.

The record fall in the second quarter is greater than the total loss in any of nine recessions that have struck Brazil in the past 40 years, analysts said.

The official data released on Tuesday comes amid growing concern for the direction of economic policymaking in Latin America’s largest country, with Paulo Guedes, finance minister, increasingly isolated in a cabinet that wants to spend its way out of the crisis.

Investors are particularly concerned that President Jair Bolsonaro might move to loosen or even abandon a mandated spending cap that serves as an important fiscal anchor, a move that would risk triggering capital outflow from the developing market.

“Brazil will have to face painful fiscal adjustments in the aftermath of the crisis, if it wants to put its economy back on a sustainable footing,” said Luciano Rostagno, chief strategist at Mizuho Bank. 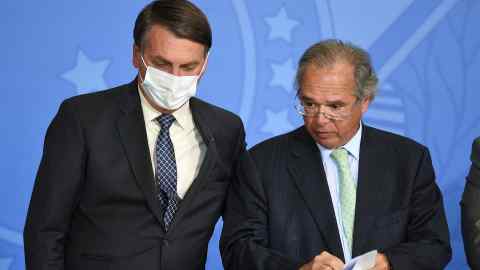 Many economists said they were hopeful that the second-quarter data reflects the worst of the crisis, and the economy will rebound in the second half of the year. Boosted by an array of fresh data for manufacturing and services activity, as well as retail sales, most analysts have begun revising forecasts higher for the year.

Rather than a contraction of 8 or 9 per cent, as some had predicted at the height of the crisis, the consensus among economists is that the Brazilian economy is now likely to shrink 5 or 6 per cent this year. Forecasts for next year are for 3 per cent growth.

“The worst has gone. When we look at the results now, we can have a more optimistic view of the short term,” said Luana Miranda, a researcher at the Brazilian Economy Institute.

“But it is important to keep in mind that the background of the recovery is the countercyclical measures that the government is taking, including job support and income compensation. The question is: what happens next year when the government stops these measures?”

Much depends on the trajectory of the virus, which currently appears to be subsiding in Brazil’s major economic centres. The nation currently has the world’s second highest reported death toll after the US and many state governors have been extremely cautious in re-opening businesses.

Another key concern is the future of Mr Guedes, an economic liberal whose plans for a sweeping reform of the state won the market’s support for the Bolsonaro government.

The finance minister’s commitment to fiscal rectitude, however, has in recent weeks isolated him from the president, the cabinet and Congress, which appear to be edging towards more spending to stimulate the economy post-coronavirus.

Mr Bolsonaro on Tuesday said he would extend an emergency cash handout programme until December, although the value would be reduced from the $100 currently available to Brazil’s poorest to $50. He also said he would present to Congress an administrative reform package in an effort to cut state costs.

“Our view in Congress is of extreme concern. With even the insinuation of Guedes’s departure, we have seen the dollar rise and the stock market decline,” said Sergio Olimpio, a senator with the rightwing PSL.

“Bolsonaro does not like to be contradicted, so he is trying to get rid of Guedes by treating him poorly. We have seen this before with other ministers, including [former health minister Luiz Henrique] Mandetta and [former justice minister] Sérgio Moro. Guedes is walking the plank.”