ConocoPhillips (COP) released its Q3 EPS report on Thursday and there were no big surprises for investors given the current O&G low-price environment. Other than some comments on political developments in Alaska and with respect to a potential Biden fracking ban on Federal property, the conference call was rather uneventful. That is, until the final question posed by Phillips Johnston from Capital One – who has quickly become my favorite energy analyst. But before I get to that question, let’s take a look at the impact of the upcoming impact of the Concho Resources (CXO) acquisition on dividend income for shareholders of both companies.

As most of you know, under the terms of the merger agreement CXO shareholders will get 1.46 shares of Conoco for each share of Concho. As a result, CXO shareholders will see their dividend go from $0.80/share annually to $1.72*1.46=$2.51/share annually – up more than 3x. That’s a great deal for CXO and is arguably a dividend level they would likely not have reached for many years had the company stayed independent.

I hate to open up an old wound, but it’s instructive and important going forward to look at the history of the ConocoPhillips’ quarterly dividend:

Source: Conoco Phillips (the table has been edited by the author to show only changes in the dividend for the sake of briefness).

COP shareholders can’t forget the big dividend cut in February of 2016 that saw the quarterly dividend slashed by 66% from $0.74/share to $0.25/share. For those who don’t remember, the cut came just two quarters after CEO Ryan Lance’s infamous promise on the Q2 2015 conference call:

In addition, note the comments Lance made on the Q4 conference call, after the dividend cut was announced:

And we’re committed to do the dividend. It’s still a priority, first use of our cash, and growing that as our cash flows grow.

(Emphasis added by the author).

Yet the dividend chart above shows very slow progress in dividend growth over the past 4 years. In fact, the dividend has yet to be restored to anywhere near its previous level. That is despite the fact that COP’s strategic plan (selling low-margin assets, paying down debt, attaining an A-rated balance sheet, and focusing on capital discipline) has been executed – more or less – perfectly. The company was way ahead of the rest of the industry in selling low margin assets like oil sands and its L-48 dry gas assets. The result was a fantastic full-year 2019 that saw COP earn $7.2 billion, or $6.40/share, and generate more than $5 billion in FCF. The company ended 2019 with $8.4 billion of cash and short-term investments (estimated to be more than $7.50/share).

The Question of The Year

With all that as an historical backdrop, here was the question posed by Phillips Johnston that ended yesterday’s conference call:

Hi, guys. Thanks. So just one question to me and it relates to your future return of capital to shareholders. In the last five years, you guys have repurchased a little over $10 billion worth of stock at an average price of around $62 a share. So at today’s share price, the paper loss in that program is pretty substantial. I realize you guys plan to repurchase more stock here in the fourth quarter.

But I wanted to ask if there’s any appetite at the Board level to scrap the idea of share repurchases. And instead, pursue a fixed plus variable dividend strategy that would target paying out a certain percentage of your free cash flow directly to shareholders each quarter.

COP shareholders should be thankful that, finally, an energy analyst pointed out what every shareholder (and certainly the COP executive management team…) already knows: the dividend has obviously not been management’s “priority” and “first use of cash”: share buybacks have been. And it has destroyed billions of shareholder capital (very similar to Exxon’s (XOM) share buybacks). In a Seeking Alpha article last year, I pointed out to shareholders that COP’s shareholder returns policy was the complete opposite of the company’s stated policy that the dividend was a “priority” and “first use of cash”: share buybacks obviously are (COP’s 10-Year Plan: Where It Misses The Target): 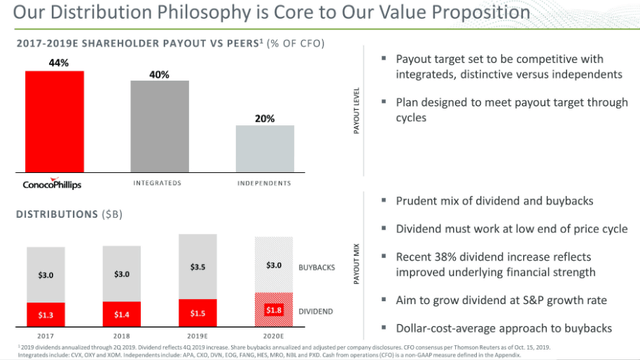 So, rhetoric aside, the bottom bar graph on this slide documents COP’s real “distribution philosophy”. Adding up the allocations to buybacks and dividends over the past 4-years, we get an aggregate of $12.5 billion on buybacks and only $6 billion for dividends. So Johnston was absolutely correct – Lance and the COP management team has put more than a 2x priority on cash allocation to buybacks over dividends to directly to shareholders. And the buybacks have obviously been a significant waste of shareholder capital.

Now for CEO Ryan Lance’s rather long winded response to the question, which I want to include in its entirety:

Yes. I think the most important thing is your last piece of that. We are targeting over 30% of our cash back to the shareholder. That’s what we’ve committed to and delivered on in excess over the last three to four years, since we kind of came out to reestablish a new value proposition for this business. And I think the dividend today is certainly covering a large share of that.

Also think that buying our shares back at this kind of level is an important thing to do too, because shares are certainly well undervalued. It’s certainly relative to where we think mid-cycle price should be. So I don’t think we’ll give up on share repurchases completely.

You made a real point. I mean we wanted to buy our shares through the cycle. And this was a pretty significant downturn with curtailed production and the like going on in the second quarter. So we did suspend for a while. We wanted to restart up because the benefit to really buying your shares is not just buy them.

When you’re at mid-cycle price, we continue to buy them through the low end of the cycle because that’s what brings down the average cost of your shares, obviously. So we still think it’s going to be a piece of our return to shareholder pie.

And the question begins, what happens on future excess returns when if there’s another big cycle, and we start to exceed our mid-cycle price call and we’ve had conversations around that with the market, and we continue to look at all the different ways to do that and continue to be open in all the different ways to do that. But at this 10 seconds, the dividend more than satisfies our return to shareholders.

A couple points to make here:

The bottom line here is that Lance says COP’s policy is to return “more than 30% of our CFO to our owners annually.” Yet if the 30% target over-emphasizes share buybacks by 2x over the dividend, this effectively means the dividend is reduced to only ~10% of CFO. How is that “compelling” for shareholders? This is the problem with energy companies, and specifically COP: shareholders are 100% exposed to the downside in energy prices, but less than 10% exposed to the upside when it comes to the “good times”. That is not a great risk-reward proposition. As compared to a “compelling” investment opportunity, it is very much a repelling investment opportunity. As a result, it should be no surprise to CEO Lance or anyone else that investors are fleeing the shares despite what is arguably the best and best managed low-cost portfolio in the business: 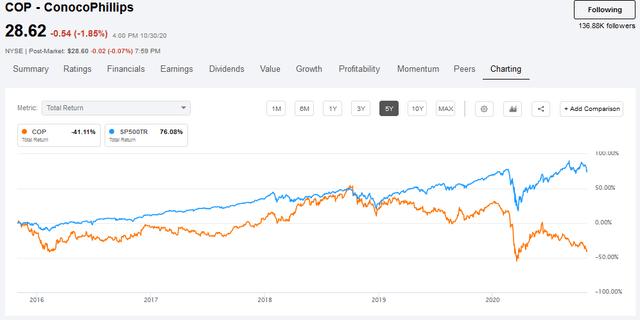 As shown above, the opportunity cost of COP versus the S&P500 over the past 500 years is considerably over 100%.

As I reported in my previous article on the merger (see Parsing COP’s Bid For Concho), the all-stock transaction will result in an estimated 285,116,100 shares of COP being issued to CXO shareholders in order to close the deal. At COP’s current dividend rate of $1.72/share annually, that means an additional dividend obligation of an estimated $490.4 million annually to cover those shares. However, I also pointed out: even during a very difficult Q2, CXO generated $238 million of free cash flow. On an annualized basis, that is an estimated $952 million, which easily covers the pro-forma dividend obligation of the newly issued COP shares.

So there is absolutely no reason, even in the current challenging environment, for COP management not to make good on its promise that the dividend is a “priority” and is the “first use of our cash” while it sits on nearly $7 billion in shareholder cash:

CEO Ryan Lance’s rhetoric about shareholder returns and making COP a “compelling” investment is just that: a lot of talk and little action. While CXO shareholders should be doing joyous back-flips over the massive dividend income increase they will see as a result of the merger, long-suffering COP shareholders have, once again, gotten the short-end of the stick. Meantime, Lance sits atop a nearly $7 billion cash hoard and there is no indication COP shareholders are going to participate in the excellent returns the company generated in 2019 and is positioned to generate for years to come.

The bottom line: COP’s management succeeded beyond my wildest dreams on the very difficult tasks associated with its strategic corporate plan. It has become the premier independent O&G producer in the world with arguably the lowest-cost and highest quality production profile. However, management has fumbled badly on the much easier (and promised) task: returning cash to shareholders. As a result, investors are fleeing the stock because it is still an awful risk/reward proposition – 100% exposure to weak commodity prices as a result of an abundance of energy, and only an estimated 10% exposure to (typically only temporary) good times when oil and gas prices actually recover. When it comes to the dividend: actions speak louder than words. COP certainly has the capacity to be a very compelling investment. If management changed course, reduced the over-prioritization of buybacks over the dividend, and implemented a variable dividend policy so shareholders could fully participate in the good times, investors would likely come back to the stock. Otherwise, COP is just another ho-hum O&G producer in the terrible energy sector. That said, for a second opinion note that BofA is bullish on the company and has a $44 price target (up ~45% from the current $30.50).

Disclosure: I am/we are long COP XOM. I wrote this article myself, and it expresses my own opinions. I am not receiving compensation for it (other than from Seeking Alpha). I have no business relationship with any company whose stock is mentioned in this article.