In my book, Investing in Banks (2016, Risk Management Association), one chapter analyzed 31 publicly traded banks that increased their dividends annually from 2004 through 2014.

Less than 10% of all US banks increased dividends during the 2008-09 Great Panic. At that time, 25% of the publicly traded banks eliminated dividends, 40% cut dividends but kept paying a smaller amount, and 17% kept their dividends at the same rate as pre-Panic. (Another 7% did not pay dividends.)

Given the success of these 31 Dividend Champion banks, it should come as little surprise that only two of the banks have been sold through merger during the past six years. During that same time, the total number of US banks shrank by more than 22%. The vast majority that sold were underperforming banks that consistently failed to generate returns sufficient to cover cost of capital.

In contrast, as this post will show, the Dividend Champion banks as a group have consistently achieved superior returns that exceed cost of capital.

The 29 banks that remain independent are the subject of this Seeking Alpha post. Table 1 shows a list of the 29 banks, their asset size, market capitalization, and dividend yield as of August 31, 2020.

Note that the valuation at month-end August was 1.37 Price-to-Tangible Book Value, a valuation 34% less than the 16-year average and 44% below year-end 2019. 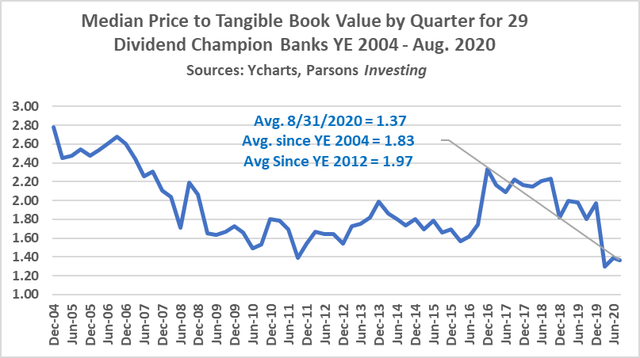 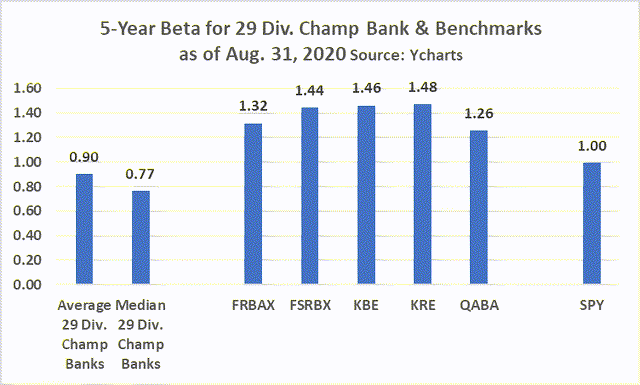 At the end of August, the average yield for the Dividend Champions rose to 3.54%, a rate eclipsing even the high point during the 2008-09 Great Panic. 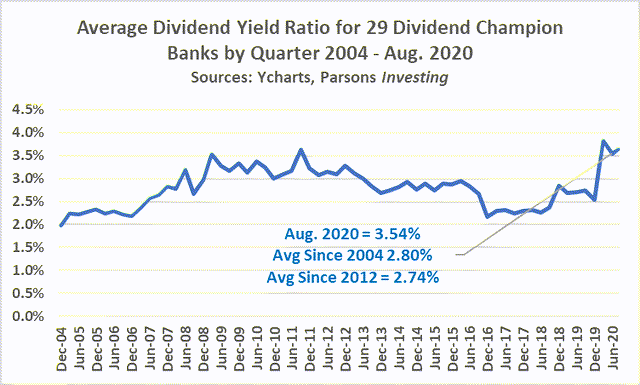 Chart 4 shows the average annual dividend growth for the Dividend Champions. Last year, these banks saw dividends grow 9%, up from a historical growth rate of 7%.

Unlike the megabanks that are subject to immense political scrutiny, none of the 29 Dividend Champion banks have, to my knowledge, made a public statement committing to not increase dividends. All but one of the banks as of August 31, 2019 are paying an annual dividend greater than 12/31/2019. The range of the increase is from a low of .71% to a high of 10%. Year to date, the average increase is 2.5% and the median increase is 2%. 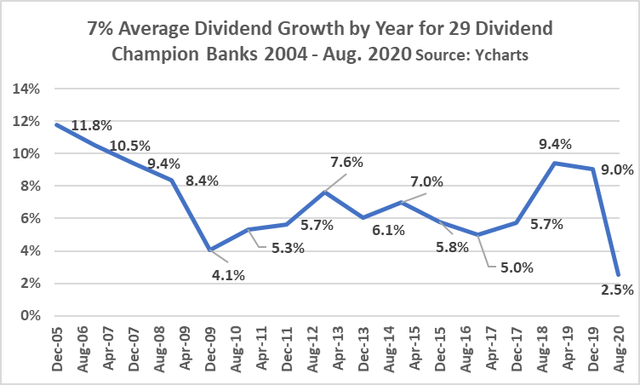 Dividend payout ratios for the Dividend Champion banks as of 2Q 2020 are exactly in line with the average payout ratio dating back to 2004. A 41% payout ratio suggests the banks have considerable ability to cover dividends, even if earnings fall 50%, as was the case in 2008, when the payout ratio spiked to 60%+. 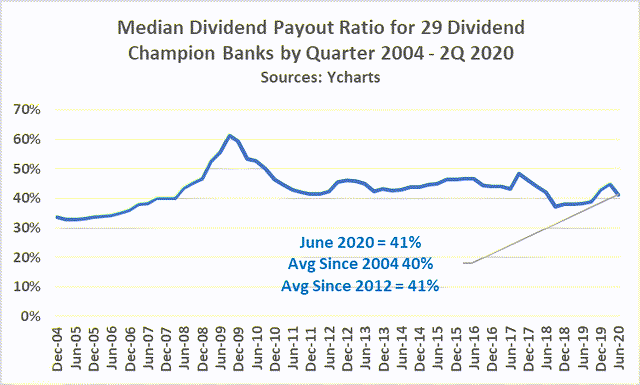 Profitability for the 29 Dividend Champion banks as a group remains steady. Importantly, the majority have returns on equity that exceed cost of capital.

The median 2Q 2020 ROE was 9.4%, 80 basis points lower than the average since 2014. The 14% returns seen in 2004-06 is certainly impressive, but it should be noted that all banks have increased equity by 20%+ since that time. The increase in equity (the denominator in ROE) largely explains the relative change in return on equity since that time.

Year to date, as well as for the past 3, 5, 10, and 15 years, the Dividend Champion banks have outperformed industry benchmarks, as the next five charts show. These charts also show the wide gap between bank stock performance and that of the S&P 500.

Readers of my book know that banks wildly outperformed the S&P 500 from 1991 to 2006. During the past 15 years, banks have wildly underperformed the S&P 500. The question for investors is whether banks are forever going to lag the S&P or whether there will be a reversion to the mean at some time in the future. My bet is on the latter. 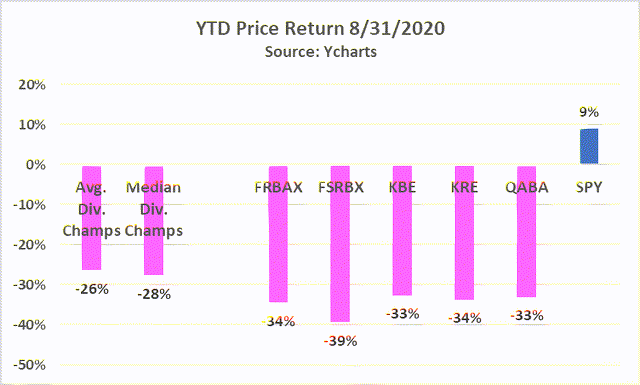 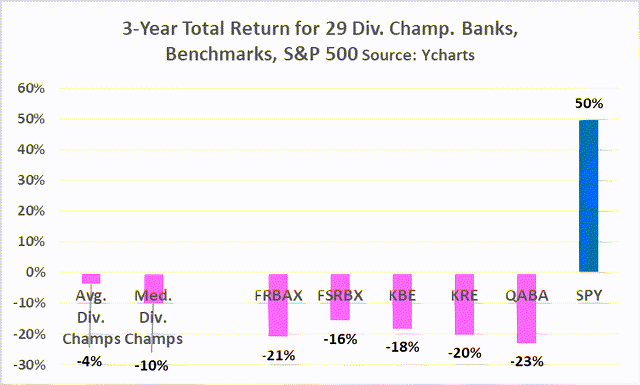 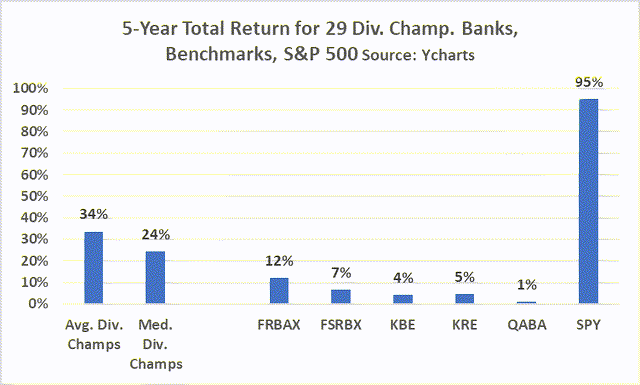 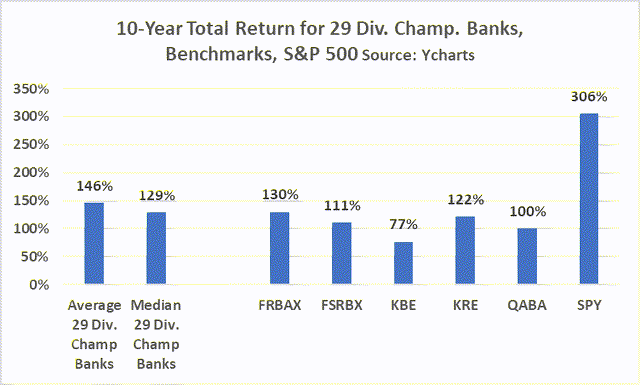 Double-digit return from this strategy can be realized under the following assumptions:

Double-digit returns for the Dividend Champions are predicated on the group’s median Price-to-Tangible Book reverting to historical averages of 1.8-2.0.

While it would certainly be great if the reversion happened sooner rather than later, it is possible to achieve double-digit returns over the next four years even if the reversion is delayed until 2023.

Risks to the group maintaining current dividend yields and seeing valuations revert to historical average are principally tied to the same COVID-19 economic/political risks faced by all US banks.

These risks are substantial and largely explain why valuations are at historic lows and dividend yields at historic highs.

In my next post, I will identify my favorite Dividend Champions. It is possible, I believe, to further mitigate risk and enhance return by selecting 12 banks that provide the most attractive potential for achieving superior risk-adjusted returns on equity.

Disclosure: I am/we are long BHB, BMRC, CFR, CBSH, FMCB, SYBT. I wrote this article myself, and it expresses my own opinions. I am not receiving compensation for it (other than from Seeking Alpha). I have no business relationship with any company whose stock is mentioned in this article.