Note: This report was originally published on May 6th on Value Investor’s Edge, a Seeking Alpha subscription service. Nothing has been changed from the original version.

As the COVID-19 began to unfold it became clear that every shipping segment was going to be impacted in a unique manner. As prospects for a V-shaped recovery soon gave way to the prolonged U shaped theory (which I maintain here) theories about how each segment would recover were also quite varied.

For container shipping the end to a theoretical V-shaped recovery, as staggering unemployment took hold, saw the prospect of pushed-back demand destroyed. That pent-up demand would no longer carry the forward outlook but rather a demand collapse would prevail, pushing a very bearish narrative.

As the global outlook remains in question, and many would argue continues to deteriorate, prospects for a container shipping recovery in the short run slip away while the medium to longer term outlook must be called into question.

The following report will be short and to the point.

The story up till the COVID-19 outbreak was the bifurcated market with larger vessels seeing a massive glut and mid- to smaller-sized seeing very low fleet additions.

But demand destruction on a massive scale has become the great equalizer.

Larger vessels are still horrifically oversupplied and their main route, Asia-Europe, is being decimated.

The lone bright spot for companies is that these energy-intensive vessels are seeing extremely cheap bunker prices at the moment. This has actually resulted in some sailings around Africa instead of traversing the Suez canal. Interestingly, this led to drops in canal passage fees as of late.

Even with these longer voyages, blanked sailings among larger classes are still being coordinated in an effort to maintain some sort of balance in the market.

Medium to smaller classes aren’t so fortunate to have that coordination but they had been benefiting from a thin orderbook and robust demand in the Asia north/south trade as well as the trans-Pacific trade.

However, they are now succumbing to market pressure as the positive supply side outlook will be dwarfed by the demand side destruction.

No class is safe but orderbooks and trade routes will spell out who recovers first. 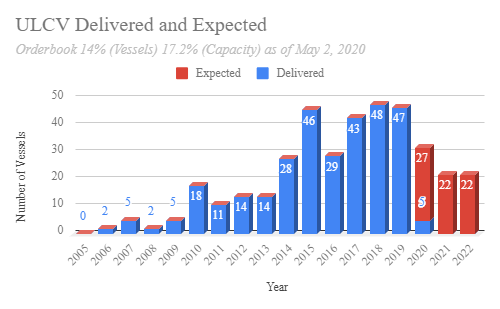 The majority of deliveries for this larger class occurred during the 2015-2019 years. But the impact of deliveries is felt long after the peak as the market struggles to absorb and rationalize the tonnage.

It’s also absolutely worth noting that I believe the extent of meaningful cascading was reached in the middle of 2019 with little future cushion expected there.

Cascading is the act of a vessel with more attractive economies of scale (or other beneficial attributes) pushing another vessel (typically smaller) out of a trade lane or such. On a large scale this collective action works its way through the supply chain to varying degrees depending on a multitude of factors, but it has its limitations.

Therefore, the ULCV class must come to terms with a horrible demand side picture for the primary trade lane they serve, while still absorbing previous tonnage and bracing for another 1 million TEUs in 2020 they don’t need, all while witnessing an end to cascading. Oh, and there are zero demolition prospects here, but even so, the older vessels in this class are about half the size of these newer modern behemoths.

It seems premature to begin talking about an organic market balance for this class (one without coordinated blankings) until 2022.

Looking down to the medium class though we see an entirely different picture. 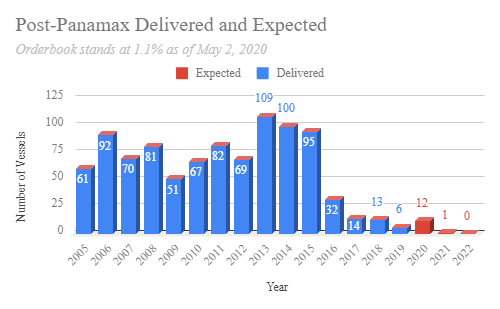 While owners were busy throwing their money at the ULCV class it seems the entire world forgot about other classes serving a diverse number of global routes.

In fact, container orders for vessels between 5,500 TEU and 14,000 TEU have numbered just 12 since the start of 2019. This compares to 41 orders of 14,001 and above TEU vessels with many of those being in the 23,000 TEU range. Of course, from a capacity standpoint the difference is magnitudes greater.

This has led to a 1.1% orderbook for the post-panamax class and a zero percent, yes 0% orderbook, for the panamaxes. Negative net fleet growth is practically assured over the years ahead which should help mitigate the damage brought on by the negative demand downturn to a slight degree.

Past recoveries have shown major cities often recover at a much faster pace than rural counterparts. As these vessels serve a generally larger port area with greater demand needs (cities) they are likely going to be among the better positioned.

It’s not pretty for the sub-panamax class or the handy as they are set to receive more tonnage than they’ve seen in years. Deliveries fall sharply after 2020 but with the quick build times for these vessels forward visibility is limited to about 14 months on average.

Before we move on let’s quickly turn to asset values, newbuild order trends and demolitions. 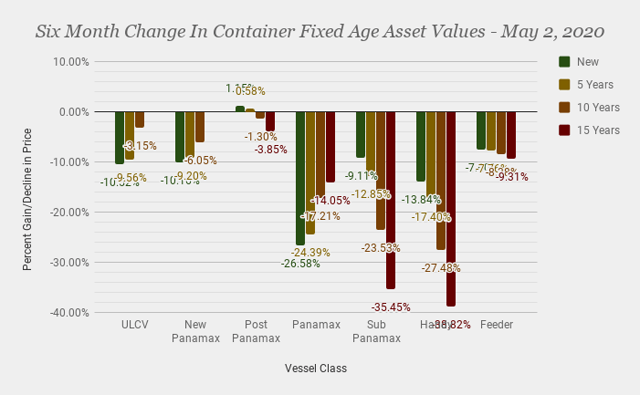 Now, that is one ugly chart. Let’s be honest, there’s nothing good here. However, it’s noteworthy that asset valuations are lining up with predictions made above, with the post-panamax class having possibly the best current set up and exit outcome.

On the newbuild front, a single order in April for a 505 TEU feedermax I think sums it up. Capital preservation is the name of the game now and newbuild orders will be few and far between. This will set up a bullish formation in the supply side if it persists for much longer, but what demand will be like is another story.

On the demolition front, an equally discouraging month as only one vessel was retired in all of April. That can be excused as deals here are being delayed due to COVID-19 restrictions.

But can we expect massive removals going forward? Probably not on a TEU basis. Let’s take a look at what I mean and how to gauge the demo market ahead.

Looking purely at ship numbers by age can be a bit misleading. 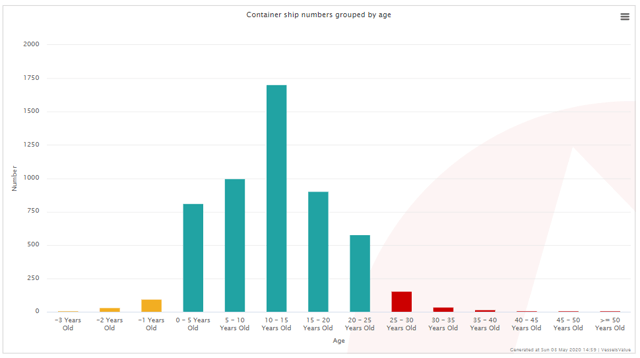 Here it looks like the balance in may equal the balance going out. But what we are most interested in is capacity, or TEUs. 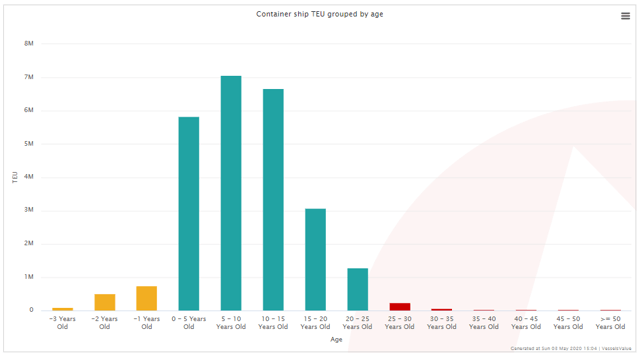 In this context, you can see we are dealing with a very young fleet and prospects for further net fleet growth.

Here in the USA, consumers drive about 70% of all economic activity. These consumers are real people many of which are experiencing hardships of an unparalleled nature in their lifetime.

These households are not experiencing a liquidity crisis or something that can be solved by Fed action. They are experiencing a solvency crisis through massive unemployment that has in some cases left households which were already reliant on two bread-winners without any bread at all. This cannot be remedied by the flip of a switch.

It is from this standpoint in which the container shipping situation must be viewed.

The meager bridge payments from governments are welcome but they are no substitute for traditionally secure employment which inspires consumer confidence and spurs demand for products.

The latest ISM manufacturing numbers out of the US confirm what many already knew. But instead of focusing on numbers, which were horrific, the sentiment is what’s important going forward.

According to the ISM, manufacturers were “strongly negative regarding the near-term outlook, with sentiment clearly impacted by the coronavirus pandemic and continuing energy market recession.”

Managers need clarity before speculative investment and production decisions are made. This is what allows for employment gains. Even when clarity is achieved the idea of a snap back for all industries is not realistic. There will be a gradual return for many which entails prolonged unemployment. Of course, in the short to medium run this implies a hefty pool of workers from which to choose – theoretically suppressing or even rolling back wages.

Again, these workers are the consumers on which the economy is most reliant.

Let’s also acknowledge that demand for container shipping was already under pressure from a slowing of globalization (offshoring) which up till recently had been adding a healthy multiplier above global GDP growth since the 1990s.

As of late, protectionism and re-shoring have been political pillars for some politicians in key economies. This global economic crisis presents an opportunity to enhance support for these goals as economies with once healthy employment backdrops suddenly find themselves with millions upon millions of newly unemployed.

Until the bleeding stops and we see stability followed by plans for an economic recovery (ideally coupled with an organic recovery), it’s impossible to say exactly how this demand side picture will unfold.

So what does all this mean? For that we turn to some very simple charts that I probably could have led with, but then you wouldn’t have had the thrill of sitting through my 1,566 previous words of supporting information. 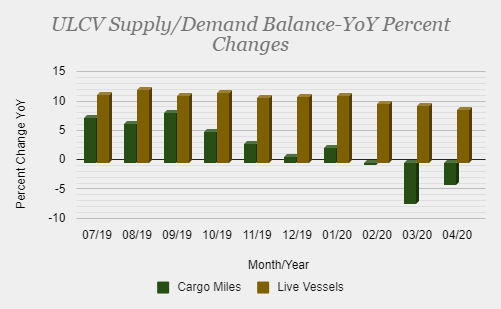 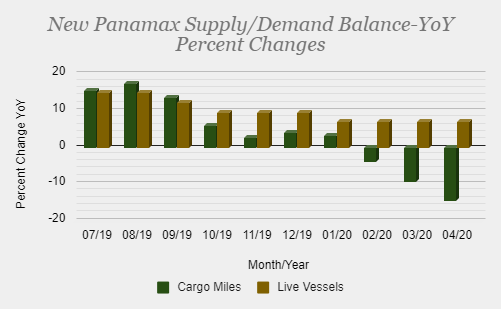 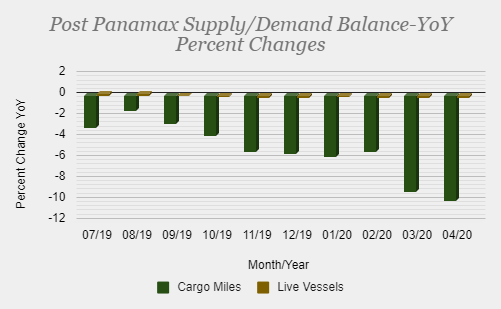 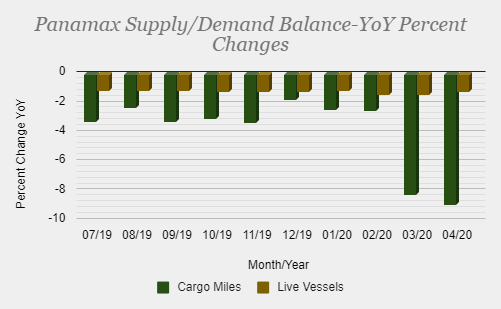 There you have it. We are seeing a growing disequilibrium between supply and demand resulting in a looser market providing the foundation for further rate declines.

Again, this demand driven situation is one that cannot be readily resolved by bankers and cannot be easily arrested by government intervention. This is an employment and household solvency crisis which will drive a steep drop in consumption for many months to come.

Unemployment continues to rise and consumers are feeling less certain. Those who have already found their lives turned upside down won’t snap back. They are going to need time. Others are facing that threshold as I write and hunkering down.

Savings has increased as of late, indicating how those with financial means are also responding to the uncertainty. This is hardly surprising as it is in their self-interest to save up for the rainy day that is upon us, however, from a big picture economic perspective it exacerbates the downturn.

(Economists would point out that savings is not part of the equation cited in the beginning – and while investment can be a function of savings we can obviously conclude that there is very little investment in this current economic environment.)

As noted in my last report, I have never seen a bear market start off at its peak. It would defy consequential feedback loops and the circular flow of economic activity. Meaning more pain is likely to come.

As the global economy further navigates this downturn container shipping will be in for the ride and in the end faces a recovery scenario only as good as the billions of consumers/workers supporting demand for their services.

But as the economy does begin a return to normal we will see signs of progress. This may incite some to proclaim that we are heading back to pre-outbreak levels. We will not. That progress may seem exciting at first but the reality facing tens of millions will be reflected in container shipping demand. After that initial excitement demand will fall well short of previous levels and then begin a crawl back to normalcy.

A membership to Value Investor’s Edge includes exclusive work from J Mintzmyer, James Catlin, and Michael Boyd, along with occasional contributions from guest authors. Members will always receive a first look at new ideas, trades, and in-depth research reports. We offer a quarterly review of alternative income opportunities, and we post a weekly update with the latest value opportunities, research development, market analytics, and current trades. Furthermore, we do full ‘earnings season’ coverage of our focus coverage firms. Finally, we offer a full suite of exclusive market analytics for the shipping sectors and for income opportunities.