Consolidated Communications Holdings (CNSL) investors experienced an unpleasant surprise in April 2019. Management announced what was referred to as a “change of policy with respect to capital allocation.” It was, in more straightforward terms, a complete suspension of dividend payments going forward. All available cash was to be used for deleveraging as of that quarter. The company chose a complete change of course: from being a lofty dividend yield provider to a conscientious debt manager.

This message did not go down well with investors, which includes myself, and the share price pretty much halved from over 10 dollars to around 5 dollars almost overnight (see below graph with the large drop in the middle). Unfortunately, the share price hasn’t shown a recovery yet and is still only sitting at $5.27. We’re already 1.5 years down the line from the moment of the dividend suspension at the time of writing of this article in November 2020, so one may wonder how much longer it will take for things to get better.

It is taught in finance schools that it’s a wise decision for management of a company to not pay dividends to shareholders if there’s a better use for the cash. Consolidated Communications’ management justified the dividend suspension that was announced with the Q1 2019 report by stating that the net debt leverage of nearly 4.5 was getting out of hand. They worried that they would run into trouble with handling that debt.

There were maturities upcoming and having a stronger cash position would help in negotiating for better terms and pushing maturities out. However bad this message landed with investors, there was definitely some merit in this justification. I’d argue that investors can, at this moment in time near the end of 2020, indeed feel much more comfortable with the financial foundations of the company than at the beginning of 2019. This article will show some evidence of that statement.

Despite the drop in share prices in 2019, I decided to keep my position. I paid an average $9.45 per share as it currently stands (I averaged down somewhat after April 2019) and I did enjoy some dividend payments before the dividend suspension. For me, the key reason for staying invested in Consolidated Communications, despite being underwater, is the company’s focus on building out the fiber infrastructure.

I believe that this is a strategic choice that will eventually pay off, because fiber simply is the best quality fixed line connection available and it has the highest chance of winning in the competition with other types of fixed line networks, namely copper and cable. So my investment thesis for Consolidated Communications is that the short-term pain of missing out on dividends will be compensated by long-term gains of having a financially strong company with valuable fiber assets.

Let’s have a look at the company performance by assessing the P&L statements, balance sheets and cash flow statements (in that order) over the last quarters.

The trends over the last five quarters show a top line with around $330 million in total revenue each quarter (see table from the CNSL Q3 report). 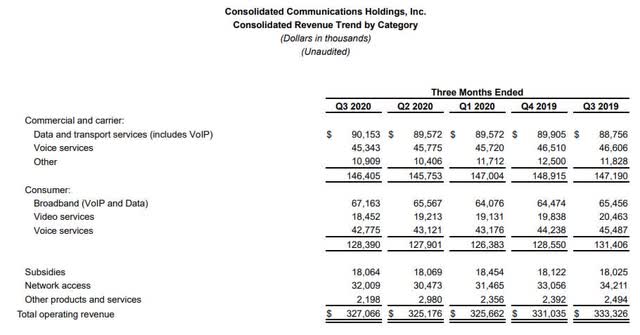 As one could expect in this era of growing data usage, the data services for the Commercial and carrier segment and the broadband services for the Consumer segment are showing gradual growth each quarter. The legacy voice and video services, contrary to that, are slowly declining. The overall picture is that the top line has been somewhat declining with single-digit declines each quarter from the start of 2019 until a reversal of the trend in the most recent Q3 2020, which is up slightly from the preceding quarter ($327.1 million up from $325.2 million).

The ARPU has been steadily rising during the slight decline of total revenue. Customers of the company are more and more high value.

Moving more towards the bottom line, the quarterly profit and loss statements show a stable EBITDA and a substantial improvement in income from operations. The income from operations has consistently been in the $35-$40 million range in 2020, while it varied between $14.3 and $26.7 million per quarter in 2019.

This improvement in income comes from a continuing focus on reducing direct costs, SG&A expenses and declining depreciation and amortization. These make up the operating expenses that are shown in the below table.

Management had the key objective to reduce the net debt leverage when it decided to suspend dividend payments. The aim was to report a leverage ratio lower than 4 by the end of 2020. The above table shows that management will reach this goal. Leverage has consistently been going down since the 2nd quarter of 2019.

READ ALSO  Relapse and recovery - What is the economic impact of the latest round of lockdowns? | Finance & economics

The debt profile in Q4 2019 looked challenging for the company: 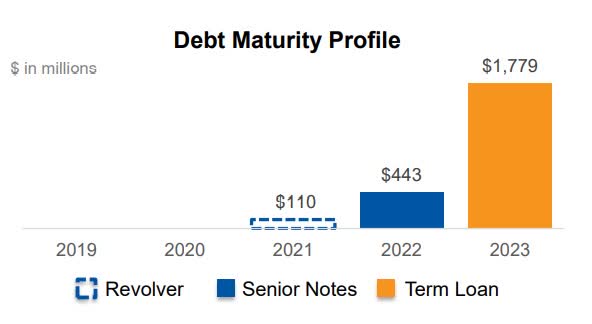 A relatively small amount of revolving credit was available and 2022 and 2023 had massive amounts of debt maturing.

Consolidated Communications has made a massive step in improving the debt situation as displayed above. It has refinanced by agreeing to a new senior secured loan with Searchlight Capital partners that only matures in 2027. There’s no significant maturities left before that time now, which provides the opportunity for Consolidated to work on the execution of the long-term plan without any stress regarding debt payments. In addition to the refinancing, it was agreed that Searchlight will over time become a significant stakeholder owning 35% in the company if a number of specified phases are concluded. At the time of writing, already 8% of equity was owned by Searchlight.

Turning to the asset side of the balance sheet, the most important comment to make is that Consolidated is continuously investing in the fiber infrastructure. The CAPEX that hovers around $50 million per quarter is 40% maintenance and 60% build out.

The quarterly cash flow statements are showing improving free cash flow. In Q3 2020, the free cash flow exceeded $60 million, tripling the $20 million in Q3 2019. In addition, cash and cash equivalents at hand reached almost $100 million at the end of Q3 2020, while the company had negligible cash at hand throughout 2019. The lack of cash in 2019 added to the uneasy feeling about the upcoming debt maturities in 2022 and 2023 that still needed to be refinanced at that point in time. With the refinancing of the debt and no dividend payout, the company should be able to build substantial cash reserves in the coming period.

Consolidated has around 73 million shares outstanding, which means that the market capitalization is ~$385 million at a share price of $5.27. The book value of the equity was ~$391 million at the end of Q3 2020. This means that an investor can now pick up shares at around book value. This is less than half what it was at the beginning of 2019.

The default risks associated with the debt have completely vanished for now. There’s some other risks associated with an investment in Consolidated Communications. I’d say that the risk of accelerating revenue decline from the current small declines is one. The focus on fiber hasn’t led to any top line improvements in the last two years. The assumption that the strategy will work for the longer term has not yet been proven, although the broadband and data services are gradually growing.

A second risk is that Consolidated Communications loses its diligence in showing gradual improvements every quarter. A rising share price will only come if the current path is followed. There’s no guarantee that this will happen. It will result if management keeps the focus in every quarter.

“Slow is smooth and smooth is fast” is a statement that is sometimes used by the military to describe that slow, but disciplined and deliberate action can be the fastest way to achieve results. This saying springs to mind when assessing Consolidated Communications’ quarterly improvements: slow quarter over quarter improvements should lead to better results eventually than the fast gains for impatient investors by paying out big dividends. This is, perhaps unfortunately, only an assumption until now, because since the dividend suspension in April 2019, the only tangible result for the shareholders has been a halving of the share price.

If we look at the company performance in more detail over the last quarters, however, there’s many improvements slowly appearing as described in the article:

I’d argue that Consolidated Communications Holdings would have been in a worse position if management hadn’t taken the decision to change the capital allocation policy in April 2019. It would have been much more difficult to get to the current leverage levels with the improved debt profile, achieve the interest expense reductions and improved cash position. These financial challenges would probably also have hampered the quarterly operational improvements. Despite the sell-off by investors in April 2019, the shares now represent a stake in a more solid company.

I’m holding on to my position with the expectation that the slow, smooth quarterly improvements will eventually pay off. This could happen via an acquisition of the company by some buyer or through the gradual quarter by quarter improvements, which will eventually show in rising share prices.

Disclosure: I am/we are long CNSL. I wrote this article myself, and it expresses my own opinions. I am not receiving compensation for it (other than from Seeking Alpha). I have no business relationship with any company whose stock is mentioned in this article.