Concho Resources: Off The Recent Highs Ahead Of Earnings (NYSE:CXO)

If you’re a follower of my free articles, you have to have noticed I am pivoting away from the (former) high dividend payers in the legacy Big Cap, Supermajor- European oil companies, toward well financed American independents. Companies like BP, (BP), and Royal Dutch Shell, (RDS.A), (RDS.B). I recently wrote an article excoriating BP for conduct unbecoming to shareholders. One on Shell will follow when I get a minute.

To recap there are a few principal reasons behind this switch.

Instead I have refocused my efforts in picking out American shale drillers that have the staying power to live to see better days, that I am convinced are coming, without restructuring that could lead to investors capital being decimated.

Why these guys? Focus. While they all address ESG issues and climate change goals-as they should and you must do these days, none of them are taking their shareholders capital, and throwing it down a “rabbit-hole,” while they “reinvent” themselves. When a company tells me that’s it reinventing itself, I say fine, “let me know when you finished and I’ll take a look at you then.”

In summary, I like linear, line of sight thinking when I invest. Tell me what you’re going to do for me today if you want my capital. Rod Tidwell, played by Cuba Gooding Jr, in Jerry Maguire said it best. 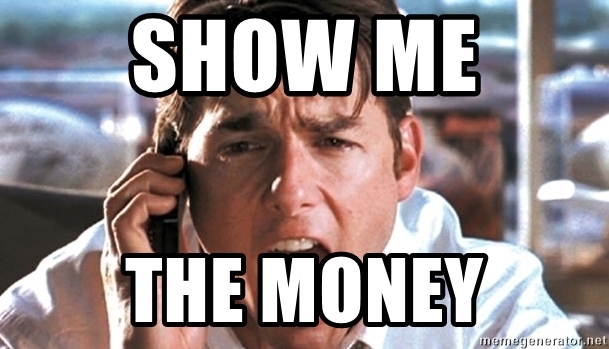 That’s all I care about, the money. If I am a shareholder, I am the only “stakeholder” that matters. If a company is spending “my” capital, it better have a plan to show it on the balance sheet, jolly quick!

First a quick word on shale

The shale miracle will continue in a much altered, and lower intensity form. Shale production is going to drop, and it is happening as I write this article. A few years hence-maybe shorter, I am not a “crystal-baller,” shale development will be primarily limited to big cap companies who can generate enough cash flow to maintain production at levels that support a healthy return on their investment. This has never happened in the history of the American oil business, or globally to a great extent. Drilling has always risen to unsustainable levels, and then crashed to unsustainable levels. The cycles were shorter on the downside, meaning that companies generated enough profits in the good times to ride out a short down cycle.

The difference now is that crash after crash has occurred over the last six years, and not given the players a chance to recoup. The oil service industry for example is nearly decimated by a combination of legacy debt from better times, non-productive assets, and a hollowing out of talent. The offshore drillers are a prime example of an industry honed to perfection, in a market whose continued existence is increasingly being called into question. Their stock prices are reflective of that view.

Shale will rise again though. Not to its former heights, but to levels mentioned above, and run by shrewd, capital efficient companies with key attributes.

Here are my criteria for inclusion in this select group.

We discussed one last week, Pioneer Exploration, (PXD) and found it met our criteria. If you missed it, have a look at the link provided. Continuing this discovery we will now review Concho Resources, (CXO). At first glance they would seem to be another shale driller that ticks the boxes required for survival in the coming months. Having rebounded 60% from its March lows, the question before us, is there more to come? Let’s look closer.

The Permian acreage position certainly ticks the “Good Rock,” “Critical Mass” and “Logistics” boxes. While not as good as some, their principle Delaware basin acreage is fairly high up on the benches, indicating better natural permeability than the lower benches. In particular note their fat acreage in Loving and Lea county New Mexico, right in the core of the eastern bench when the EIA-Wolfcamp “A” structure map shows some of the deepest plays.

In particular note their fat acreage in Loving and Lea county New Mexico, right in the core of the eastern bench when the EIA-Wolfcamp “A” structure map shows some of the deepest plays.

This locale enables them to intersect the Wolfcamp A shallower, and it still gives access to the deeper benches (Wolfcamp B,C,D) for efficient drainage of the entire reservoir. The Rystad graphic, shown below adds more color to this trait. 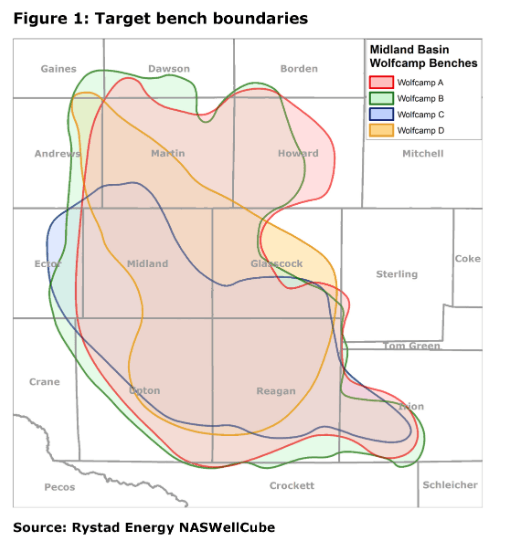 LOE costs are in line with what Pioneer reports and on the decline. Putting it in a position to generate positive cash flow, which they have done at low prices-thanks in part to a successful hedging program. 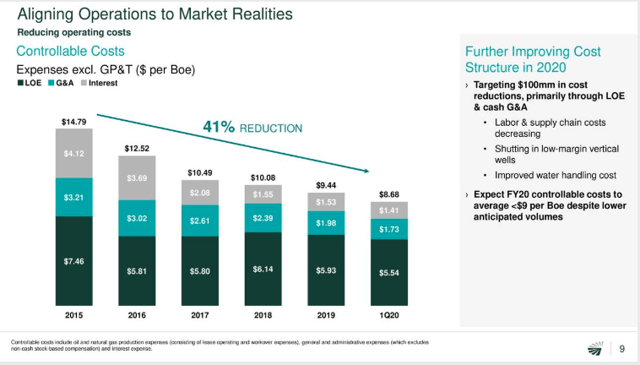 Water supply is a big item for shale frackers. The early model of flowing back millions of gallons of now-slightly brackish water and sending to disposal has come to an end.

Concho is demonstrating leadership in waste water management with its strategic alliance with Solaris Water Midstream, LLC (privately held) to manage the nearly 500K BOWD that the JV’s infrastructure can transport and recycle.

Water is a key component of fracking with some wells taking 20 million gallons to complete.

CXO is another company that doesn’t say much about their “kung-fu,” tech-wise. In one presentation they do note they are drilling 8-9,000′ HZ intervals which puts them in with the in crowd on lateral length. Its a fair assumption they’ve upped their sand concentration ppf, and frac stages. Since it’s Friday afternoon, let’s assume they’ve applied 4-D fracking to their wells as well.

It should be noted that a 2019 internal experiment on well spacing termed, “The Dominator Project” didn’t test out well with spacing at less than half the Permian average, and horizontal legs about half what the rest of the Permian was doing. It didn’t work out with initial well performing at barely basin averages of +/- 1100 BOEPD and later wells about half that.

Fortunately they learned from this error and adjusted their next project in the Delaware, the Marion Benge, to increased spacing and lateral length. Good initial performance was noted and captured in their Q-3, 2019 presentation. 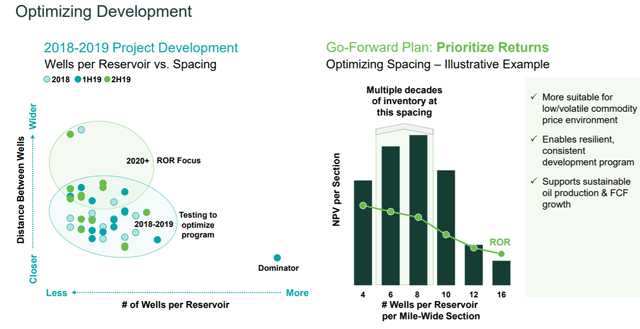 This is the big scary one for many in the Permian crowd. In the case of CXO they retain an investment grade rating, and have a long line of sight to see better pricing before they hit a debt wall. If pricing does improve as I have repeatedly stated it will, then this will become moot. If it doesn’t…. you can probably finish this sentence. 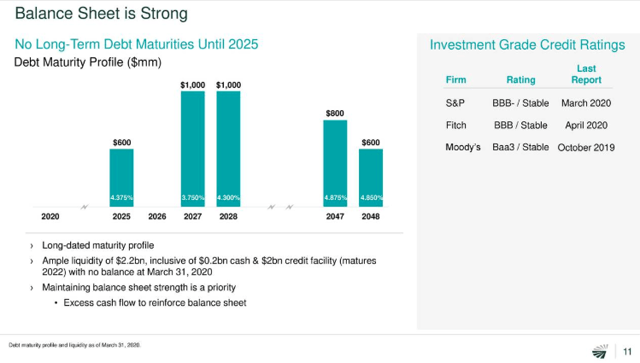 A couple of hundred million in cash and untapped $2 bn credit line keeps them in the black for a long period. It should be noted that if the company doesn’t maintain a Moody’s “Ba2,” or “BB” from S&P, will cause a First Lien on the oil and gas properties owned by the company. These are already backed by subsidiaries of the company. 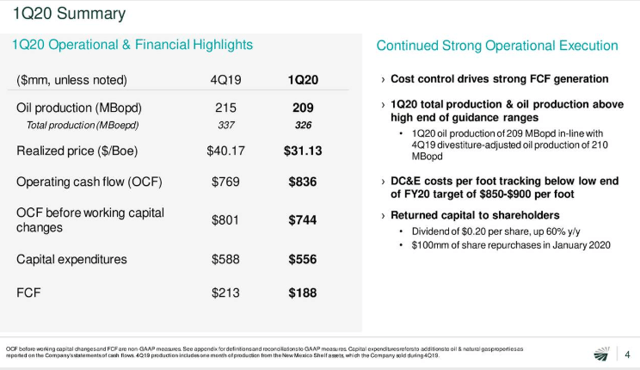 They have pulled the only lever within their control, capex to reduce cash burn and generate free cash. They have about 10K BOPD shut-in which reduces daily crude runs to about 199K BOPD. 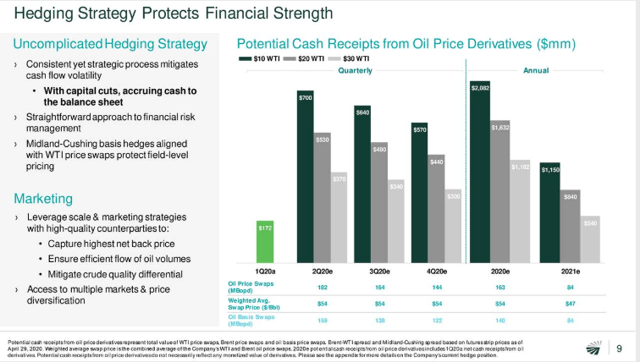 With about 60% of their 2020 daily production hedged at $54 CXO is insulated from wide swings in market prices for WTI. Tim Leach, Concho’s CEO comments-

While our hedging strategy serves us well in today’s environment, our hedges are intended to protect our cash flows and balance sheet from commodity price volatility and not to justify investments or production decisions.

They are subject to market vagaries on the rest of their production though, and lower oil prices would hit their bottom line.

Tim Leach, CEO of Concho singled out four guiding principles for the company in the last call-

We continue to respond to what the market is telling us through low oil prices. So we’re further reducing our capital spend rate. We spent roughly $550 million in the first quarter and plan to spend around $1 billion in the remaining 3 quarters of the year as we focus on 4 priorities. First, optimizing our cash flow by adjusting our spend rate, production and cost structure. Second, maintaining a strong balance sheet. Third, continuing to return capital to shareholders through our dividend. And finally, maintaining flexibility to cut further while also preserving our operational capacity.

Now we’ve heard that from CEO’s before, most notably Vicki Hollub over at OXY, and we all know how that turned out. One difference is CXO’s dividend is funded by free cash flow. With a payout ratio of 29.43% CXO has a considerable buffer to fund and increase the dividend (when market condition warrant) without resorting to borrowing. With 195.2 mm shares outstanding and a quarterly obligation of $0.20 per share, for a total quarterly obligation of ~$39 MM, there no threat to the dividend or ongoing $1.5 bn share repurchase program. Compare that to the mouthings of Shell and BP! Investors can sleep well at night waiting for the check to arrive in the mail.

READ ALSO  Stimulus Quality, Not Size, Will Matter for Markets

Goldman Sachs, Wells Fargo, and B of A, have all put buy recommendations out for Concho. Links are provided for your review.

Insiders have not been buying the last three months. Read into that what you will. Open market insider buys are often construed as confidence in the companies future, sometimes making a statement for the market.

Folks, CXO looks like a diamond in the rough compared to much of its competition. They know who they are and what their mission is, unlike our former star Euro oil companies. They deserve a spot on the buy list.

Cost control is the name of the game right now and the company is twisting all the right knobs-cutting capex by 40% vs original plan for 2020, dropping rigs and frac crews-a consequence of reduced capex, and looking at ~$100 in G&A cost reductions, to keep costs line with prices.

Currently selling at a forward PE of ~20 that’s actually not bad compared to many companies out there. Again comparing favorably to the big Euro guys. But, the question is, should we jump in or wait? For reference, fellow midcap, Diamondback Energy, (FANG) is trading at a 18.5 forward multiple to EPS.

The market has been doing some consolidation after a pretty amazing run. This consolidation could be coming to an end, and equity prices moving higher, driven by reduced oil storage volumes expected as we go through the year. If the result of the prior week ending July, 10th are repeated with a draw anywhere near the ~7.5 mm bbls reported, then the window to get CXO at a discount could close quickly for the near term.

We like the larger cohort group of large cap shale drillers and think that CXO is a buy at current levels. Savvy investors might discount the current price a few dollars depending on news impacting the oil price on a daily basis, and the earnings report due on July, 30th. It’s a risk either way. 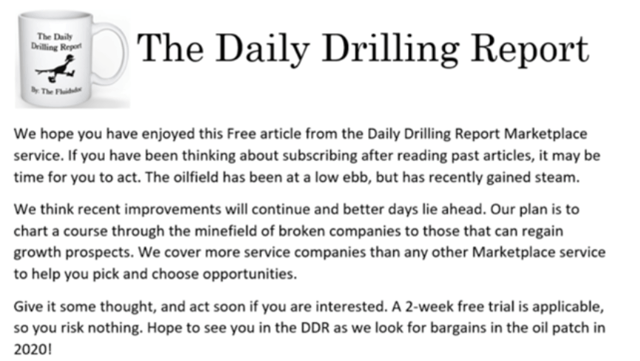 Additional disclosure: This is not advice to buy or sell this stock. I am not an accountant or CPA or CFA. This article is intended to provide information to interested parties and is in no way a recommendation to buy or sell the securities mentioned. As I have no knowledge of individual investor circumstances, goals, and/or portfolio concentration or diversification, readers are expected to do their own due diligence before investing their hard-earned cash.