Commerce Is Not War 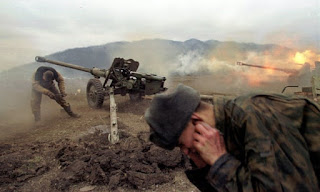 A Don Boudreaux letter to a new correspondent, Ricky Miller:

You describe my support of unilateral free trade as support of “unilateral disarmament,” and you give as an example the alleged “danger of keeping our tariffs low when other countries keep high tariffs on US goods.”

First, the charge that free traders advocate “unilateral disarmament,” although common, is completely inappropriate. Our government (ostensibly) maintains military readiness to protect us from being killed by bullets and bombs that foreigners force on us violently. In contrast, our government maintains tariffs to deter us from being enriched by goods and services that foreigners offer to us peacefully.

Tariffs and other such ‘economic armaments’ are weapons aimed at one’s own citizens. Far from offering protection against foreign aggression, tariffs are by their very nature weapons of domestic aggression used by each government to injure most of its own people in order to bestow unjust privileges on a few.

Second, suppose that (say) the Chinese government were to protect select Chinese producers not with tariffs but, instead, by confiscating  from the Chinese people, each December 31st, 20 percent of all goods that they purchased from abroad during the previous year. Given that the protective effect of this policy of outright confiscation is identical to that of tariffs, do you believe that this Chinese-government practice of stealing its citizens’ property would justify – economically and ethically – a like policy of Uncle Sam stealing each year 20 percent of the goods that we purchase from abroad? If you really are convinced that foreign-governments’ tariffs on their citizens justify U.S. government tariffs on Americans, your answer should be ‘yes’ – a fact that ought to cause you to reconsider your opposition to a policy of unilateral free trade.