Despite ever-increasing numbers of COVID-19 infections, stock markets remain near their highs. COVID-19 seems to have lost its horror for investors. Thus, the big upcoming stock market crash appears to have been exhausted in the crash of February/March 2020. I no longer assume that COVID-19 infections alone will cause investors to hit the brakes and pant towards the exit. However, the coronavirus has shown how quickly extreme events can sweep over the world as black swans and overturn facts believed to be true. Given its nature, black swan events are, of course, things that are difficult to predict. Nevertheless, the COVID-19 pandemic may have already triggered catalysts that are already secretly causing the next stock market crash.

Stock markets are ahead

André Kostolany once compared the stock market and the economy to a dog and its owner, who both walk. Sometimes the dog runs in front, sometimes the owner. In the end, however, both reach their destination relatively simultaneously. Currently, the markets have a confident lead over the economy with their prices near their all-time high. If we stick with the picture painted by André Kostolany, the stock markets are currently taking a short break.

If we look at the individual countries’ economies, the recovery has somewhat come to a standstill. In some states, activities have declined again, as in Canada, the U.K., and Sweden. But even the slightly more successful US economy is still 20 percent below the activity at the beginning of the year. The discrepancy with the US American indices is apparent here. 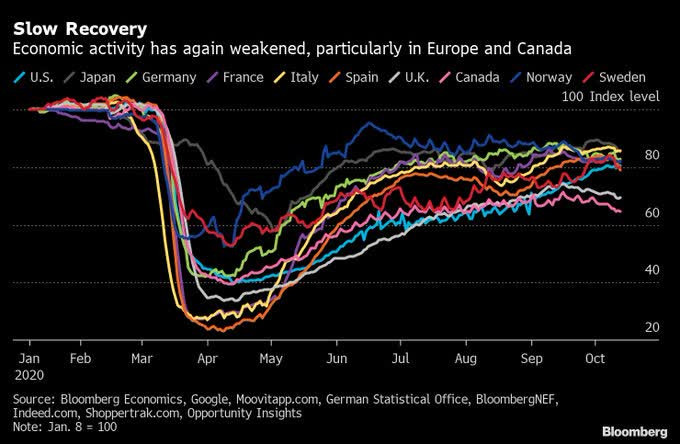 So we have an economy that is lagging behind the stock markets. The crash of the economy in February and March and the second quarter of 2020 has torn a massive hole in growth that first needs to be plugged. If we look at the gross domestic product, it will take at least two years for many countries to reach the pre-coronavirus level. 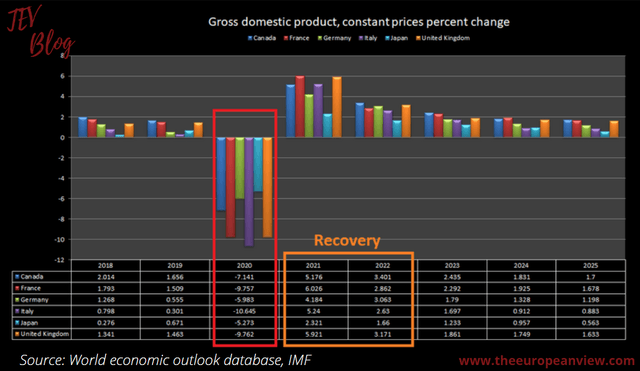 Why the stock markets keep rising

But why do the stock markets have this edge over the real economy? There are several reasons for this, and, as so often, no one can assign individual causes and their effects. However, it is apparent that a considerable amount of money is flowing into the market, and it does not look as if this cash flow will stop soon. This money comes from many sources and ensures that the demand for shares at least remains stable.

While governments worldwide resorted to bailouts of historic proportions during the crisis, hopes of economic stimulus packages have recently kept share prices high. The chart below shows that the international bailouts by governments of the G7 states in 2020 were the largest in history, resulting in a very high debt burden that has now reached almost three times GDP.

Source: Largest Bailouts in history vs. G7 debt to GDP

The problem is that markets have risen not because of a better economic situation but because of the prospect that the state will pour money over the economy with a watering can. Of course, this will be reflected in the companies’ business performance – the money has to go somewhere. Nevertheless, there is the problem that these packages cannot do more than keeping the patient alive for the time being. They ensure that the economy is halfway running, that the companies have a business, and can continue to pay their employees. The employees can, in turn, spend the money on consumption. The cycle remains intact, which is a good thing if it can prevent pain and suffering for workers, families, and individuals. But what consequences this can have for stock markets, I will describe below.

managed with the aim of maintaining a highly stable asset base through liquid investments. These include cash securities and bonds with a term of less than 12 months. Although private retailers also have access, they are only a minority. The money market fund market is dominated by institutional investors, i.e. banks, insurance companies, and governments. Thus, players that have the most idea (or so they think).

Although net assets’ value is still extremely high compared to the pre-COVID-19 period, they are declining. Every month cash flows out of these funds, and the money may fly into the stock markets. It is also quite possible that just the prospect of so much money on the side is enough for a certain euphoria among investors.

Everyone has money and time to invest

Besides, there is also a great demand for shares on the part of private investors who, with the help of discount brokers and fueled by rising prices, can pump money into the stock markets as quickly as never before, which makes the perfect scenario for a self-fulfilling prophecy:

Cheap brokers with almost free trades, a sizeable blogging scene with investors who mantra-like promise early retirement if you only buy stocks regularly, have, in my opinion, created the perfect mixture for a bubble. Besides, after years of waiting for the next crash, there is a great fear of missing the next rally. Whether private households can move the market in this way is, of course, not clear and difficult to prove. But it cannot be ruled out

From which direction could the next Black Swan come?

Well, I can’t predict the unpredictable – no one can. Nevertheless, I do have some thoughts about the fundamental development. And there I see a relatively concrete catalyst, which does not have to trigger a crash necessarily, but from which in turn other (unexpected) events can emerge. The lockdown of many increases in the first and second quarters and the now resurgent lockdown waves in parts of the world (such as Europe) are causing the world’s progress to a standstill.

In such a world, it is not about growth but preservation. Accordingly, many government support programs are aimed at absorbing the losses of companies affected by the lockdown.

In such a scenario, companies do not invest in future growth. They save, they secure credit lines, and keep the money together. You can see that in many aspects. For example, the volume of transactions with US target companies fell rapidly and has not recovered despite the easing of the summer lockdown. 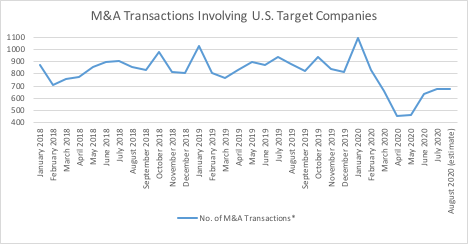 In fact, from an owner’s perspective, why should an owner of a small-cap or mid-cap company invest now with the money he or she earned himself (i.e., not with borrowed capital)? The problem I see here is that an economy that, to a large extent, does not invest, but maintains, will eventually wear out. Of course, this also impacts companies that have come through the crisis exceptionally well, such as FANG shares. In the end, however, these companies live from their customers’ spendings. But the customers in turn live from their jobs. But the jobs are currently dependent on the printing presses of the central banks. However, in the medium term, jobs depend on the economy remaining competitive, companies investing in future growth, and the economy not being financially overindebted.

This aspect stated above could be entirely overlooked by the market and not yet priced into the markets, which could result in quite a large valuation gap. However, this alone is probably not enough to cause a crash, and this is where the new black swan event comes into play, which tears open this gap and reveals it to all investors. As I said, I also do not know what this swan looks like, but it is possible that, in the end, it comes from the direction described above. And perhaps it is even a second major lockdown that causes the markets to crash again. While this would be less surprising, as a rise in COVID-19 infections was predictable during the fall and winter, investors may have underestimated the speed of the new wave.

Nobody can say how things will develop, but it would still help to stick to certain principles. For example, I would not use the current situation as a justification to buy excessively overpriced shares. Things like “Today everything is different”, “It will go on like this for the time being because interests are low,” should be removed from your thoughts. I don’t want to become fundamental. But it sometimes seems that many investors no longer look at fundamental data. They see a company, and in the very best case, they ask themselves whether the company is operating in a growth market. After that, they only look at the price and ask themselves, “Will the price rise shortly?” In my opinion, however, this is an entirely wrong approach.

Source: One of Warren Buffett’s most valuable thoughts

Especially in the current phase, I get a stomach ache when I invest in rising stock markets. When I invest, I, therefore, pay special attention to the following aspects:

Focus on profit and cash flow

I look more closely than usual at the cash that companies either generate or on which they sit. The ability to pay dividends from cash flow and profits and not reduce the payout for many years indicates strength. Below I have listed a few companies that will go ex-dividend over the coming week. However, it is also important here that you are not blinded by high returns.

I use the family-owned criteria

Furthermore, I like to use the family-owned criteria. Of course, it is no guarantee if its founding family or the founder runs a company. However, this characteristic often correlates with a long-term approach. There are also indications that such companies are performing better overall: 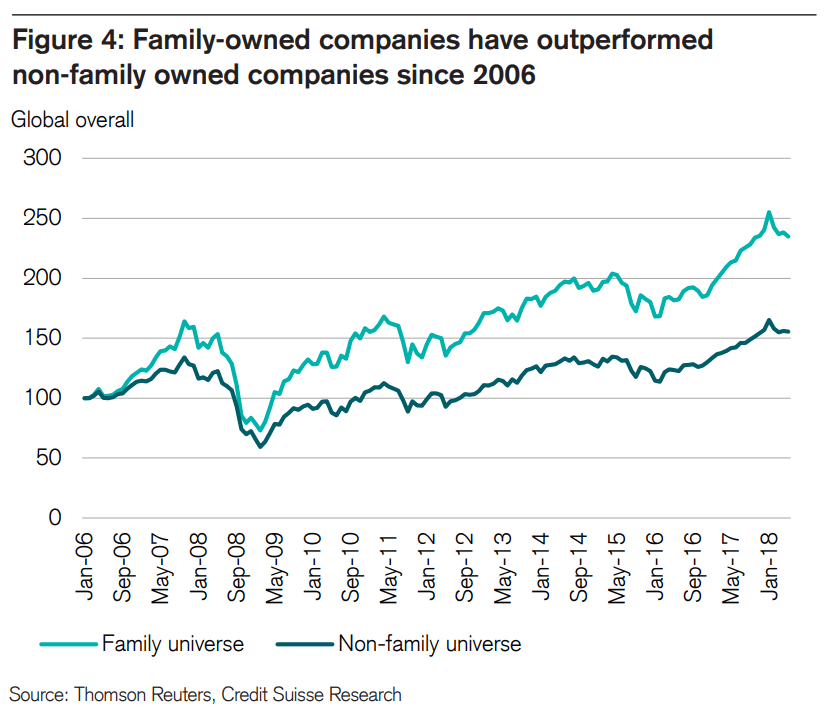 Think therefore like an entrepreneur who runs his own business. You want to live from the business, it should feed your family. Therefore, it is important to invest in profitability, moats, and growth markets. Quick deals with any half-insolvent huts such as Hertz Global Holdings (HTZ) are therefore dead-end for me.

Value investing is not dead

I also pay attention to the price at which I acquire ownership of companies. My answer to the question of whether value investing is dead is, therefore, a clear “no”. The performance of Procter & Gamble (PG), Walmart (WMT), and Microsoft (MSFT) shows that it can make sense to buy shares in companies where the market is in doubt and which are therefore fundamentally undervalued. It, therefore, makes no difference whether prices collapse by 10, 20, or 30 percent in the next crash. What will remain decisive is the ratio of the value and the price of a share.

Cisco (CSCO) is a good example of a company that is currently not really loved by the market. However, it is nevertheless active in growth markets and increases profits, cash flow, and sales in the long term. A small dry spell has led to a drop in valuation. I hear the same arguments as I heard back then at Microsoft or Procter & Gamble. In the end, these are the best buying opportunities in the long run. 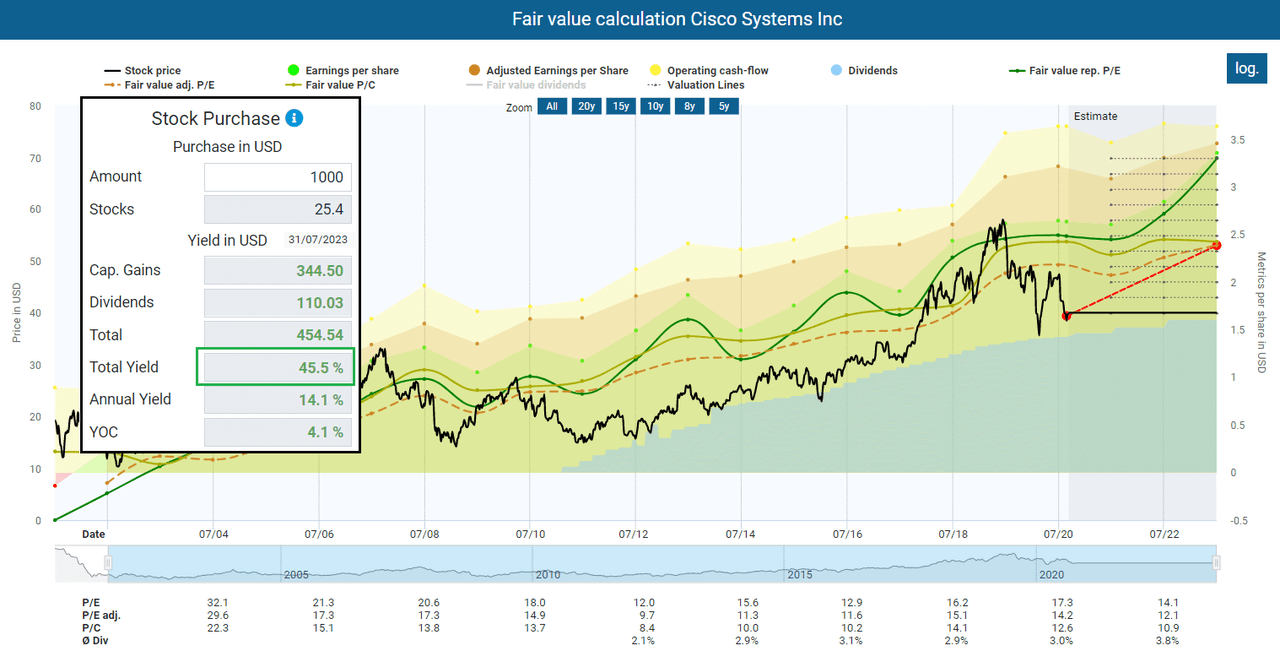 After SAP SE (SAP) had to lower its outlook due to the COVID-19 crisis, it may be a value play as well: 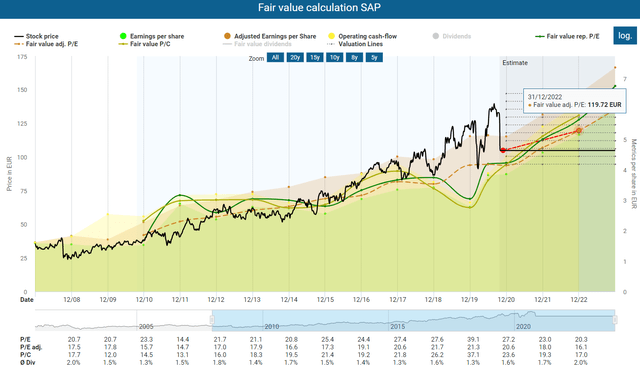 Overall, those who are picky with these criteria and do not blindly buy everything that has risen so far will undoubtedly come through the next crash well in the long run. Nevertheless, given the current situation, I would still expect very high volatility.

Some companies named in this article are part of my diversified retirement portfolio. If you enjoyed this article and wish to receive other long-term investment proposals or updates on my latest portfolio research, click “Follow” next to my name at the top of this article, and check “Get email alerts”.

Disclosure: I am/we are long SEVERAL STOCKS MENTIONED ABOVE. I wrote this article myself, and it expresses my own opinions. I am not receiving compensation for it (other than from Seeking Alpha). I have no business relationship with any company whose stock is mentioned in this article.