Cocoa Futures Roll To December- Another Correction Is Likely To Lead To A Higher Low (NYSEARCA:NIB)

Home Financial news Cocoa Futures Roll To December- Another Correction Is Likely To Lead To A Higher Low (NYSEARCA:NIB)
2020-08-212020-08-21By finanz.dk

Cocoa futures on the Intercontinental Exchange rolled from September to December futures. During roll periods, prices can become highly volatile as market participants transfer risk from one active month contract to the next or choose to exit or enter positions. During the September-December roll, the cocoa futures market has corrected from the August 10 high at $2559 per ton, the highest price since mid-March. On that day, cocoa put in a bearish reversal on the daily chart as the price rose to a new five-month high and closed below the previous session’s low. Since then, the price has been correcting to the downside.

Cocoa had rallied for three consecutive weeks, but over the past two weeks, the price has slipped. Cocoa could be heading for a higher low as the price has been in an overall bullish trading pattern since 2017 when it found a bottom at $1769 per ton.

I last wrote about the cocoa market on Seeking Alpha on August 5. On that day, the new active month December futures settled at $2473 per ton. Since then, the price rallied to a high of $2535 on August 10 but corrected to just over the $2400 level on August 20.

In June 2017, the price of nearby cocoa futures on the Intercontinental Exchange has been in a bullish trend. 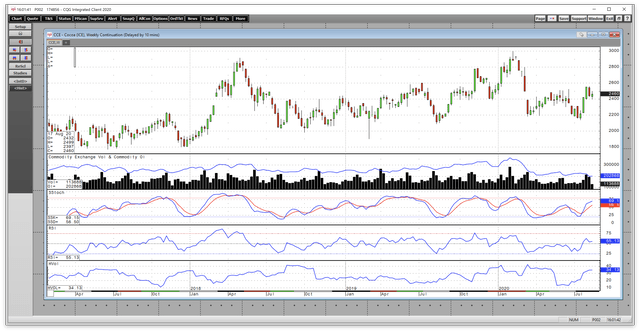 As the weekly chart highlights, cocoa has made higher lows and higher highs since the June 2017 bottom at $1769 per ton. Price momentum and relative strength indicators were above neutral readings on August 20. Open interest, the total number of open long and short positions in the cocoa futures market had been moving steadily higher but dropped because of the global pandemic. After reaching a high of over 365,000 contracts in early February 2020, the metric dropped to below 203,000 on August 19, a decline of 44.5%. Weekly historical volatility at 34.13% was far above the 2020 low at 13%, but below the peak for the year at 42.2% in mid-March when risk-off conditions hit most markets.

The price of cocoa has been trending higher over the past three years.

A falling dollar is supportive of cocoa

The dollar is the world’s reserve currency and the benchmark pricing mechanism for most commodities. A strong dollar tends to weigh on raw material prices. When the dollar weakens against other foreign exchange instruments, it is often highly supportive of commodity prices. The dollar has been falling steadily since March when it reached an eighteen-year high. 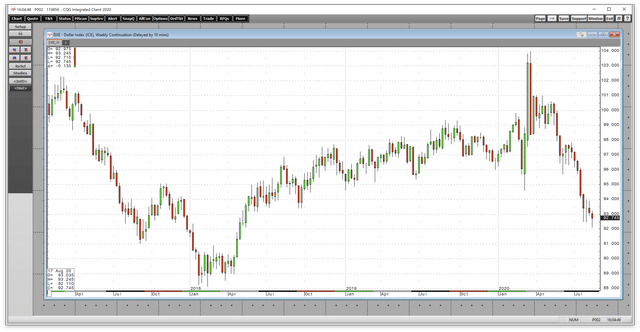 As the weekly chart illustrates, the dollar index reached its most recent low of 92.110 this week, which was the lowest level since April 2018. The index fell below its technical support level at the September 2018 low of 93.395. Currencies tend to trend for long periods, and the dollar’s bearish path seems likely to continue.

Meanwhile, the British pound versus the US dollar currency relationship often impacts the price of cocoa. Since London is the international hub of physical cocoa trading, many supply contracts use the pound as a pricing mechanism. A rising pound is often bullish for the price of cocoa futures. 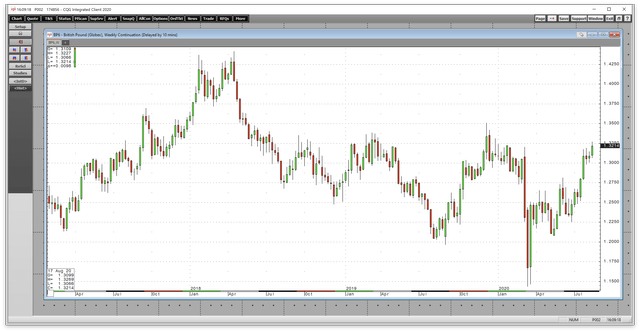 The weekly chart shows that the pound rose from a low of $1.1438 in mid-March to its latest high of $1.3269 this week, a gain of 16%. The rising pound is a bullish factor for the price of the soft commodity.

London is the center of international cocoa trading because of its geographical proximity and shared time zone with the world’s leading producing nations. Over 60% of annual cocoa bean supplies come from the Ivory Coast and Ghana. Cocoa requires an equatorial climate, making the West African countries the critical suppliers to chocolate lovers worldwide.

The global pandemic wreaked havoc in Europe and the United States in 2020. When it comes to African countries, medical technology and reporting are not up to the same standards. The number of cases and fatalities from COVID-19 are likely significant in the IC and Ghana, impacting the annual crop and the logistics of transporting cocoa beans from farms to ports for exportation.

At the same time, the demand for cocoa beans is a function of global demographics. According to the US Census Bureau, the world’s population grows by approximately twenty million each quarter. The addressable market for chocolate confectionery products and other food that require cocoa beans is an ever-rising factor when it comes to the fundamental equation for the soft commodity. With the demand side expanding, supplies must keep pace. The uncertainty of the impact of coronavirus on West African producers creates volatility in the cocoa futures market.

Scale-down buying in cocoa could lead to optimal results

The September futures cocoa futures contracts on ICE have rolled to December. During the roll period, volatility tends to increase because some market participants opt to exit risk positions. At the same time, producers and consumers often close hedge positions. 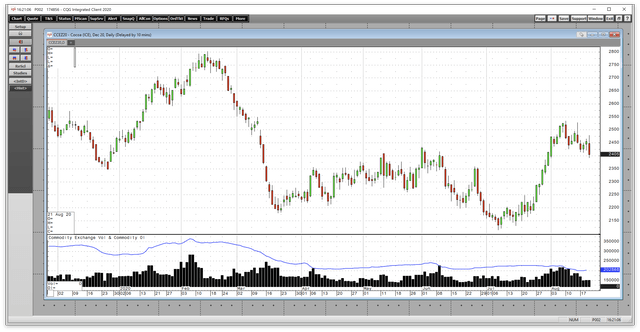 The chart of December futures illustrates the decline in open interest during the roll period. December cocoa reached its most recent peak at $2535 per ton on August 10, where it ran out of steam on the upside. On August 20, the cocoa market put in a bearish reversal on the daily chart when it made a higher high than the previous session and settled below the prior trading day’s low. The bearish pattern could lead to a deeper correction in the cocoa futures market, which I would view as a buying opportunity. I favor a scale-down approach to accumulating a long position in cocoa in the current environment. The first technical support level should be around the $2358 level, the high from June 25. Below there, $2115, the July 8 low, stands as the downside target for the soft commodity.

Cocoa often trades in a wide range, so I would leave plenty of room to add to long positions if the price continues to decline. On the weekly chart, the August 2019 low at $2089 per ton is the critical technical resistance level. Resistance is at $2535 per ton, the recent high.

I believe that cocoa, along with most other commodities, will head higher over the coming months and years. The falling dollar, low interest rates, and unprecedented levels of government and central bank stimulus are highly inflationary. During the 2008 global financial crisis, cocoa fell to a low of $1867 per ton. In 2011, the price rose to a record high of $3826 alongside most other raw material prices that reached multiyear or record levels on the upside. We could see a similar trading pattern in commodities over the coming months and years.

NIB is the cocoa ETN product

The most direct route for a risk position in the cocoa market is via the futures and futures options on the Intercontinental Exchange. For those looking to participate in the market without venturing into the futures arena, the iPath Bloomberg Cocoa Subindex Total Return ETN product (NIB) does an excellent job tracking the price action in the soft commodity. The fund summary for NIB states: 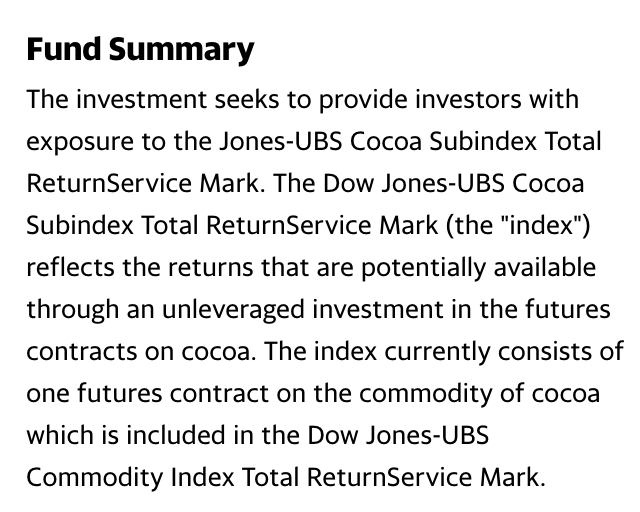 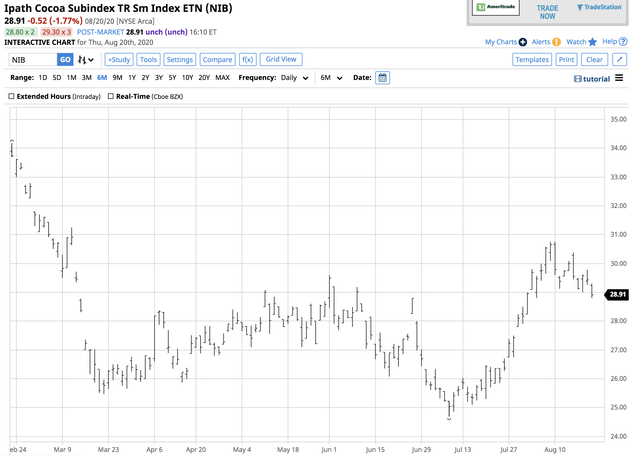 Over the same period, NIB appreciated from $24.69 to $30.75 per share or 24.5%. The ETN outperformed the action in the cocoa futures market over the period.

The weakening US dollar, rising demand for cocoa beans as a function of population trends, and the uncertainty of supplies from the Ivory Coast and Ghana should support the price of the soft commodity. If the price action from 2008 through 2011 is a model for the coming years, we could see the price of cocoa futures rise significantly.