CMS Energy: For Conservative Investors, As Dionne Warwick Sang, ‘Walk On By’ (NYSE:CMS)

CMS Energy (CMS) is a Michigan-based multi-utility servicing 1.8 million electric customers and 1.8 million natural gas customers. Over the past several years, CMS has provided investors with more than adequate returns. However, the stock has historically been pricey, the regulatory environment is iffy, and these may be reflected in muted future returns. While CMS is categorized as a large-cap value investment, there are better “value” opportunities in the utility sector.

CMS Energy is a one-state utility serving Michigan. Its service map below indicates the company covers large geography of the state and according to its website, supplies gas and electric to 67% of the state’s population. 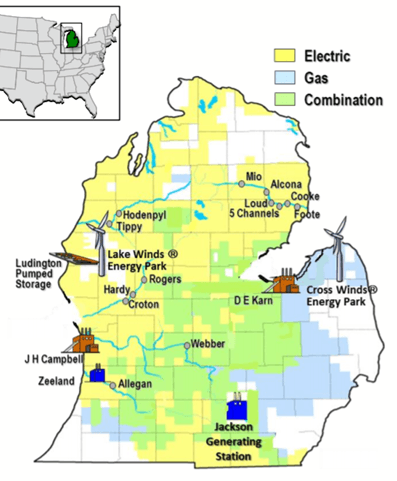 Also, of concern is the decision by the current Michigan government to file legal challenges to permanently cease operating a 67-year-old pipeline at the bottom of the Straits of Mackinac. Line 5 is part of a network that delivers oil from western Canada throughout the eastern US, including refineries in Michigan, Ohio, and Ontario. The pipeline is also the primary source of propane in the Upper Peninsula. According to news source bridgemi.com, the previous administration approved a plan to replace the section of Line 5 that sits on the lake bottom with a deep tunnel under the lakebed and the current section of pipeline would remain operational until the new tunnel is in service. However, this previous agreement was discarded in favor of the legal maneuvering to cancel the existing granted easement, with partial justification being the pipeline should have never been approved and built almost 70 years ago. Of concern to utility investors should be the heightened risk of increasing judicial interventions overturning previous utility agreements that may be damaging to the financial health of the utility.

CMS Energy is growing its rate base through massive investments in its infrastructure. From 2020 to 2024, management has outlined a $12.5 billion capital investment plan to improve electric distribution, natural gas pipe replacement, and additions to solar and wind power generation. Roughly 45% of the current capex budget is earmarked for electric utility operations including existing generation, 41% for natural gas utility operations, and 14% for new renewable power generation. Management has proposed a $25 billion 10-yr outlay, which continues a $2.0-2.5 billion annual investment that has been in place since 2015. Management has set a goal to be net carbon neutral by 2040 through the closing of its coal-fueled power plants and expanding its renewable footprint. Of interest to investors should be the extent of capex spent on replacement of aging infrastructure, such as leak-prone gas distribution lines. While the total rate base is expected to expand from $17.5 billion in 2019 to $24.5 billion in 2024, the current capex budget is only 60% pre-approved for inclusion into the rate base.

CMS Energy has retained a net operating loss carryforward as the result of impairment charges of $4.80 per share taken from 2005 to 2007, combined with renewable power tax credits. According to Morningstar, currently these amount to $2.6 billion in outstanding tax credits. According to Dec 31. 2019, quarterly earnings conference call, management stated they do not anticipate paying federal income taxes until at least 2024. This is goosing up operating earnings, but if a revised federal corporate income tax plan is enacted, including a minimum federal income tax, earnings could get a hit. According to the company’s Sept 2019 presentation, while CMS pays an effective tax rate of 16%, each 1% increase in its tax rate equates to a $0.03 decline in earnings per share. With the combination of a rise in federal corporate tax rates and the expiration of NOLs, regulators could be pressed to raise utility rates as an offset.

Electric utilities may be preferred by investors due to the nationwide push for renewable energy build-out and an anti-natural gas sentiment growing in the US. I believe there is a bigger issue with the utility sector dealing with the strong potential for an uptick in inflationary costs and operating expenses. If inflation ticks higher, driving up the cost of utility operations, and with higher corporate taxes on the horizon, utilities, in general, will be requesting higher rates to offset these negative impacts on profitability. Keep a close eye on individual state’s regulatory environment as will be critical for utility investors over the next few years.

Conservative utility investors should review those stocks listed in the June SA commentary for companies serving states with better regulatory environments than Michigan. Not only are there utilities with improved regulatory environments, but they also offer better stock valuations and higher current dividends. If the sector is on the cusp of a tectonic shift in inflationary operating costs and increasing tax liabilities, investing in the best states for regulatory environments is strongly advised.

Author’s Addendum: Dionne Warwick is one the best vocal artists of the Easy Listening genre, but unfortunately, her modest elegance and style get overlooked by the more well-known ‘divas’ of that era, such as Aretha Franklin and Diana Ross. Written by the songwriting team of Bert Bacharach and Hal Davis, Walk On By is about a woman asking her former lover to leave her alone. Released in 1964 and originally designated as Side B, Bacharach believes Walk On By is the first time he paired two grand pianos on a contemporary studio recording. The YouTube video of the song, possibly from the mid-1960s British network tv show Ready, Set, Go, features Warwick and dancers “walking on by”. Enjoy the trip down Easy Listening memory lane.