Street consensus per IBES data by Refinitiv is expecting $1.196 billion in revenue to generate $1.62 in earnings per share for y/y declines of 6% and 8%, respectively.

The worse news is that – exiting the April ’20 quarter – the Street was looking for $1.82 per share on $1.3 billion in revenue, so the cuts to the forward estimates haven’t been kind.

Here is the trend in CME’s EPS and revenue estimates:

It worries me a little bit that 2021 EPS and revenue estimates the last two quarters have turned negative, which makes some sense since interest rates are back to close to zero (Fed funds through the 10-year Treasury yield, anyway) which is CME’s largest contract by volume.

It’s geeky stuff but readers can see the exchange volume by contract, the percentage of revenue each contract represents and then y/y growth.

Bitcoin and micro S&P 500 futures are new contracts that generated some nice public relations for the exchange when they launched, but don’t seem to be moving the needle yet.

Readers can see the influence on the interest rate contracts on the exchange, and you’d expect them (interest rate volatility) to be dead money until at least the Presidential election.

CME’s performance relative to the S&P 500: 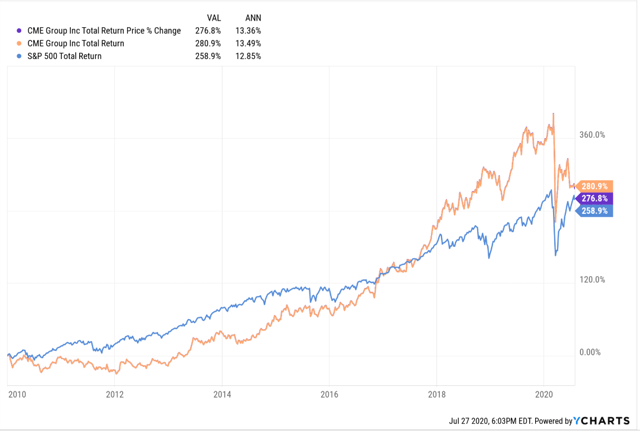 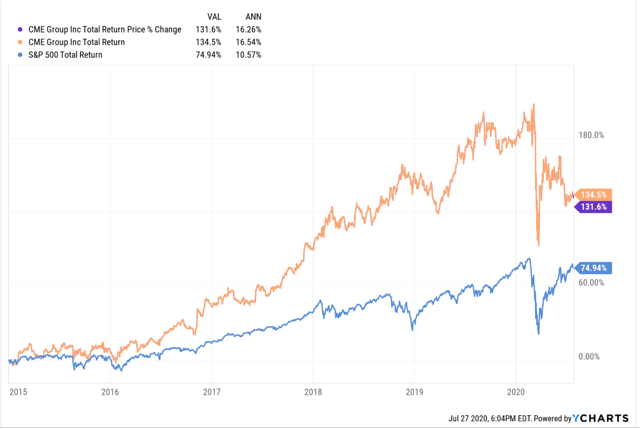 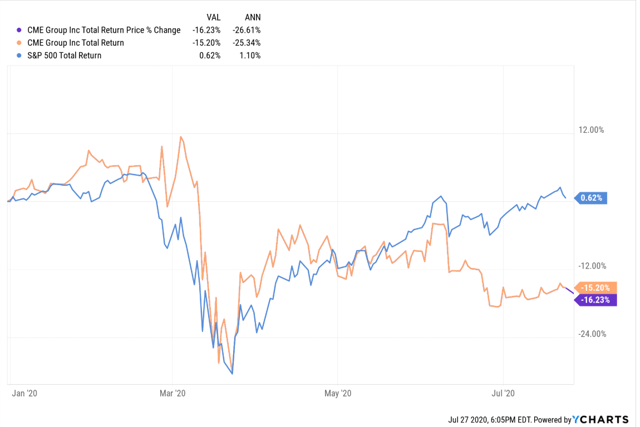 Summary/Conclusion: Sometimes a stock’s “story” is pretty simple and investors are stuck until the capital markets change, and with 50% of CME’s volume being interest rate (Treasury contracts) and the Fed and monetary policy screwing Fed Funds and the rest of the Treasury curve down to zero once again (just like from 2008 to 2016), it makes for little volatility across the Treasury curve and hence little need to hedge that risk.

Commodities, maybe equities, maybe even forex, might see some increases in volume, particularly with the strength in the euro and the euro bailout package, but all that still pales in comparison to Treasury volume.

The one surprising aspect to Covid-19 and the last 4 months is that ‘core inflation is actually starting to tick up despite the Q2 ’20 GDP looking at 20% decline and an unemployment rate closer to 15%, but so far the 10-year Treasury yield at 60 basis points tells us that no one owning Treasuries is worried about inflation.

CME is a 2-2.5% position in client accounts and has been owned for years, since it went public in late 2002, and a technician friend of mine who had a seat at the CME asked me to take a look at the stock fundamentally.

A trade below $160-161 or the June lows would not be a good sign, and that might trigger more selling/liquidation.

CME was a 30% ROE (return on equity) generator from 2002 through 2007 and then it fell apart after 2008, thanks primarily to flat interest rates. The CME bought the NYMEX and its global oil complex but it sank the ROE and really didn’t do much for the exchange overall.

Volume really is the key to CME. Readers can see when volume exploded in Q1 ’20, the operating income margin expanded from 60% to 70% but the market interpreted it correctly that the volume surge was temporary, and the stock didn’t bounce very much.

Over the years, management has shown decent expense and margin control but the key to CME is interest-rate volatility, and I’d expect very little will happen with that until at least the Presidential election, November 3, 2020.

As the capital markets stand today, the stock is fairly valued in the $160s, low $170s.

Disclosure: I am/we are long CME. I wrote this article myself, and it expresses my own opinions. I am not receiving compensation for it (other than from Seeking Alpha). I have no business relationship with any company whose stock is mentioned in this article.