Office REITs continue to trade well off their levels from earlier this year. In this article, I’m focused on City Office REIT (CIO), whose share price has declined by 44% since the start of the year. While City Office carries headline risk around the state of office real estate during the pandemic, I believe the current valuation is largely unwarranted. In this article, I evaluate what makes the stock an attractive buy at the current valuation, so let’s get started.

A Look Into City Office REIT

City Office bills itself as a focused landlord of office properties in so-called ’18-Hour Cities’. This is a play on modifying the term ’24-Hour Cities’, which refers to major metropolitan areas such as New York City, Chicago, and Los Angeles. The core market for City Office is secondary cities that are large, yet not as densely populated as the tier-1 cities. It currently has 65 properties located in the metropolitan areas of Dallas, Denver, Orlando, Phoenix, Portland, San Diego, Seattle, and Tampa. Here is a snapshot of their geographic footprint:

What I like about City Office is its niche strategy of focusing on urban areas that are not Tier-1. I see this as being a “sweet spot” for the REIT, as this strategy helps it to avoid a competitive bidding process with the “big boy” REITs in major MSAs (metropolitan statistical areas). At the same time, CIO focuses on core markets that have educated workforces, diverse employment bases with national and international employers, sound transportation, and low-cost operational centers.

As seen below, the following map shows solid population increases in CIO’s core markets (from July 2017 to July 2019). Based on SNL Financial data as of Aug’20, CIO’s markets are expected to exhibit nearly double the national rate of employment and population growth between now and 2025.

The latest Q3 results show that CIO is weathering the current environment rather well with strong fundamentals. Its Core FFO grew by an impressive 21% YoY, to $0.35. It also managed to reduce its leverage ratio, from a net debt to EBITDA of 6.6x at Q3’19 to 6.4x in the latest quarter, with 89% fixed-rate debt. Quarter-end occupancy ticked up on a YoY basis to 93.1%, and 99% of third quarter and October rents have been collected. I’m also encouraged by the strong leasing activity on its Sorrento Mesa property in San Diego, California. CIO executed 136K in new and renewal leasing on this property, which represented 72% of total leasing activity during the quarter. 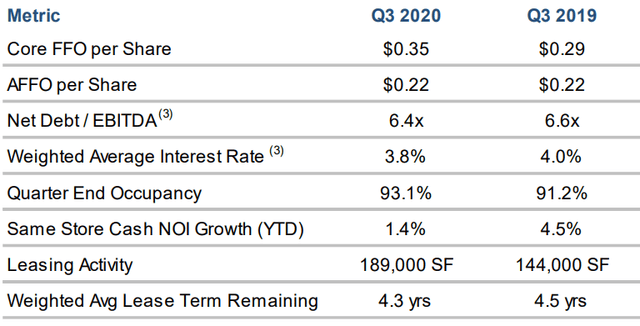 Looking forward, I expect CIO to continue executing well during the challenging macroeconomic environment. This is supported by management stating that CIO’s markets are performing better than Tier-1 gateway markets from an employment standpoint, as noted during the recent conference call:

It is noteworthy that our cities have been some of the strongest performers. The number of employees on non-farm payrolls nationally declined 6.7% in September 2020 relative to September 2019. Gateway markets have seen an even greater employment reduction year-over-year at a 9.3% decline. In City Office’s markets, employment has held up much better experiencing an average decline of 5.3%. We’re encouraged that our markets continue to benefit from strong relative employment trends.”

The market, however, seems to have overlooked the idea that CIO’s properties may be better positioned to weather the current environment than its Tier-1 focused peers. For this, I compare CIO’s share price performance against that of Boston Properties (BXP), which owns properties in major gateway markets. As seen below, CIO has underperformed BXP by 7.5% since the start of the year.

The key risk to CIO is the depressed utilization of its properties, which, in a recent internal survey, showed average property utilization at under 25%. This is a risk come renewal time, during which a tenant may opt to end the leasing relationship. I’m encouraged, however, by the strong leasing activity during Q3, and by the well-staggered lease maturity schedule, as seen below. Plus, new and renewal leasing activity picked up by 14% in Q3 compared to Q2.

One silver lining which I see is that the limited new construction of office buildings during the pandemic could benefit CIO in the future through favorable supply and demand characteristics for office space. In addition, social distancing practices could carry on after the pandemic, thereby minimizing the risk of office downsizing.

Turning to valuation, I’m encouraged by management raising the 2020 guidance, from a Core FFO of $1.165 (at the midpoint) previously, to $1.21 at the midpoint. This implies a forward Price to Core FFO of just 6.21, based on the current share price of $7.52. This tells me that the shares are dirt cheap, especially considering the strong fundamentals.

Management appears to also think the shares are cheap, as it completed a $100 million share repurchase program during Q3, at an average price of $8.80 per share. Meanwhile, I find the 8% dividend yield to be attractive and well-covered by Core FFO. Plus, CIO currently has a consensus Buy rating (score of 4.0 out of 5) and an average price target of $10.

City Office REIT suffers from headline risk due to its ownership of office real estate. However, its latest Q3 results show that the REIT is weathering the current crisis well, with strong leasing activity and rent collection. I see CIO as having inherent advantages through operating in low cost markets with less competition and strong growth characteristics. In the medium term, City Office could benefit from decreased new office construction during the current pandemic, and social distancing practices could result in a higher demand for office space.

Meanwhile, CIO is trading rather cheaply, despite seeing a lower reduction in employment compared to gateway markets. I see the shares as being dirt cheap at the current valuation, but expect continued volatility in the near term, with potential for more downside. However, now is not a bad time to buy for those with a multi-year investment horizon. Lastly, considering that CIO is a small-cap stock, appropriate position-sizing is recommended. 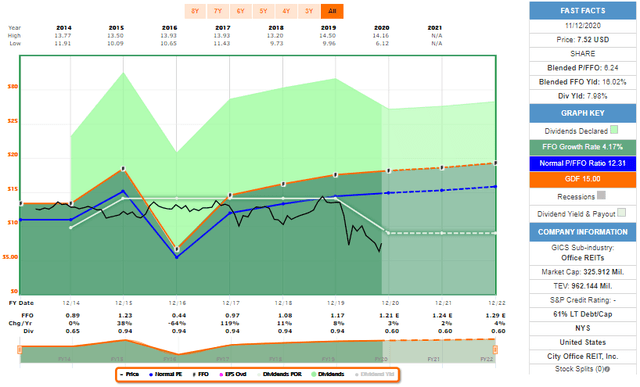 Disclosure: I am/we are long CIO. I wrote this article myself, and it expresses my own opinions. I am not receiving compensation for it (other than from Seeking Alpha). I have no business relationship with any company whose stock is mentioned in this article.

Previous Postshould I buy these 3 cheap FTSE 100 shares with BIG dividends on Friday the 13th?Next PostHighly effective people’s republic – Why self-help books are so popular in China | China