Citi’s $900m payment blunder was culmination of months of drama

When Citigroup accidentally wired $900m of its own money to creditors of the cosmetics group Revlon this month, it was a reminder that even the apparently mundane business of administering corporate loans can blow up into a reputational crisis.

Investors learned a little bit more about the cause of the error this week. By forgetting to override default settings in some software, a Citi employee trying to send an interest payment caused the loan to be repaid in full instead, according to a court filing.

Hedge funds including Brigade Capital, Symphony Asset Management and HPS Investment Partners, which received the money, are refusing to return the cash- the result of a months-long dispute over Revlon’s deteriorating finances that went all the way up to Citi chief executive Michael Corbat.

While fights between distressed debt hedge funds and companies are hardly new, the removal of traditional investor protections has made them increasingly ugly and, with coronavirus forcing companies to pile debt upon debt, increasingly frequent.

In this heated environment the administrative agents — banks charged with managing payments on a loan — are turning out to be more than neutral bureaucrats. They are forced to choose between the interests of balkanised creditors and the corporate borrowers who pay them — and from whom they hope to win more lucrative business.

Brigade, Symphony and HPS have been furious with Citi for helping Revlon, in the words of their lawsuit, “gerrymander” votes as the company sought permission to issue more debt this year.

An existing loan held by Brigade and the other hedge funds had already been trading below par almost since it was issued in 2016, as Revlon lost market share to hipper brands like Fenty and Kylie Cosmetics. Valuable assets that existing creditors might have had a claim on, including the Revlon brand name, would now be pledged as collateral for the new debt, depressing the old loan’s value further.

In April, Revlon did not have enough support from existing creditors, but it found a way: it borrowed additional money via a revolving credit facility arranged by Jefferies, temporarily swelling the number of creditors who could vote, before paying off the facility days later, according to the hedge funds’ lawsuit against Revlon, Citi and Jefferies. Citi should not have sanctioned the manoeuvre, the lawsuit alleges.

“The new revolver commitments served no legitimate business purpose; rather, they were created solely to manipulate and gerrymander voting,” the suit said.

The parties have all rejected the allegations and said they would fight the suit.

Changes to corporate debt markets lie behind the increasingly aggressive behaviour of borrowers. Large commercial banks now syndicate most leveraged loans and, with few of the loans on their own balance sheet, they have less incentive to police the market. Investor demand has also allowed companies to issue loans with few or weak covenants, which used to limit borrowers’ room for manoeuvre.

The situation is not likely to change, one financing lawyer lamented, “given what looks like a perpetuity of zero interest rates and infinite liquidity”.

So the lawsuits pile up. In recent months, disputes have broken out at mattress maker Serta Simmons Bedding, travel technology provider Travelport and movie theatre chain AMC Entertainment over refinancing deals that favour one group of creditors over another, to name just some that have resulted in lawsuits. The agent on Travelport’s loan, Bank of America, ultimately resigned.

Citi, as an agent, has found itself in the crosshairs before, though in the case of its work for PetSmart, it was the company that was angry. The private equity-backed retailer sued Citi in 2018 alleging it was holding up a corporate reorganisation by failing to release collateral from $4bn of loans, inaction that was designed to “serve the parochial interests” of a group of lenders whose securities became less valuable upon the reorganisation. The litigation was eventually settled. 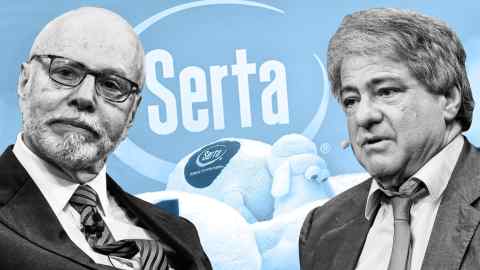 An open question is whether Citi’s $900m blunder changes the dynamics of the wider legal battle between the hedge funds and Revlon and Citi over the cosmetics group’s refinancing deal. Brigade is now sitting on $175m in repayment of a loan that had previously been valued at less than a quarter of that — but the money has been frozen by a judge.

Citi said it had got most of the cash back and was confident of prevailing over the holdouts. “All of the funds owed to Citi have now either been returned or frozen by court order,” the bank said. “We believe the law is on our side and that we will recover the outstanding funds.”

One detail in the original lawsuit brought by the hedge funds stands out following the debacle. Angry over the refinancing plan, Brigade and others asked Citi to resign as agent in April. Richard Zogheb, one of Citi’s top debt bankers, agreed and Brigade even pressed the matter with Mr Corbat, the chief executive, who — according to the suit — verbally confirmed that Citi was in the process of resigning.

The irony is obvious: had Citi indeed resigned as administrative agent in April, it would have left the now cursed August interest payment to another bank.