Cineworld: Head For The Doors (OTCMKTS:CNWGY)

U.K.-listed cinema owner Cineworld (OTCPK:CNNWF, OTC:CNWGY) doled out more bad news to shareholders over the weekend, with its estate shuttered. The shares are almost ninety percent down on year highs, but at this price, I still think they are overvalued. The company is likely headed to zero was the conclusion of The Equity Research Company back in April, and things have gotten worse since then so I also see a real risk of common shares going to zero.

The latest bad news in a terrible year from the company came in the form of a report in the influential British newspaper the Sunday Times. It said that the company would be closing all of its cinemas in the British Isles, which had started to reopen in July. The main reason given for this was the further delay of the release of the upcoming James Bond feature. Apparently, that had been expected to bring in substantial revenue, without which it made more sense to shutter the estate. Whether or not that is true doesn’t really matter; clearly, the company is in dire straits.

It had already flagged that it had going concern issues as early as its March publication of its annual report. Looking back on it now, it seems naïve. For example, in sharing its scenario planning, the company said

“This analysis does not take account of the fact that in the case of widespread site closures the films scheduled to be released during this period of closure could be moved to later in 2020. These downside scenarios are currently considered unlikely”

In fact, that downside scenario not only turned out not to be unlikely, but in fact turned out to be an upside scenario. Films were moved not only to later in 2020, but out of 2020 altogether, as with the Bond film.

The company hadn’t helped itself, with what now looks like a poorly-timed attempted takeover of Cineplex (OTCPK:CPXGF). That has now been abandoned and is the subject of legal disputes, which could yet be an additional cost for Cineworld. Additionally, the Regal chain was taken over as a turnaround candidate so was already struggling even before the hammer blow of COVID-19-related fall in demand. However, more positively, note that the U.K. and Ireland operation which has shuttered accounts only for 15% of revenue. 75% is from the U.S.A. So the overall survival chances of the company are tied more closely to cinemagoing revival in the United States rather than the British Isles.

The Balance Sheet is Groaning

The company has serious problems with its balance sheet. Most of the company’s debt matures in 2025 or 2026 and there are no substantial payments due until 2023. That makes it sound manageable. But the problem is the scale, around $8.2bn of net debt. That is a vast amount. It was already heavily indebted before COVID-19 hit and took on more debt to help tide it over, which while it has given it more life has simply increased its debt problem longer term.

It is worth noting that the company does have attractive assets. Cinemas may seem less valuable than they were pre-pandemic while there is significant uncertainty about the future appeal of going out and sitting in a room full of strangers laughing and gasping. However, while city life is enjoying a poor reputation for now, I expect cinemas will reestablish their appeal even though that may take years.

Additionally, there are trade buyers who may see great value in acquiring a multi-thousand screen estate as a distribution channel for their creative output subject to antitrust approval. Moreover, the leading shareholders in the company, the Greidinger family, maintain close to a 30% stake and so are clearly motivated to do what they can to make the most of the situation. In fact, that is one of the bright spots in this mess.

However, if the assets are sold, or the company, a lot of the proceeds will need to go to paying down the debt. Either shares go lower or they get diluted which amounts to going lower, but to see upside in them one needs to believe that cinemagoing on a large scale is coming back soon. The latest closures do not give grounds for optimism. But, using annualized figures for 2020, U.S. cinema ticket sales look disastrous. 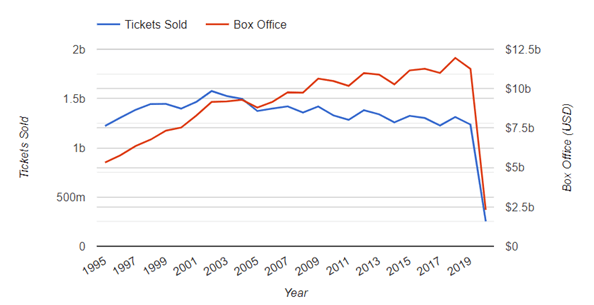 The monthly stats offer no reassurance at all. 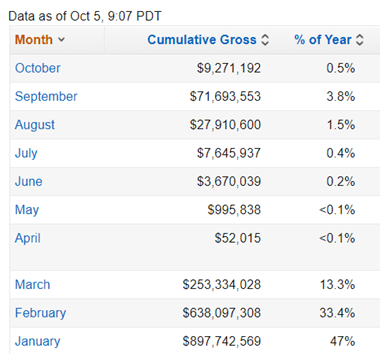 In short, the dramatic recovery in cinema admissions Cineworld needs in its main market is not showing any signs of being on the horizon.

Conclusion: Cineworld May go to Zero

Cineworld has fallen a long way already but looks a lot like a value trap. Limited or no revenues will come in in coming months, while costs will continue to pile up, and the debt pile continues to cast its long shadow.

This stock is a pure gamble now given how demand in its end markets has collapsed for an uncertain duration, not an investment opportunity which can be rationally assessed by casual investors. The risks are high and rewards are limited, quite possibly zero, so avoid.

READ ALSO  "This Is Not A Russian Hoax": 'Nonpublic Information' Debunks Letter From '50 Former Intel Officials'

Previous PostHopes fade for US stimulus with Washington in stalemateNext PostCampaign finance – Who does Wall Street back for president? | Finance & economics