I first evaluated Cimarex Energy Company (XEC) a few years ago and concluded it was mainly a natural gas producer, a sector suffering from oversupply and low prices. The company even quantified its reserves in cubic feet of gas equivalent (a gas measure) instead of in barrels of oil equivalent (an oil measure). But, like Cabot Oil & Gas (COG), Cimarex has persevered through low gas and natural gas liquids (NGLs) prices. Unlike Cabot and some others, Cimarex has also successfully added oil production, which is now over a quarter of its output.

After the twin spring 2020 disasters of steep coronavirus demand contractions and a Saudi-Russia price war, Cimarex took non-cash impairment costs of nearly $1 billion for the quarter and $1.3 billion for the first half of 2020, with first-quarter impairments due to persistently low gas prices.

Cimarex is set apart from other energy producers, and especially natural gas producers, for its capital discipline, its more successful pivot towards oil, its good cash flow, its dividend growth, and its focused operations. I recommend it for these reasons, along with increased upside optionality (finally) in natural gas prices.

*Please note that throughout this report the heat content of natural gas is assumed standard at 1000 British Thermal Units (BTUs) per cubic foot. Thus, a million BTUs or 1 MMBTU can be used interchangeably with a thousand cubic feet (1 MCF).

Natural gas came into the second quarter weakened by persistent oversupply, a warm 2019-2020 winter that undercut prices, and yet more oversupply from “forced” (associated) production as U.S. oil drilling ramped up to 13 million BPD.

Beginning in February, a coronavirus tsunami swept through the world, causing most countries to lock down in attempts to defeat the contagious, sometimes-deadly virus for which no vaccine existed. Then a second black swan alighted in the energy market. Although the virus had already led to a demand drop of as much as 30% for oil, Saudi Arabia and Russia (curiously) decided to fight a vicious price war by flooding the market with crude, way oversupplying already-reduced demand.

Second-quarter results for many sectors, except tech companies and those meeting emergency food and medical needs, dropped precipitously. Recovery has started throughout the economy, but it remains fragile in both the oil and natural gas markets.

Although revenues for the quarter were $249 million, operating expenses were $1.432 billion. This included charges of:

*-$942.2 million for impairment of oil and gas properties

*-$196.6 million for depreciation, depletion, amortization, and accretion, and

Net cash from operating activities was $144.7 million in the second quarter compared to $414.0 million for the same quarter a year ago. After dividend payments this left $26 million of free cash flow, extraordinary in such a weak quarter. 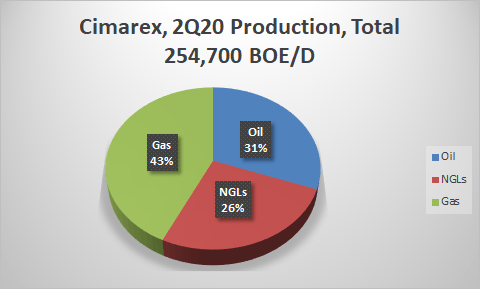 With these prices it is no surprise that on a revenue basis for 2Q, although oil was only 31% of volumetric production, it accounted for nearly twice as much – 56% – of revenues.

End-of-day prices Friday, September 4, 2020, were $39.77/barrel for West Texas Intermediate (WTI) crude oil at Cushing, Oklahoma, and $2.59/million British Thermal Units (MMBTU) for natural gas at Henry Hub, Louisiana. The five-year patterns for each are shown below. Oil prices could fall again with even marginal overproduction; gas prices recently strengthened on big “power burns” (use in electricity generation) over the summer and a better liquefied natural gas export market. There is also seasonal demand as gas is put into storage to meet winter consumption needs. 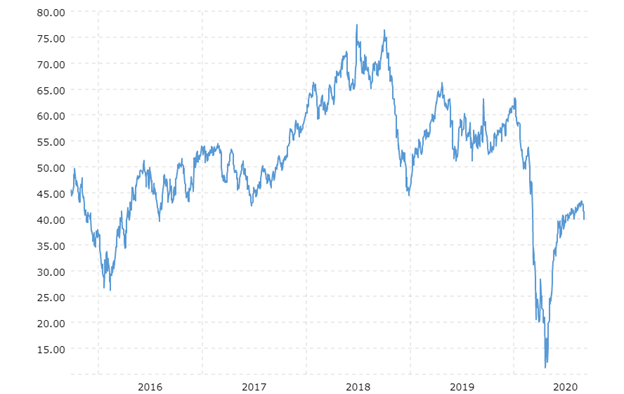 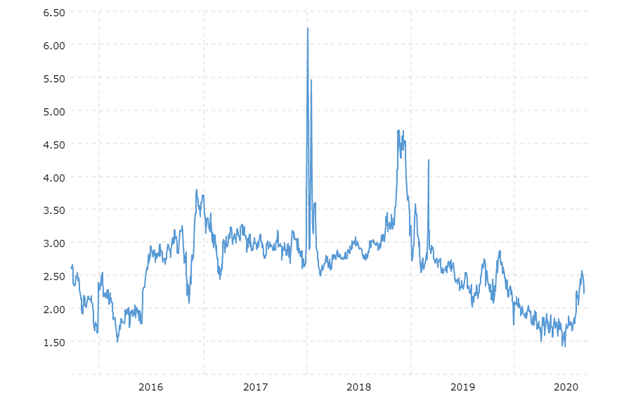 At the end of 2019, Cimarex Energy’s proved reserves were 619 million BOEs. As shown in the chart below, they comprised:

Reserve estimators DeGolyer and MacNaughton define “sales gas” as “the total gas to be produced from the reservoirs, measured at the point of delivery, after reduction for fuel usage, flare, and shrinkage resulting from field separation and processing.” 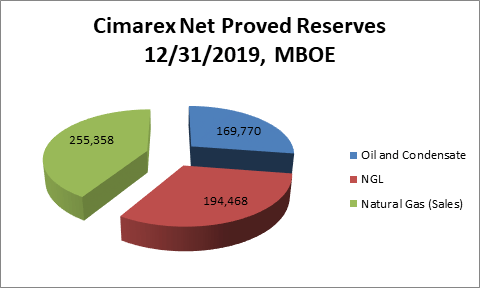 The SEC PV-10 value estimated for these reserves was $3.63 billion. 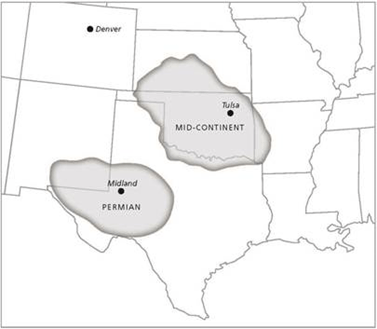 Cimarex Energy is an Oklahoma and Permian (Delaware sub-basin) gas and oil- producing company. The company is headquartered in Denver, Colorado.

In the west Texas and eastern New Mexico Delaware sub-basin of the Permian, Cimarex competes with virtually every producer. A few of these are Apache (APA), Chevron (CVX), Diamondback Energy (FANG), Exxon Mobil (XOM), and Parsley (PE). The company also faces significant competition from private companies.

Due to its heavier concentration in natural gas (and natural gas liquids), Cimarex also resembles, and competes with, Cabot Oil & Gas.

Cimarex Chairman and CEO Tom Jorden noted that due to the challenging price environment of the second quarter, the company decreased capital spending and curtailed May production volumes. With better prices, the company has resumed activity-adding three rigs in the third quarter and restarting completions in September. Total capital investment for 2020 is projected at $600 million with more than two-thirds of that allocated to drilling and completion.

It is hard to overstate what an accomplishment it’s been for Cimarex – a mostly gas and NGLs company until a few years ago – to stay not just solvent but to continue to grow. Many natural gas producers, most notably Chesapeake (OTCPK:CHKAQ), have been forced to enter bankruptcy. Oil and gas companies of all stripes took on more debt than they found themselves able to service once the Covid-19 and oil price war crises hit.

Cimarex’s beta is 2.4, considerably more volatile than the overall market but in line with its status as a mid-sized independent oil and gas producer in the very turbulent 2020 energy environment.

At June 30, 2020, Cimarex had $2.94 billion in liabilities, including $1.99 billion of long-term debt. With $4.87 billion in assets, the liability-to-asset ratio is 60%. Although this is high, Cimarex is in better shape than many of its oil (and especially gas) sector brethren.

The company’s mean analyst rating is a good 2.2 – “buy” leaning slightly toward “hold” – from the twenty-eight analysts who follow it.

At present, market capitalization is $10,800/flowing BOE but $35,200 per flowing barrel of oil. For perspective, both Devon and Apache had similar metrics in June, and both are also gas-leaning producers.

Cimarex Energy’s enterprise value (EV) is $5.12 billion and, as noted, its market capitalization is a little more than half that level at $2.75 billion. With a trailing twelve months’ EBITDA of $1.26 billion, the EV/EBITDA ratio is a highly attractive 4.1.

The company pays a dividend of $0.88 for a current yield of 3.3%, exceptional for a mid-sized oil and gas producer.

I recommend Cimarex for its capital structure stability – the company resisted the siren call of additional debt – its capital spending discipline, its focus on returning money to investors via a 3.3% dividend, its free cash flow, its investor-friendly EV/EBITDA ratio, and its calm addition of Permian oil (via the Resolute acquisition) to its base of MidContinent natural gas and NGL production.

Even slightly higher gas prices would be a well-deserved bonus for Cimarex as it managed to soldier through low gas and NGL prices for the last few years. The company quickly clamped off capital expense hemorrhaging when the twin Covid-and-oil price war disasters occurred in the second quarter, and it has optionality with its natural gas production (another way of saying the most likely direction for natural gas prices is up).

Disclosure: I am/we are long CVX, FANG, PE. I wrote this article myself, and it expresses my own opinions. I am not receiving compensation for it (other than from Seeking Alpha). I have no business relationship with any company whose stock is mentioned in this article.

Previous PostA Few Of The Many Reasons To Celebrate The United StatesNext PostOil drops more than $1 after Saudi price cuts, demand optimism fades