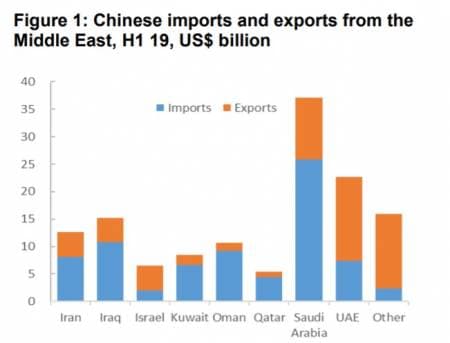 – China is the largest oil importer in the world and its vulnerability lies in its dependence on oil flows from the Middle East. China’s oil imports from the region have surged from 0.33 mb/d in 1998 to 4 mb/d in 2018.

– The Abqaiq attack highlighted the stakes. “With over 1 mb/d of Chinese refining capacity designed with Saudi crude as baseload, and imports from Saudi at 1.6 mb/d between January and July 2019, Chinese buyers had reason to panic,” the Oxford Institute for Energy Studies wrote in a report. And “yet on the whole, they remained relatively sanguine.”

– Aramco went to lengths to restore capacity and ensure that shipments were not interrupted. “Perhaps counter-intuitively then, the attacks also highlighted the importance of demand security as large oil producers are opting to supply their biggest client,” OIES said.

– If Saudi shipments were interrupted, China has a strategic petroleum reserve that it could draw upon, as well as commercial stocks. While precise figures are not disclosed by Beijing, OIES estimates that China has 800 million barrels in combined SPR and commercial stocks. 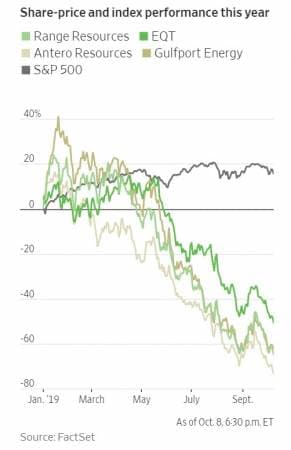 – Energy stocks have performed extremely poorly this year, but natural gas-focused drillers are in particular danger.

– “We are viewing today’s selling as the beginning of a more sustained price decline,” trade advisory Ritterbusch & Associates told clients in a note.

READ ALSO  Is This The Most Exciting ESG Play Of 2021?

– While low prices affect all producers, the Permian-focused gas producers are really designing their businesses around more lucrative oil production. Gas is a byproduct.

– Appalachia-focused companies are in a bind. Gulfport Energy (NASDAQ: GPOR) is down by nearly two-thirds year-to-date; EQT (NYSE: EQT) has fallen by half; Antero Resources (NYSE: AR) is off by 75 percent.

– EQT is the largest gas producer in the country, and it recently announced that it would layoff 800 people. 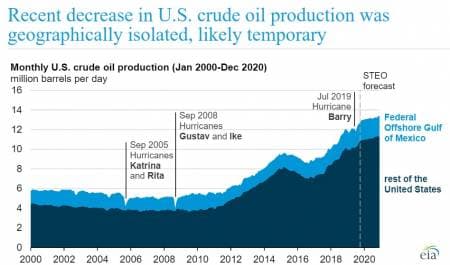 – U.S. oil production declined by 276,000 bpd in July, but the drop was largely due to the disruptions to offshore oil fields from a hurricane.

– The EIA said the decline was “temporary and geographically isolated” to the Gulf of Mexico, and that U.S. oil production would continue to increase through the remainder of the year.

– However, the agency also lowered its forecast for WTI prices for 2020 by a whopping $5 per barrel in its latest outlook. WTI is expected to average $51.19 in the second quarter of 2020, down from over $56 previously.

– Interestingly, the agency only lowered its 2020 production forecast by 60,000 bpd, expecting an average of 13.17 mb/d next year. The cut seems rather modest given the pronounced reduction to its pricing forecast. 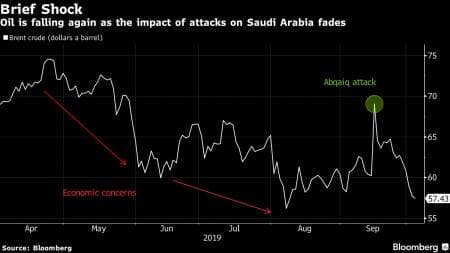 – OPEC supply outages are at multi-year highs, but the softening global economy is the only thing that seems to matter right now.

– Top executives at Vitol and Trafigura, the largest oil traders in the world, predict that oil prices will be stuck in the $50s in 2020 due to softening demand.

READ ALSO  States where the most people migrated to in 2020

– “Particularly with the current trade environment and a strong U.S. dollar, I would say there’s further downside in the short term,” Trafigura CEO Jeremy Weir said at the Oil & Money Conference this week.

– Still, a shortfall in upstream investment could cause a rebound in prices in a few years as the pipeline of new projects dries up. But it is remarkable how low the “rebound” might be.

– Gunvor CEO Torbjorn Toernqvist said that prices might rebound to only $70-$80 per barrel within five years. 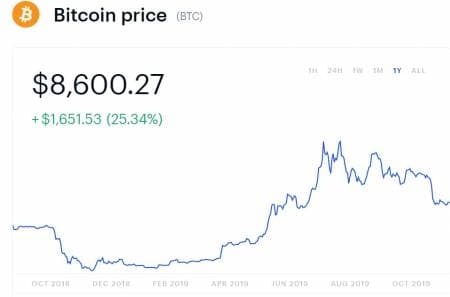 – After crashing late last year and remaining in the doldrums for the first quarter of 2019, Bitcoin slowly began to stage a rally, which really accelerated in June.

– One problem for Bitcoin is that it has become almost entirely a speculative asset, and not a real form of currency. “Bitcoin economic activity continues to be dominated by exchange trading,” Kim Grauer, senior economist at Chainalysis, told Bloomberg earlier this year. “This suggests Bitcoin’s top use case remains speculative, and the mainstream use of Bitcoin for everyday purchases is not yet a reality.”

– Bitcoin is down by a third since August, but is up 25 percent since the start of the year. 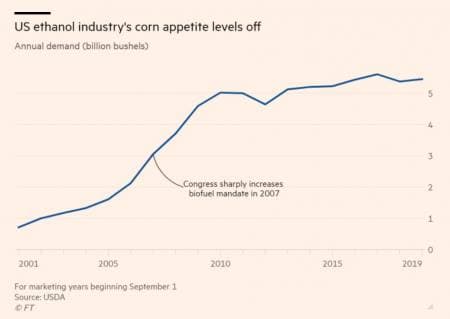 – A week ago, the Trump administration unveiled its highly-anticipated fix for ethanol markets, which the government had damaged by issuing a slew of waivers to oil refiners, absolving them of their federal ethanol blending requirements.

– The Trump administration announced a plan that would keep volumetric standards at 15 billion gallons for 2020, but would also keep the waivers given to small refiners. In other words, larger refiners would be required to pick up the slack.

– The move should shore up ethanol demand, but after an initial rise, prices for renewable identification numbers (RINs) fell sharply. By Monday, RIN prices were trading at 20 cents per gallon, down 16 percent from the previous week, reflecting “disappointment” in Trump’s proposal, according to the FT.

– 18 of around 200 ethanol plants have closed within the last year. 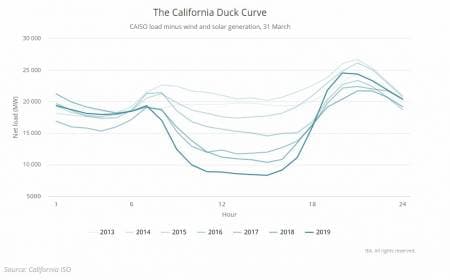 – The “belly of the duck” has grown faster than anticipated. As the IEA notes, five years ago California thought midday demand would fall by 40 percent by 2020, but in reality, demand fell by two-thirds by 2018 as more solar was added.

– As a result, other electricity generation needs to be curtailed during midday.• Deeper decarbonization will require integration of energy storage, EVs, smart grid technologies and dynamic pricing.

– If the world is to meet the targets laid out in the Paris Climate agreement, it would require nearly $8.5 trillion invested in renewables.