Li Tianhui had high hopes when she signed up for a free training programme for make-up artist in her neighbourhood, six months after she lost her sales assistant job during the coronavirus outbreak.

“I was having trouble landing a position because of a lack of skills,” said Ms Li, a 33-year-old from Chengdu, a south-western Chinese city. “I thought the course could address the problem.”

But the 10-day programme, funded by the city government, failed to help Ms Li, who struggled to choose the correct eye shadow in a job interview a few days after the training.

“The course didn’t teach us marketable skills,” said Ms Li, who is still searching for a job. “Teachers paid more attention to making sure we checked in by touching a fingerprint scanner before entering and after leaving the classroom.”

Ms Li is among the more than 50m jobless and low-income workers Beijing is seeking to retrain after the pandemic drove up unemployment and forced many workers to accept pay cuts.

However, the re-education campaign, the largest of its kind in the world’s most populous nation, has done little to boost employment. Critics said the programme had failed to meet the needs of the market because of a lack of investment in the initiative as well as the ineffective state-dominated professional certification system.

“China’s government-backed professional training system is a waste of public resources”, said a government adviser in Chengdu, who did not want to be named. “The job should be left to the private sector.”

Despite its huge workforce, China lacks the skilled labour needed to power its increasingly sophisticated economy. The skills shortage is especially pronounced among the country’s 290m migrant workers, with more than two-thirds saying they had no training before entering the labour market.

For unskilled workers, the pandemic has raised the threat of being laid off. A study in July by Peking University found that up to 9 per cent of Chinese adults lost their jobs this year and have failed to find a new one, partly because they lacked the required training.

Since the outbreak of the pandemic, the Chinese Communist party has repeatedly set employment as a priority because mass lay-offs threaten social stability.

That prompted Beijing to launch a nationwide campaign to retrain its working and jobless adults. The Ministry of Human Resources and Social Security said in June that China would provide free skills training for more than 14m migrant workers over the next two years.

That followed an announcement last year by the state council that pledged to spend Rmb100bn ($15bn) training more than 50m workers in the three years ending 2021.

Multiple vocational schools in Chengdu and surrounding cities, known for their large number of migrant job seekers, reported a surge in students for the free training courses that ranged from cooking to auto repair.

Li Zhi, owner of a cooking school in the south-western city of Zigong, said enrolment for subsidised courses more than doubled this year to more than 1,000 from 2019.

“We are prospering on the back of a weak economy,” said Mr Li.

The training boom, however, has not helped many unemployed workers find a job. Interviews with multiple vocational schools in Chengdu and neighbouring cities showed that just a fraction of adult students secured relevant jobs within three months of graduation. 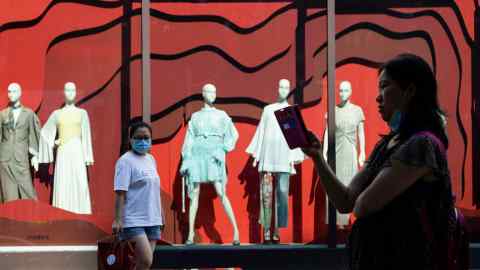 “Don’t expect our course to help you find good employment even when the government says so,” said a director at Chengdu-based Sichuan Keli Vocational School, who also wished to remain anonymous. His school trained more than 1,000 jobless workers last year.

A lack of funding is partly to blame for the programme’s limited success. Vocational schools said state support was not nearly enough to cover the cost of teaching. In Dujiangyan, a city near Chengdu, Qidi Vocational School receives a subsidy of Rmb800 per person for make-up training that normally costs more than Rmb2,000.

The gap, said Kang Zhongyu, principal of Qidi, meant the school could either provide well-rounded training at a loss or cut corners to make ends meet. The city government allowed Qidi to trim the length of the course to 120 hours from the standard 300.

“Our goal is to help students learn the basics rather than becoming an expert,” said an official at Dujiangyan Human Resources and Social Security Bureau, which oversees the city’s skills training.

Beijing has set a low bar for programme assessment, with most courses issuing certificates to students who pass a written test even when hands-on training matters more.

At Dujiangyan Trade School, one of the largest in the city, students of the subsidised cooking course can graduate after completing a multiple choice test of 30 questions.

An official at DTS said the government grant did not cover the cost of food. “The best we can do is to test your knowledge of nutrition theory,” he said.

To address the problem, many cities began subsidising students who pass the more rigorous practice exam. The efforts, however, were hobbled by a state-led skills certification system that lagged behind market demand. While private trainers have a better idea on which skills the labour market needs, Beijing has been slow to open up the certification industry.

Employers are giving up on the programme.

“All I want is someone who can make kung pao chicken that attracts customers to come back,” said Zhang Lin, owner of a restaurant in Chengdu. “A 14-day training or a certificate won’t serve that purpose.”