The volume of goods and services traded between the U.S. and China during July 2020 rose over their June 2020 levels as the economic recovery from the coronavirus recession continued. 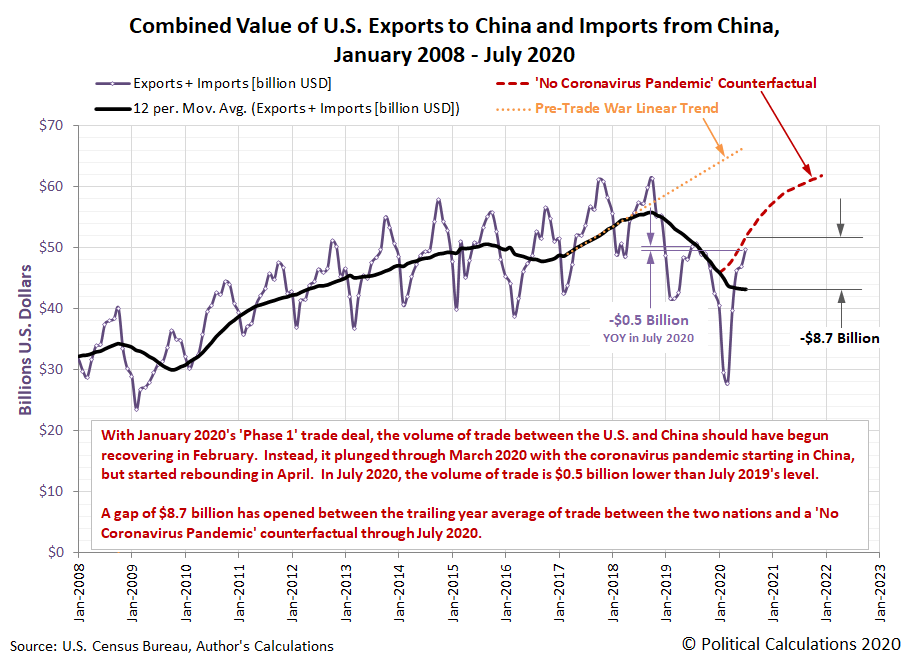 Since the end of 2019, an $8.7 billion gap has opened up between the trailing twelve-month average of the value of U.S.-China trade and a counterfactual based on a reasonable estimate of what that trade would look like following January 2020’s ‘Phase 1’ trade deal between the two nations. While this measure showed little change in June 2020, it may be on the verge of turning upward.

That’s because August 2020 has seen marked improvement among large population states battling spreading coronavirus infections in the U.S., which is allowing many to lift restrictions on businesses.

August also saw the U.S. and China agree to “push forward” the implementation of the ‘Phase 1’ trade deal between the two countries.

That positive development comes after the disclosure going into August 2020, China was “far behind” its commitment to purchase U.S.-produced goods under the terms of the agreement.

Chinese purchases of U.S. goods are running well behind the pace needed to meet a first-year increase of $77 billion specified in the deal, according to official data.

While China recently ramped up buying of farm goods including soybeans, it is far from meeting its commitment to buy $36.5 billion worth of U.S. agricultural goods under the deal – purchases that Trump has counted on to bolster support in farm states that backed him in the 2016 election.

The United States exported just $7.274 billion in agricultural goods to China in the first half of the year, the U.S. Census Bureau said.

The U.S. comments “showed that they think we are going to keep buying from the U.S., at least before the election takes place. And we will,” said one agricultural goods trader with a Chinese state-owned firm who is not authorized to speak to the media.

Since the meeting, Bloomberg has reported China will buy a “record amount of American soybeans in 2020”. Meanwhile, Reuters confirms China has made several massive buys of soybeans and has also bought record levels of U.S.-produced beef.

These sales are consistent with China seeking to cope with a severe shortage of pork in the country, which resulted from its devastating epidemic of African Swine Fever among its domestic hog producers in 2019, where the soybeans will feed the domestic herd the country seeks to rebuild. The beef sales represent an alternative protein to supplement Chinese diets while pork is in short supply.