China treads cautiously in the face of US sanctions

When Chinese diplomats began spreading conspiracy theories in March suggesting that the US army had brought coronavirus to China, the claims looked set to derail an already acrimonious relationship between Beijing and Washington.

But in recent weeks, despite rounds of US sanctions targeting China’s leading technology companies and officials in Hong Kong and Xinjiang, Beijing has struck a more conciliatory note.

“China is always ready to work with the United States,” Zhao Lijian, Chinese foreign ministry spokesperson and a previous proponent of theories linking the US military to the outbreak of Covid-19 in Wuhan, told reporters on Monday.

“We are prepared for a tough slog, through thick and thin, to pass this crisis in China-US ties,” he said.

China’s wait-and-see approach to the latest round of US sanctions reflects what experts say is an effort to minimise further antagonism during the US election season and its uncertain outcome.

China has yet to announce specific measures in response to executive orders signed by President Donald Trump last week. Citing a threat to national security the orders targeted one of China’s most valuable start-ups, ByteDance, and WeChat, the messaging, payments and all-round superapp of China’s second largest technology group, Tencent.

US sanctions of high-ranking Chinese officials over the mass internment of Muslim Uighurs in Xinjiang and a draconian state security law in Hong Kong — both issues liable to ignite nationalist fervour from Chinese hawks — have similarly failed to incite a harsh response from Beijing, which has avoided going after Trump’s inner circle in retaliation.

China has adjusted its approach to the US and is increasingly adopting “targeted, proportionate and surgical” responses, said Feng Chucheng, a political risk analyst and partner at the independent research firm Plenum.

“China has been very cautious,” he said. “At the same time, it has a domestic audience that looks to Beijing for retaliation, so it has to take a proportionate response.”

For example, Mr Feng noted, China chose to respond to US measures targeting Hong Kong officials by imposing sanctions on Senators Marco Rubio and Ted Cruz for a second time, rather than expanding its blacklist of US officials.

This change in tack may explain why Beijing’s threat of blacklisting US companies on an “unreliable entities list” in retaliation for Washington’s blacklisting of Chinese telecoms group Huawei has yet to be carried out, despite being announced in May last year.

The caution marks a departure from the behaviour of China’s foreign policy establishment during the early days of the coronavirus pandemic when its diplomats embraced smear tactics in response to international criticism of its handling of the outbreak.

China appears to have now leashed its so-called “wolf warrior” diplomats, named after a blockbuster Chinese action film featuring a special ops agent who prefers to shoot his way out of conflicts.

Since early July, China’s top diplomats have instead been on a media blitz to send a signal that Beijing is willing to talk and wants to stop the bottom falling out of its relationship with Washington.

Wang Yi, the foreign minister, warned in a speech that ties were at their lowest point since formal diplomatic relations were established in 1979 and called for both sides to pull back from touching upon “red lines” of the relationship.

Since the latest round of US sanctions, China has doubled down on its prognosis that the ties will worsen unless the most serious disagreements in the relationship are shelved.

State Councillor Yang Jiechi, who outranks Mr Wang in the Communist party hierarchy, last week wrote that confrontation between China and the US would be a “disaster”.

Instead, Mr Yang dangled the prospect of saving the all-but-forgotten trade war truce signed in January. “We hope the US can work with China to create favourable conditions for implementing the phase one trade deal,” he wrote.

The rhetoric has not, however, stopped China from engaging in displays of military strength in the South China Sea or over Taiwan, the democratic and independently ruled island that China claims as its own.

On Tuesday, during a meeting between health secretary Alex Azar, the highest ranking US official to visit the island in decades, and Taiwanese president Tsai Ing-wen, Chinese fighter jets crossed the median line of the Taiwan Strait, in what Chinese state media said was a warning to the US. 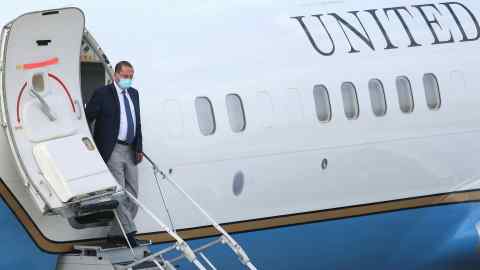 Lu Xiang, a scholar at the state-backed Chinese Academy of Social Sciences in Beijing, said China did not target core members of Trump’s administration “because once China sanctions high-rank officials, like [secretary of state Mike] Pompeo, then it’s very likely that there would be a total severance of dialogue”.

China’s calculations look beyond the current US administration and this election cycle, unlike Mr Trump’s which is primarily focused on getting votes, Mr Lu added.

But China’s hopes to immediately halt the downward spiral may be fantasy, said Shi Yinhong, an international relations scholar at Renmin University in Beijing.

Mr Shi believes “nothing substantial” will happen to reverse the deterioration of ties in the next six months unless both sides take a fundamentally different approach. “Up to now, both sides have strongly condemned the other from . . . totally opposite official positions [and the] discourse is full of pompous rhetoric,” he said.