China cleans up in Latin America as US flounders over coronavirus

Home to almost half of the world’s new cases of coronavirus, Latin America is a long way from winning the war against Covid-19. But there is already one victor in the region: China.

Beijing has moved swiftly in Latin America to donate medical equipment and supplies, offer technical help and express solidarity. Its ambassadors have flooded social media with messaging about Chinese co-operation and solidarity, eclipsing the US, the region’s traditional power.

Wang Yi, China’s foreign minister, capped Beijing’s efforts with a virtual video conference for his Latin American and Caribbean counterparts last week, offering $1bn in loans to help buy a Chinese-made vaccine once it becomes available and calling for closer relations with the region, a key supplier of food and metals, post-pandemic.

“It’s quite remarkable what is happening, the scale of the activity,” said Margaret Myers, director of the Asia-Latin America Program at the Inter-American Dialogue in Washington. “We have seen more than 250 instances of commitments to shipments of equipment, donations and sales ranged across the whole Latin America and Caribbean region.”

The impetus has come right from the top in Beijing: President Xi Jinping has telephoned at least six Latin American leaders since the virus hit the region to discuss assistance.

We’ve left the door open for the Chinese. China was shipping personal protective equipment at the time when we were hoarding it in the US and putting in export restrictions

China’s private sector has joined in. Jack Ma, founder of the ecommerce group Alibaba, tweeted about his donation of 2m masks, 400,000 test kits and 104 ventilators to 24 Latin American countries. The telecoms equipment group Huawei, which is fighting a global battle with the US over deploying its 5G mobile technology, is offering artificial intelligence capabilities to help diagnose coronavirus cases in the region.

While Beijing’s “mask diplomacy” has been a global effort, experts say the strength of its push in Latin America has special importance because of the region’s status as a traditional US sphere of influence and the fact that it has been hit so hard by the virus.

Early in the crisis, as the number of infections spiralled in Latin America, and governments scrambled for help, the US hit the headlines for all the wrong reasons: shipments of desperately needed ventilators and medical supplies destined for the region were held up at US ports and in some cases diverted for domestic use, officials say.

When the US did dispatch assistance, it came not in the form of medical help but a fleet of warships to crack down on drug trafficking.

“We’ve left the door open for the Chinese,” said José Fernández, who was US assistant secretary of state for economic affairs under the Obama administration, of the American response. “China was shipping personal protective equipment at the time when we were hoarding it in the US and putting in export restrictions.”

Struggling to control the pandemic as it ripped through the region’s sprawling urban slums and overwhelmed its inadequate hospitals, Latin American officials were only too glad to receive Chinese help.

By contrast, Latin American politicians who criticised China over the pandemic were quick to feel Beijing’s wrath. China’s diplomats in the region were unsparing in their attacks on those challenging the official narrative.

Brazilian president Jair Bolsonaro’s son Eduardo, an influential congressman, came under fire after referring to Covid-19 as the “Chinese virus”. In an aggressive newspaper article in April addressed personally to Eduardo, China’s consul-general in Rio de Janeiro accused him of being brainwashed by the Americans.

One of the very few Latin American nations not to receive Chinese medical aid this year has been Paraguay, Taiwan’s only diplomatic ally in South America.

Once the virus recedes, Beijing is hoping that its “mask diplomacy” will translate into increased trade and investment. Already the biggest trading partner for Brazil, Chile, Peru and Uruguay, China is likely to add more nations such as Argentina to that list this year as its economy picks up. The contrast between China’s rapid economic recovery and the chaos still engulfing much of the US is not lost on Latin Americans. 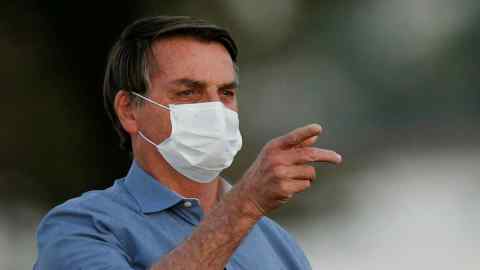 More than a dozen Latin American countries have already signed up to Beijing’s Belt and Road infrastructure drive and Mr Wang said China was “seeking opportunities in the current crisis to advance Belt and Road co-operation”. Total China-Latin America trade has increased from $17bn in 2002 to almost $315bn in 2019, according to the US congress.

“China will continue to deepen co-operation in infrastructure, energy, agriculture and other traditional fields. It also looks forward to branching out into public health, digital economy and other new infrastructure, and building a China-[Latin America and the Caribbean] health silk road and a China-LAC digital silk road,” the Chinese foreign ministry quoted Mr Wang as saying.

READ ALSO  Hospitalisation of Covid patients surges across US

China’s support for Latin America in the pandemic is also reaping diplomatic dividends. When the UN Human Rights Council discussed Beijing’s sweeping national security law imposed on Hong Kong, Cuba sponsored a resolution in support of the law which attracted 53 votes in favour, including those of Venezuela and Nicaragua. A resolution from the UK attacking the Chinese crackdown attracted just 27 votes. Tiny Belize was the only Latin American country to back the British proposal.

Mr Fernández summed up the Chinese diplomatic push amid the pandemic thus: “Ten years ago we would not have thought they would be this far along. But moving the discussion away from the origins of the virus to talking about how they will provide medicines to your grandmother: that’s a powerful statement.”