Chicago will impose a curfew on non-essential businesses and has ordered bars without food licenses to cease indoor service from Friday as the city attempts to slow the quickening spread of coronavirus through the Midwest.

The new measures, announced by mayor Lori Lightfoot on Thursday, came as the states of Illinois, Indiana and Ohio reported their biggest one-day jumps in new coronavirus cases since the start of the pandemic.

Faced with a recent surge of cases in Chicago, the third most populous US city, restaurants will be required to close at 10pm starting October 23 while indoor drinking will be prohibited at bars without food licenses, Ms Lightfoot said. Liquor sales will end at 9pm and a curfew running from 10pm to 6am will be imposed for other non-essential businesses.

Ms Lightfoot had warned of the potential of new restrictions at the start of the week barring a rapid and “dramatic turnaround” in Chicago’s coronavirus metrics. At the time, she said average daily case rates in the city had reached 500 a day, a more than 50 per cent increase so far this month, which had also been accompanied by a “worrying increase in hospitalisations.”

The case rate is now “over 640 cases on average a day,” Ms Lightfoot said at a media briefing on Thursday. “We are, no doubt whatsoever, in the second surge. This is what it looks like.”

Illinois’ health department revealed on Thursday that 4,942 people tested positive for coronavirus over the past 24 hours, The latest jump in cases is one of the state’s biggest one-day increase on record, according to state data.


Deaths in the US on Wednesday, according to Covid Tracking Project data

Ohio set a daily record for new cases for the second day running, with 2,425 infections reported by authorities on Thursday. Indiana’s health department revealed a record jump of 2,880 new infections.

Wisconsin reported 3,413 new cases on Thursday, its smallest increase in eight days. The state, one of the new coronavirus hotspots in the US, had a record 4,591 infections on Tuesday as the health department cleared a backlog of cases that stemmed from a temporary pause to its data processing system over the weekend.

All 12 states in the Midwest region of the US have reported rolling record seven-day average case rates since the start of this week, according to Financial Times analysis of Covid Tracking Project data.

Across the US, 15 states have reported a record number of people currently in hospital with coronavirus during the past week, according to FT analysis of Covid Tracking Project data as of Wednesday. Five of those — Iowa, Missouri, Nebraska, Ohio and Wisconsin — are in the Midwest.

Overall, the US reported 57,294 coronavirus cases, and 994 deaths, on Wednesday, according to Covid Tracking Project data.

Parts of the Midwest have in recent weeks reimposed restrictions on parts of their economy in an effort to slow the spread of coronavirus, which is advancing quickly through the region and straining health facilities. 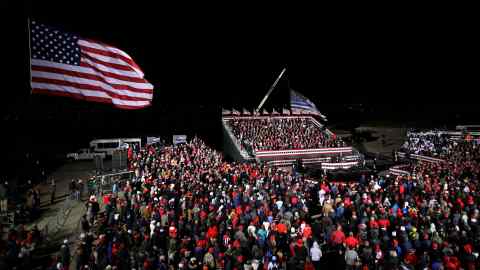 Students at the University of Michigan’s Ann Arbor campus were told to stay in their current designated residences for the next two weeks after the surrounding county, in collaboration with the college, issued a stay-in-place order for its more than 30,000 undergraduate students.

Wisconsin governor Tony Evers’ administration earlier this month announced capacity limits on the number of customers in bars and restaurants as well as gatherings in indoor spaces.

Last week, a lobby group representing thousands of Wisconsin bars received a temporary restraining order from a judge that would block the administration from enforcing the restrictions. This was overturned by another Wisconsin judge on Monday, who reimposed the original order.

Nebraska on Wednesday brought into effect new guidelines including limiting indoor gatherings to 50 per cent of total venue capacity, down from 75 per cent previously. Indoor bars and restaurants will require customers to remain seated and the number of people sitting at a single table will be limited to eight.

Previous Post‘Worst Is Yet To Come’ – Retailers Fortify Stores As Election Chaos NearsNext PostSE: Hermes Third-Quarter Beat Gets a Boost From China Demand