Last month, I made the argument that the CHF/USD has significant upside from here.

My reason for making this argument was that inflation remains a possibility over the longer-term with a continuing of quantitative easing to stimulate the economy. Given that Switzerland is an export-oriented economy, higher inflation over time is equally as unattractive as a strong franc – as this will also increase the cost of exports.

That said, my bullish view on the Swiss franc was more on a long-term basis, as inflation does remain negative and the Swiss National Bank shows no signs of easing quantitative easing for the foreseeable future.

However, we have seen significant upward momentum in the CHF/USD over the past month: 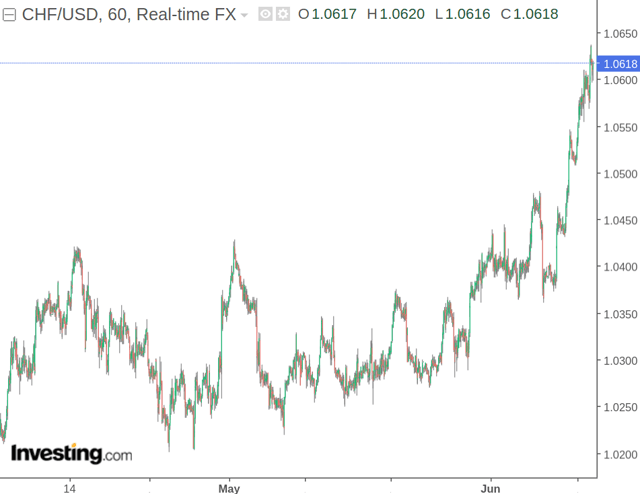 Up until recently, global stock markets have been rallying as negative risk sentiment over COVID-19 has been subsiding.

For instance, the S&P 500 rallied strongly after March, but is now starting to take a dip on concerns over a second wave of COVID-19 and a gloomy economic outlook from the Federal Reserve.

Given that the Swiss franc is a risk-off currency, one can expect it to rise under such circumstances irrespective of the domestic economic situation in Switzerland itself.

Moreover, the market recovery has in large part been predicated on the assumption that the economy would recover quickly once the virus had subsided (hence the use of the term “V-Shaped Recovery”), but a second wave would throw this into disarray. An additional 1.5 million Americans have filed for unemployment insurance, further underscoring the severity of this crisis. Since the likelihood and severity of a second wave is as of yet unknown – it is likely that markets could remain lower for some time as investors grapple with uncertainty from this virus.

Let’s take a longer-term look at the CHF/USD.

As it stands, the currency is trading on the higher end of the trend that we have been seeing over the past few years.

However, given that markets now appear to be taking the economic implications of the pandemic into account, demand for safe haven assets is likely to increase under such a scenario, including for the Swiss Franc.

While the Swiss National Bank has continued to reiterate that it is set to take rates lower if necessary, I do not see this as having much, if any impact on the Swiss franc. Rates in Switzerland are already negative and yet the currency is highly in demand as a safe haven.

After a significant decline, the euro has in fact been outpacing gains in the Swiss franc up until recently: 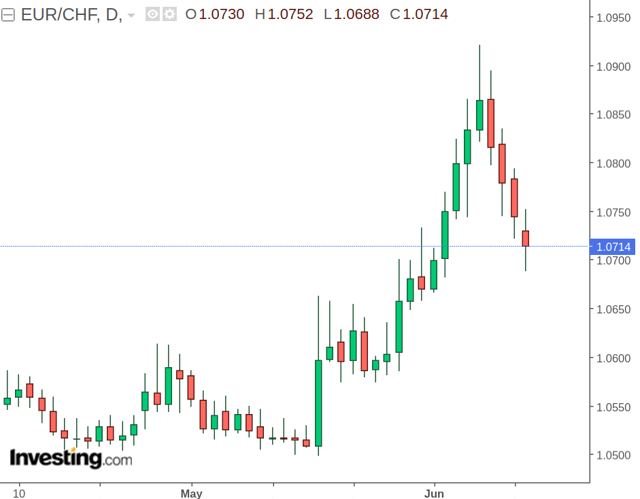 Should the euro hold on to gains against the franc, then the Swiss National Bank may choose to not be as aggressive in implementing further quantitative easing as exports to Europe would be less expensive with a stronger euro.

In this regard, I take the view that the Swiss franc will continue to push higher given that equity markets are beginning to lose their appeal and demand for safe haven assets starts to rise.