Traders this year have won spectacular bets on companies that, due to the shutdown situation in the U.S. and abroad, are expected to benefit from a conversion from retail sales to online. Chewy (CHWY), an online merchant that specializes in pet food and supplies, has been one of the big winners this year, rising 13% year-to-date amid a staggering bear market. Since its IPO in 2019 less than a year ago at just $22 per share, Chewy’s shares have rocketed up more than 50%.

The question for investors now: can Chewy’s spectacular run continue amid an extended global shutdown, or is it time to divest from this trade and plow money into more beaten-down names?

In my view, Chewy’s biggest weakness is its valuation. Bullish growth aside, and despite the expectation for a strong year in 2020, Chewy can’t escape the fact that it’s still a low-margin company (gross margins are hovering in the mid-20s) with negative GAAP profits and only breakeven cash flows. There’s little to support Chewy’s gargantuan $15 billion market cap, and investors should lock in their gains now.

We’ll acknowledge that Chewy does indeed stand to benefit from the spread of the coronavirus. In the short-term, the closure of pet stores as well as the reluctance of pet owners to leave their homes will drive a surge in Chewy’s online sales. In the long-term, Chewy is undoubtedly going to keep a good portion of the new customers that converted to its site under the coronavirus pressure. Pet food is a staple that can’t be avoided whether in good times or bad; and the need to purchase it despite retail shutdowns may have generated some free word-of-mouth marketing for the company.

The company has only so far reported results through December 2019, so we have yet to see the online demand shift caused by the virus – but we can imagine that it’ll be a huge tailwind to Chewy’s already-impressive growth in active customers. As of the fourth quarter, Chewy counted 13.5 million active customers, up 27% y/y versus active customers of just 10.6 million at the end of 2018.

Revenues, meanwhile, have grown 35% in the fourth quarter of 2019. Chewy’s strength owes in large part to success in its Autoship program, which essentially is a subscription service for pet owners who have their items shipped on a regular basis, creating a steady recurring revenue base. Sumit Singh, Chewy’s CEO, noted as follows on the Q4 earnings call on the success of Autoship:

Chewy’s management is (unsurprisingly) bullish on the business in the face of the coronavirus. For Q1, the company is projecting an acceleration in revenue growth to 35-37% y/y, outpacing Q4’s 35% y/y revenue growth rate (and management’s current guidance may even undercall the acceleration potential driven by the virus).

READ ALSO  What ‘Democracy’ Is Under Attack? 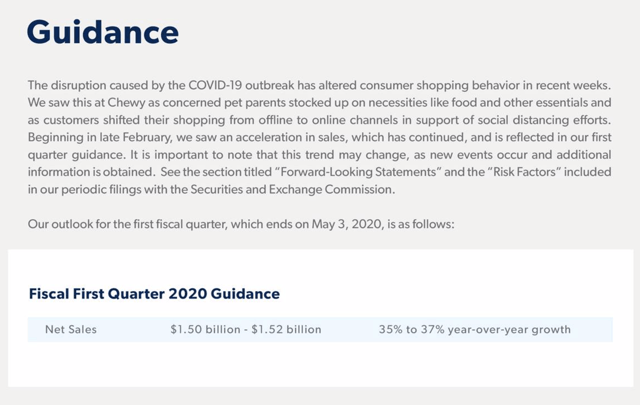 While we wait for Chewy’s first-quarter results, we can use data from Google Trends to confirm that search activity for Chewy, indeed, has soared. Google Trends indexes search volumes on a basis of 0 to 100, with a value of 100 representing the time period with the most active search queries. The company began the year with an indexed search volume of 57, while the previous week ended at 86 – indicating quite a substantial increase in the company’s online popularity. 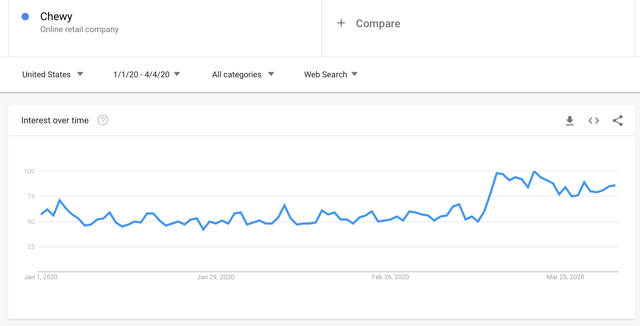 Wall Street consensus, as reported by Yahoo Finance, expects Chewy’s full-year revenues to hit $6.2 billion this year – up 28% y/y from FY19 sales of $4.85 billion. As previously noted, this expected growth rate may prove conservative is Chewy indeed saw such a strong surge in online traffic and succeeds in converting a new slew of pet-food buyers out of necessity.

Does Chewy’s valuation support a company with no profits, and thin gross margins with which to build economies of scale?

Sadly, Chewy’s bullish growth expectations are the only positive story we can spin on the company. In refuting a growth-oriented bullish thesis on this stock, we’ll raise an important question: what good is revenue growth if it can’t eventually be converted to profits?

Chewy’s outperformance in the markets has vaulted the company to a market cap of $13.30 billion. Its balance sheet, meanwhile, has $212.1 million of cash, putting its enterprise value at $13.09 billion. 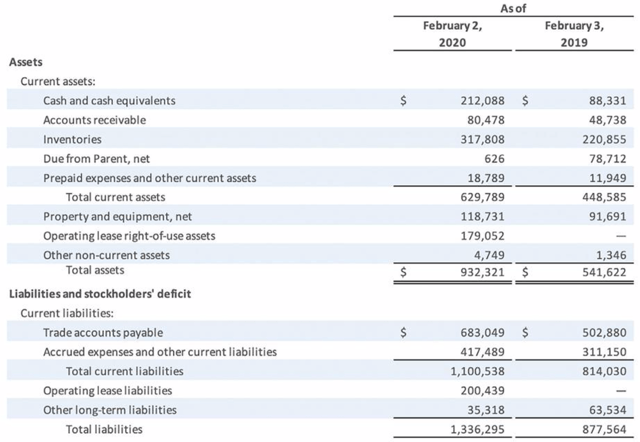 Here’s the problem with that outsized valuation: while Chewy’s current worth at ~2.1x forward revenues doesn’t sound overly aggressive, its eventual earnings and cash flow that should support Chewy’s valuation. Software and internet services companies can afford to be unprofitable and run at high revenue multiples for a long time because they boast high gross margins in the 70s to 80s. Once at a mature stage with a large revenue base, these companies can cut down their operating costs (mostly on sales and marketing) and start producing large cash flows.

This is not the case with Chewy. Despite reaching a ~$6 billion annualized revenue run rate, Chewy’s gross margin has remained low at 23.6% as of the end of FY19. And while that’s up substantially year-over-year, Chewy’s eventual gross margin gains are likely to be capped by the fact that, by its very nature, selling pet food (all food, in fact), is a low-margin business that relies on operating efficiencies to thrive. In other words, Chewy has to find opportunities to squeeze expense below the COGS line.

To its credit, Chewy is working on exactly that for 2020. The company plans to open an automated fulfillment center in Pennsylvania “later this year” (according to its Q4 shareholder letter) that is expected to reduce fulfillment costs per unit by up to 30%. But while this initiative is expected to yield cost savings, it will also cause a drain on the capex front. And unfortunately, Chewy is a bit light on cash. Its FY19 free cash flow was breakeven, and its balance sheet only has $212 million of cash – not exactly a robust “war chest” for a company that is expected to drive $6 billion in annual sales and has plans to corner a ~$100 billion annual market for pet supplies.

Here’s the key message in all this: Chewy’s eventual profitability relies on operational overhauls like the automated fulfillment center in Pennsylvania, but these efforts are costly. In FY19, Chewy already spent roughly $48 million on capex; new initiatives are likely to drive capex expenses higher in FY20. In addition, Chewy has noted that one of its principal risks this year is an outbreak at any of its existing customer service or fulfillment sites – though the company is prepared to divert these services elsewhere, operational overhauls will be another cost and drag on cash flow/margins this year. As such, we don’t see Chewy climbing out of its profitability hole anytime soon, despite its revenue growth.

A standard “benchmark” valuation used for the S&P 500 is a 15x multiple of earnings or cash flow; for Chewy to live up to its >$13 billion valuation at that multiple, it would need to generate ~$870 million in GAAP earnings or free cash flow. The company’s FY19 earnings and FCF, unfortunately, were -$252.4 million and -$2.1 million, respectively. Without substantial capital investment to drive operating margin improvements (unlikely due to Chewy’s thin $212 million cash balances, and the shutdown of capital markets for infusions of outside capital), Chewy is unlikely to generate any meaningful profits, at least in the near term.

Chewy’s substantial revenue growth, spurred by the coronavirus, is meaningless if it can’t convert those revenues into profit. Chewy’s razor-thin gross margin gives it precious little room for future operating margin improvement, which would anyway rely on capital investments and resources that Chewy doesn’t have at the moment. In my view, Chewy is heavily overvalued and investors should look to bet on other companies.